Four major snowstorms in week having an impact on Boston parishes 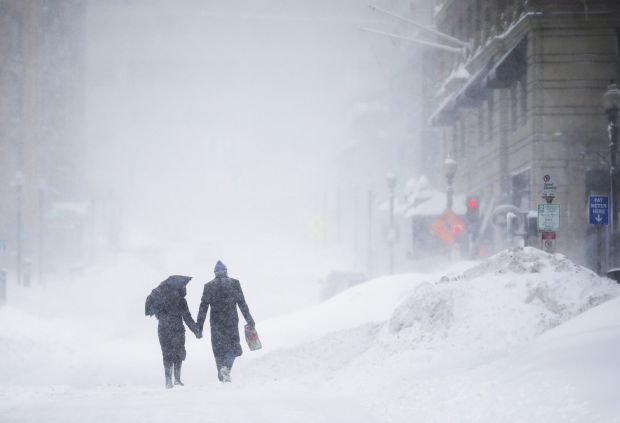 A couple walks hand-in-hand through the snow during a winter blizzard in Boston Feb. 15. With record snowfall for this time of year, parishes all over the Archdiocese of Boston face more than just the issue of digging out after each storm. (CNS photo/Brian Snyder, Reuters)

BRAINTREE, Mass. (CNS) — With record snowfall for this time of year, parishes all over the Archdiocese of Boston face more than just the issue of digging out after each storm.

Pastors interviewed by The Pilot, Boston’s archdiocesan newspaper, explained the impact of snowstorms — this year piled one on top of the other in one week. As of Feb. 24, Massachusetts was still digging out of 8 feet of snow left by four major winter storms.

With a variety of conditions facing urban, suburban, and somewhat rural parishes, The Pilot contacted pastors for their thoughts on the impact of blizzards and snowstorms in the parishes they serve.

Father Thomas S. Domurat, pastor of Most Holy Redeemer in East Boston, explained that in the tight streets of Boston parking remained limited if available at all, but the parish was facing additional challenges as a result of snowbanks piled high in the street.

“Our parking lot, a third of it is in snowbanks, so that reduces the amount of area for parking. We also had to wait a few days to get the rubbish removed because the removal truck couldn’t get in because of the large snowbanks outside. It couldn’t make the turn, so we had to bring the rubbish out onto the street one day for them to come get it. So, there is all kinds of issues involved, and it’s going to have an impact,” he said.

During the snowstorms themselves, parishes have faced the possibility of having to remain closed or cancel Mass. Father Domurat said as long as he is there — he lives on the premises — no such thing will happen.

“I never cancel. I’m here, so I’m going to say Mass. I go over to the church at 6 o’clock and if somebody comes, they can join me. If not, I would say Mass myself,” he said.

Reduced Mass attendance when parishioners simply cannot get to Mass because of whipping winds or driving snows has a twofold impact on the parish.

“Because people cannot find a place to park, they will not be able to come here for Mass, which means our collection was down over $2,000 last weekend and our plowing bill was over $2,000,” Father Domurat said in an interview after the Feb. 15 snowstorm.

As many parishes and buildings in Massachusetts do, the parish in East Boston also faces issues with ice dams — a buildup of ice near the eaves of a pitched roof that can lead to water damage and leaking.

“If this ice keeps building up in the gutters, we could end up with ice dams and leaks coming in. It’s hard to get some of that off because the roof is so high,” Father Domurat said.

In contrast, Father John E. Sheridan serves what is called the Cranberry Catholic Collaborative, which includes Sacred Heart in Middleborough, Sts. Martha and Mary in Lakeville, and St. Rose of Lima in Rochester.

In collaborative ministry, Father Sheridan could drive about 18 miles — according to Google Maps — on a day with Masses scheduled at all three churches.

“It’s been extraordinary. We have had to change Mass schedules. We have had to encourage people to stay home sometimes. It’s been very difficult to visit people, to get to places. It’s a glorious mess,” he said.

He said his staff has been very understanding as conditions changed with the weather, and schedules had to be adjusted. Father Sheridan said the parishes have chipped in to clear snow.

“The team of our three churches has really come together to make sure that all three churches, including the entire campus of Sacred Heart which has a very big campus, and they have worked their heads off to clear as much as they could,” he said.

Father Sheridan said communication became a key element to facilitate cooperation between the three parish communities. He said the collaborative used its website at cranberrycatholic.org, its Facebook page and a platform called Flocknote — an email and text messaging system developed specifically for churches to keep the three parishes connected.

“It’s been a great blessing of technology,” he said.

On his Facebook page, Father Sheridan regularly posts photos of the sun rising as he begins his day. In recent weeks the foreground has a thick coating of snow over what is normally a lake near where he lives in Lakeville. A photo of snow whipped up by the wind tagged at Sts. Martha and Mary bears the caption “Fiercely beautiful.”

“It is God’s creation. Beautiful as it is, it is also challenging. God presents these unique situations to us, and calls on us to give it our best,” Father Sheridan said.

PREVIOUS: Baby born after RU-486 reversal is ‘light of our life,’ says father