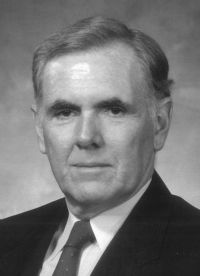 WASHINGTON (CNS) — A former Boston mayor and U.S. ambassador to the Vatican said his life’s work now is being an advocate for the use of adult stem cells in research and treatment of diseases.

Raymond Flynn, who was ambassador from 1993 to 1997, spoke with Catholic News Service about adult stem cells and bioethical issues in medical research as well as his own struggles on the issue.

Flynn’s advocacy began when his grandson, Braeden, was born with a rare neurological disorder which could only recently be diagnosed as SPTAN1, or spectrin alpha nonerythrocytic 1. Only six other people in the world are known to have the disease.

“I searched all over trying to find a cure or treatment for my grandson,” he told Catholic News Service. His search eventually led him to the Vatican, where he spoke with Popes John Paul II and Benedict, as well as several top researchers and policymakers in the area of adult stem-cell research.

“The Vatican has several people at the forefront of this issue,” said Flynn, a Catholic. These people are widely respected in the international science community and are working with scientists throughout the world while “discovering breakthroughs in the wellness revolution all over the globe.”

“A lot of countries are doing a lot of research and making a lot of progress,” Flynn added, while lamenting some of his own struggles to find an ethical treatment for his grandson.

In discussing what role his Catholic faith plays in his advocacy efforts, Flynn was quick to point out that research using adult stem cells greatly differs from research using embryonic stem cells: Research using cells from embryos is a practice opposed by the Catholic Church, but the church supports research and therapies utilizing adult stem cells, or those derived after someone is born. These can develop into a variety of specialized cells, alleviating degenerative illnesses by repairing damaged tissues.

“I’m very much pro-life, I’ve always been an advocate for the protection and dignity of all life from conception to natural death,” Flynn explained. “There was a great level of confusion in the church; many people think the church is opposed to (adult stem cells), but it isn’t, it’s the embryonic, the taking of innocent life that the church opposes.”

“It usually takes me 15 minutes to convince people what the distinction and the difference is. …. It works very well, but I wish I had a bigger platform from which to explain it,” he said.

“Confusion is one of the reasons more people have not become involved in supporting more research because they don’t understand the distinction between adult and embryonic stem-cell research,” Flynn told CNS.

Taking on the challenge to explain it “is very important,” he said. “The church does a great job of making that distinction,” said Flynn, and he sees it as his mission to do so in the political arena.

But the biggest stumbling blocks faced by advocates of adult stem-cell research, according to Flynn, are funding and regulatory restrictions. They are the biggest barriers to getting treatment to people like his grandson and others suffering from disease.

“What’s frustrating is that it takes so long for the FDA (Food and Drug Administration) to approve all these different solutions,” Flynn lamented. “You get high hopes about some breakthrough in adult stem-cell treatment, you get some encouraging news and then you’re told you have to wait until it goes through a long approval process.”

He also said there’s not enough funding for this medical research going to the National Institutes of Health, where Braeden, now 8, was finally diagnosed. “(It’s) the world’s renowned medical research institution; they’re very qualified, capable and committed, but they just don’t have the kinds of resources necessary to continue this essential endeavor.”

“There’s no reason why, as the greatest country in the world, we can’t find some kind of help, some kind of solution for children like Braeden.”

Added Flynn, “We’re doing fine on the faith front; where we need help is the funding front.”

According to Christian Drapeau, chief science officer at Stemtech International Inc., another sizable challenge is the reluctance of many in the medical community to simply accept using adult stem cells in treatment, despite their clinically proven success.

“As strange as it may sound, in spite of the great promises of adult stem-cell treatments for various health conditions,” he told CNS, “one of the biggest challenges probably remains the fact that cellular therapy in general is still not widely accepted in the general practice of medicine. Insurance will easily pay for drug treatments even in the absence of significant results, but will not cover cellular therapies.”

In January 2014, scientists from Japan’s RIKEN research institute and Brigham and Women’s Hospital in Boston, an affiliate of Harvard Medical School, were able to reprogram blood cells from newborn mice by placing them in a low-level acidic bath for 30 minutes. Seven to 9 percent of the cells subjected to such stress returned to a state of pluripotency and were able to grow into other types of cells in the body.

“If this technology proves feasible with human cells, which seems likely, it will offer yet another alternative for obtaining highly flexible stem cells without relying on the destructive use of human embryos,” Father Tadeusz Pacholczyk, director of education at the National Catholic Bioethics Center in Philadelphia, said in a CNS interview last year.

“I’ve worked with popes, presidents and prime ministers and been personal friends with two saints, but this is my greatest cause in life: to help children like Braeden.”

Flynn will continue to work “to get people to understand, to educate and inform the public on the severity on the problem” because “this is a social justice issue, which I’m rooted in because of my Catholic faith. This is my life’s cause.”

He’s “hopeful for children like Braeden” and that “with prayer, God, and good science, anything is possible.”