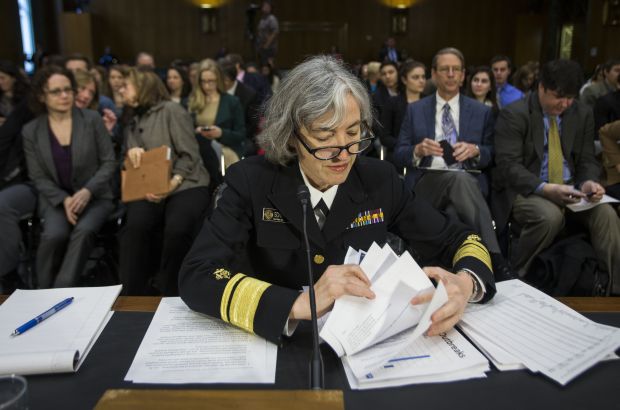 Dr. Anne Schuchat, director of the Centers for Disease Control and Prevention's National Center for Immunization and Respiratory Diseases, prepares to testify at a Senate hearing Feb. 10 in the Dirksen Senate Office Building in Washington. She appeared before the Senate Health, Education, Labor and Pensions Committee to discuss the re-emergence of vaccine-preventable diseases. (CNS photo/Jim Lo Scalzo, EPA)

WASHINGTON (CNS) — The Senate Committee on Health, Education, Labor and Pensions convened Feb. 10 for a hearing on the current crisis of falling immunization rates among children in the United States in the wake of a recent measles outbreak that has, so far, affected 121 people in 17 states and the District of Columbia.

Sen. Lamar Alexander, R-Tennessee, said in his opening statement that what recent outbreaks have truly pointed out is a breakdown in what is called “herd immunity.”

“Infants and individuals who are immunocompromised are traditionally protected by what is called herd immunity,” explained Alexander. “The people around them are vaccinated, so they don’t get sick, and that keeps the babies and others who can’t get vaccinated from getting sick.”

The chairman said that in some areas of Los Angeles, 60 to 70 parents at certain schools have filed a “personal belief exemption” to opt out of having their children immunized on “philosophical grounds.”

“In these elementary schools,” said Alexander, “vaccination rates are as low as those in Chad or South Sudan.”

Speaking before the committee was Dr. Anne Schuchat, director of the National Center for Immunization and Respiratory Diseases at the Centers for Disease Control and Prevention in Atlanta.

“Our nation’s immunization system is strong … but this year’s outbreak of measles shows how interconnected we are,” Schuchat said in her statement, explaining that many of the diseases now thought to be relics of the past are still “only an airplane ride away.”

CDC officials traced the current outbreak of measles that started in Southern California to an unvaccinated woman who was visiting Disneyland when she became ill and contagious Dec. 28.

The Senate hearing’s focus quickly shifted to the science and controversy surrounding the current vaccination debate when Alexander asked Schuchat about the oft-discussed but now-debunked 1998 article that link the measles, mumps and rubella vaccine to autism.

“The information in that particular report was found to be fraudulent by a British investigator,” Schuchat explained to the committee. The study has been “highly discredited,” she said, adding that “vaccines don’t cause autism” and are “highly effective and safe.”

Regardless, misinformation is still a major problem in the current efforts against vaccine-preventable diseases, according to Schuchat.

“Parents who opt out of immunization in these micro-communities don’t often realize that these diseases are still around,” she said, emphasizing the CDC’s efforts to provide families with the best up-to-date “information, sources and facts” about preventable disease.

Sen. Barbara Mikulski, D-Maryland, concurred with Schuchat, saying that “I know that most parents would do anything for their children” and therefore that “mothers and fathers need good information and real science” to care for their families.”

The committee then heard from a second panel composed of Dr. Mark Sawyer, professor of clinical pediatrics at the University of California San Diego; Dr. Tim Jacks, a parent and pediatrician from Southern California; and Dr. Kelly L. Moore, director of the immunization program at the Tennessee Department of Health.

The second panel revisited the importance of the “herd immunity,” which the chairman had mentioned, and corroborated Schuchat’s statement that “our best protection (against disease) is community-level vaccination.”

Sawyer called vaccines “one of the greatest public health achievements” in history, adding that, because of them, he has never seen “a case of polio, tetanus or diphtheria in my 30 years of pediatric medicine.”

“Unfortunately,” Sawyer told the committee, “my residents are going to get a chance to see the measles” because of the decline in immunizations for that in the U.S.

Jacks stressed the importance of community level immunization in his opening statement, which recounted how his 10-month-old son and his daughter Maggie, a leukemia patient, were recently exposed to the measles pathogen while receiving regular treatment in Southern California.

“Antibodies aren’t the best thing” to combat the disease, he said, “but they are the only thing we can do to try to prevent (my children) from contracting measles.”

He also had a message for parents against having their children immunized: He urged them to reconsider. “Herd immunity is the only thing protecting my two children” from vaccine-preventable diseases, he said.

NEXT: Mission of Catholic schools to evangelize, sanctify, says archbishop