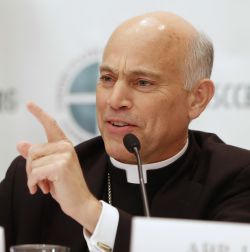 “In the end, our Catholic schools exist to help young people attain holiness in their lives, that is, to become saints,” Archbishop Cordileone said in his talk to an annual convocation of Catholic high school teachers, articulating that the mission of a Catholic school is to evangelize and to sanctify.

He also stressed what he called the foundational virtues of humility and chastity, saying the virtue of humility “grounds us in reality” and combats a prevalent sense of entitlement.

“A humble person approaches God in prayer and asks: ‘Lord, what do you want me to do?'” Archbishop Cordileone said in his address to more than 350 teachers gathered at Sacred Heart Cathedral Preparatory in San Francisco. “This is the question every young person must ask themselves in order to discern their vocation, and it is incumbent to our Catholic schools to assist them in doing so and in finding the answer.”

Chastity is “the constant disposition to love the person as they should be loved which applies equally to married couples as those who are not married,” he said, noting that love is selfless.

Archbishop Cordileone explained why he has added “hot button” Catholic teaching from the Catechism of the Catholic Church to the faculty handbooks of the four archdiocesan high schools for the 2015-16 school year. Those include Catholic teaching on artificial contraception, homosexuality, same-sex marriage, artificial reproduction and abortion.

“The times we live in pose very drastic challenges to us for teaching all of the virtues properly,” he said. “The temptation we all feel is to soft-pedal these issues — better not to go there, or at least don’t insist upon it, less we be judged adversely by others and not ‘fit in.’ But this is a time more than ever that our Catholic schools have to step up to the plate, and be true to what they are called to be — for the good of our young people in this life and in the next.”

The handbook is separate from the teachers’ contract and clarifies that Catholic school teachers, in their professional and public lives, must not contradict Catholic teaching, Archbishop Cordileone said.

During the 45-minute question-and-answer period that followed his talk, Archbishop Cordileone also answered questions about the impact on gay students of including teachings from the catechism in the faculty handbooks as well as recurring fears of teachers that they will be fired for disagreeing with Catholic teaching.

“You are the ones who bring the fullness of church teaching to our youth,” the archbishop said, noting the importance of compassion. “Certainly we do not want our gay youth to be harmed. We are against bullying.”

He said the handbook is for teachers, not a teaching document. He also read the portion of the handbook that states opposition to unjust discrimination and the clause which states: “We accept homosexual persons do not choose their condition and they must be accepted,” and are “called to fulfill God’s will in their lives.”

Asked about what would constitute a firing offense, Archbishop Cordileone noted that his letter to the teachers clearly said there was no desire to dismiss any teacher.

However, he said, some examples that are “pretty extreme” would include serving as an escort at an abortion clinic, handing out contraceptives to students or being a member of a white supremacist group.

Archbishop Cordileone began his talk with the theme of Pope Francis’ “theology of accompaniment” and its application to Catholic school teachers.

“The students in our Catholic schools are at the beginning of their journey of life, and it is your privilege, as their teachers, to accompany them at this critical stage of their life’s journey,” he said.

He also thanked the teachers, saying “I am grateful to you for all you do to illuminate, order, and sanctify the lives of teenagers entrusted to your care.”

The archbishop’s day with the teachers began with 9:30 a.m. Mass at St. Mary’s Cathedral.

After Mass, teachers walked the block from the cathedral to the meeting hall, past a line of Sacred Heart Cathedral students and parents standing on the cathedral plaza and steps and along the street.

The demonstrators held signs opposing the archbishop, many with the “#teach acceptance” hashtag or “Support our teachers,” in a demonstration organized by Sacred Heart Cathedral Facebook and Twitter posts circulated to students and parents at other high schools.

“We have decided to come together to peacefully gather and hold a vigil on behalf of our teachers,” Sacred Heart Cathedral senior Gino Gresh said. “We don’t want to stand down to any injustice or discrimination. All we want to do is to spread respect, love and positivity.”

Students at the four archdiocesan Catholic high schools did not have class Feb. 6, but few students from the other high schools were at the demonstration that day.

Marin Catholic High School theology teacher Greg Joseph said the student and parent protests troubled him — because he felt the protesting students and parents did not understand the fullness of Catholic teaching on the human person.

“There is this distortion of what the truth is,” Joseph told Catholic San Francisco, the archdiocesan newspaper.

“As a teacher I am still free to love my students and there is no limitation on that. To me, I’m walking, I’m seeing all these people protesting. I feel bad because they don’t really understand what we are doing,” said Joseph, who noted he just completed a unit on the human person in his class for seniors. “It is about loving people with the truth. Catholicism is truth and love.”

NEXT: Pittsburgh bishop: Church is not free ‘to practice what we preach’