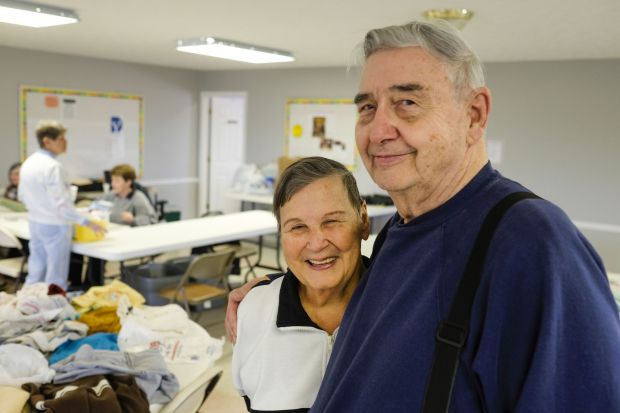 June and Matt Keller pose for a photo in Sparta, Tenn., Feb. 5. The couple moved to Tennessee from Florida 10 years ago and started a ministry at St. Andrew Church similar to one they started at their former parish in Florida. (CNS photo/ Rick Musacchio, Tennessee Register)

SPARTA, Tenn. (CNS) — Matt and June Keller know how tough it can be to make ends meet. During their 62 years of marriage, they raised seven kids and faced the challenges of running a household.

When they were living in Michigan years ago, Matt was working for the telephone company as a lineman, June said. “We were not making very much money. Matt had one dollar left in his pocket, and he put it in the church envelope. Would you believe, that weekend, there was a big storm … and he got all kinds of overtime.”

They experienced other obstacles that regularly put a strain on their finances, June told the Tennessee Register, newspaper of the Nashville Diocese. “Our stove went out, or our refrigerator went out. Oh, no, what do we do? And back then, there was no help like this. This is why we do the program.”

The program is what the parishioners at St. Andrew Church in Sparta simply call Outreach. From 10 a.m. to noon every Thursday, a regular group of volunteers led by the Kellers meets in the parish hall to hand out food and clothing to needy families from White and Van Buren counties. Families also can get help paying their utility bills.

But sometimes the best assistance the volunteers can provide is taking time to listen to people’s troubles and then offering them emotional support.

“One of the things that Matt told me early on was his main job was to give hugs,” said Father Steve Wolf, the temporary administrator of St. Andrew Church.

The Kellers’ determination to help people deal with the emotional stress of life’s problems was inspired by their own experiences. They lost a 16-year-old son to a sudden heart attack, and the experience of dealing with loss and grief had a major impact on the couple. They ultimately took classes in grief counseling and learned how to reach out to people suffering through difficult times.

“We get tears here sometimes. We have to pull people aside and tell them don’t be ashamed to come in for help,” June said. “We are here to help.”

The Kellers brought Outreach to Sparta when they moved from Florida to be closer to some of their children.

Eighteen years ago, they had moved from Michigan to Florida. As parishioners at St. Mary Church in Rockledge, they worked with the local Catholic Charities office and operated a parish-based support program for eight years.

June, who had worked her way up from a switchboard operator to personnel manager to a buyer at a J.C. Penney store in Florida, used her management skills to help organize the program. “I’ve always been very organized,” June said, “and that really helps keep up with the records necessary to operate the program.”

When they moved to Sparta 10 years ago, the Kellers met with Salvatorian Father Fred Schmit, who was the longtime pastor of the parish. With his support, St. Andrew adopted the program.

“This is a small parish,” said Father Wolf, with only about 147 members. “One of the things that I’ve discovered is that everybody takes responsibility for everything. People talked about this program with a real sense of pride, and I was impressed as they were describing it to me with how simple it is. The people of the parish get excited about it. They want to support it.”

The program is funded entirely through donations from parishioners.

Every month there is a collection for the program, and when there is a special need for clothing or household items, a bulletin notice typically brings in items for distribution.

“Sometimes the bank account gets kind of low, and a check will come in for $1,000,” June said. “Sometimes someone would be visiting the parish and leave an envelope that says they are very impressed with what we are doing here and put in a $1,000 check. It happens all of the time.”

In January “the program served 100 clients,” June said. A client can be a household of one to eight people. Every 30 days, a household receives a food box, and once a year, they can receive assistance with utility bills.

The volunteers can refer people to other agencies for more help if it’s needed. Also, other churches in the Sparta area have seen the impact of the Outreach program and have coordinated efforts to host their own programs. June said that 10 other churches have set up similar programs in an effort to meet the needs in the area.

June is 80 and Matt is 82, but they have no plans to give up their work to help others in need. “This program is part of our life,” June said.

“I’ve had seven surgeries in six years,” she added, “but I’m still here. I can’t walk away from the program. My daughter said, ‘Mom, if you retire, you will die.’ There is so much of me in this work.”

Musacchio is editor-in-chief of the Tennessee Register, newspaper of the Diocese of Nashville.