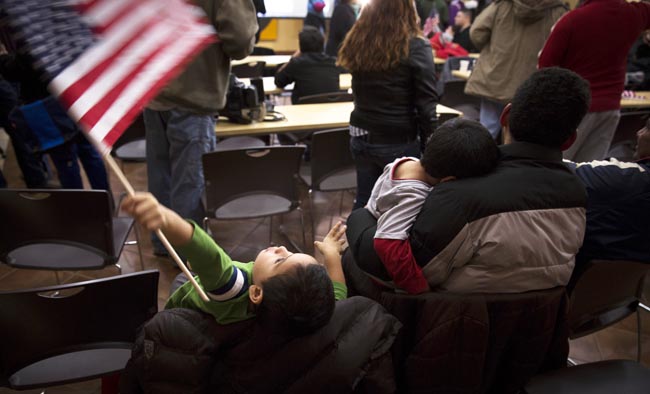 WASHINGTON (CNS) — A little more than one day before an expansion was to take effect in a deferred deportation program known as DACA, a federal judge in Texas issued a preliminary injunction blocking the Obama administration’s effort.

In a 123-page memorandum released by Texas Gov. Greg Abbott late in the evening Feb. 16, District Court Judge Andrew Hanen granted the request of Texas and 25 other states to temporarily block a planned expansion of Deferred Action for Childhood Arrivals to certain people who were ineligible for the original 2012 program.

The expansion of DACA was to be rolled out Feb. 18, but Jeh Johnson, secretary of Homeland Security, said Feb 17 that the implementation would be delayed while the administration appeals.

Meanwhile, organizations that have been helping people prepare to apply for the programs said they would continue that work, in anticipation of what they hope will be a reversal of the injunction. Rallies previously planned for the same week in dozens of cities to bring attention to the new programs were going on as scheduled. In some cases they picked up a new focus of protest against Hanen’s ruling.

Johnson and legal experts who support the administrative actions said they were confident that Hanen’s order would be reversed on appeal and that the programs are on sound legal footing, within the government’s exercise of prosecutorial discretion.

A second variation of DACA, Deferred Action for Parents of Americans and Lawful Permanent Residents, called DAPA, was to take effect in the spring but it also will be suspended until further notice, Johnson’s statement said.

Hanen’s order did not address the legality of the program but focused on a government procedure and whether the administration needed to follow its requirements for how to promulgate a “rule change.” The judge’s order affects the two new programs nationwide.

The existing DACA program is unaffected, Hanen said. It allows certain people who were brought to the United States as children to apply for deferral of deportation. In return for registering with the government, undergoing a background check, showing they are in school or completed a high school education, and paying a fee, approved applicants receive a work permit, a Social Security number and the opportunity to obtain drivers’ licenses.

Also unaffected by the judge’s order are other aspects of President Barack Obama’s November orders, related to the administration’s priorities for enforcement of immigration laws.

Catholic legal assistance agencies around the country — many working through parishes and neighborhood organizations — have been gearing up to help immigrants apply for the programs since they were announced by Obama shortly after the November elections.

“The unfortunate decision by the Texas … court has the effect of confusing, frightening, and discouraging eligible immigrants from applying,” said Jeanne M. Atkinson, executive director of CLINIC, the Catholic Legal Immigration Network. CLINIC has been training people to advise potential applicants and help them prepare applications.

“We believe this is a temporary setback and look forward to the decision of the appellate court,” Atkinson said in a statement. “In the meantime we are moving forward undeterred with plans to implement the administration’s immigration action, which will give millions of people the chance to live, work and stay in America with their families.”

Mercy Sister Patricia McDermott, president of the Institute of the Sisters of Mercy of the Americas, said in a statement that “without this executive action, 150,000 children annually would continue to lose a parent to deportation.”

She said deportations not only harm the person who is removed but that “it destroys the people they leave behind, many of whom are innocent children.”

“We know these people as our neighbors, as our friends and as our brothers and sisters in Christ,” she said.

In a Feb. 17 teleconference, several attorneys who wrote an “amicus” or friend-of-the-court brief opposing the states’ effort to block the programs said they remain confident that the administration’s orders will withstand the legal challenge.

“Our recommendation is don’t panic,” said Debbie Smith, associate general counsel for the Service Employees International Union. “Keep preparing your documentation. Think of this as a timeout, a bump in the road, it’s not the end of the game. Justice will prevail.”

She said she expects the suspension of the programs is temporary and urged people who might want to apply for any of the deportation deferral programs to “stay tuned in. This is just the beginning of the fight.”

In another teleconference, White House Domestic Policy Director Cecilia Munoz observed that Hanen’s order blocking the programs “was not a constitutional decision,” and that it “wouldn’t be the first time such a ruling was overturned.”

Richard Trumka, president of the AFL-CIO, said in a statement that his organization “will continue educating workers, training union activists and helping eligible applicants gather the documents they will need to qualify.”

He said the lawsuit “represents a misguided effort to use a false economic basis to block the immigration relief that millions of hardworking, longtime members of our community deserve.”

Steven Choi, executive director of the New York Immigration Coalition, said the lawsuit is politically motivated, but only a temporary setback.

“Judge Hanen’s misguided ruling will only temporarily delay the implementation of these relief programs,” he said in a statement. “We will not let this politically motivated lawsuit — nor legislative attacks — to get in the way of the years of hard work from affected immigrants, advocates, elected officials and allies. Our communities will continue to prepare the more than 300,000 New Yorkers to prepare for DACA and DAPA in 2015.”

PREVIOUS: Pittsburgh bishop: Church is not free ‘to practice what we preach’

NEXT: Preaching must be engaging to be effective, archbishop says at congress