Preaching must be engaging to be effective, archbishop says at congress 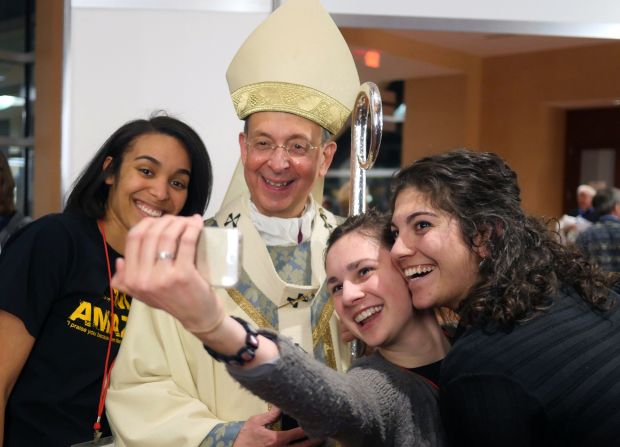 BALTIMORE (CNS) — Soon after Sherry Weddell’s new book, “Forming Intentional Disciples: The Path to Knowing and Following Jesus,” was published, she was approached by a man who told her that until he had read her book, he didn’t know it was possible to have a personal relationship with God.

“This man was in ministry, forming clergy,” Weddell told an audience of about 1,200, gathered in Baltimore on the final day of the Feb. 12-14 Mid-Atlantic Congress for Catholic Leaders.

The recounting of the incident drew gasps from the crowd.

Weddell — co-director of the Catherine of Siena Institute, a program dedicated to equipping parishes for the formation of lay Catholics for their mission to the world — said the man told her a personal relationship with God was something that was just never talked about.

“That is the issue,” she said, “breaking that culture of silence.”

The congress, co-sponsored by the Archdiocese of Baltimore and the Association of Catholic Publishers, in partnership with the National Leadership Roundtable for Church Management, was designed to deepen the zeal of church leaders at the parish and diocesan level while also expanding their knowledge.

A focus on the new evangelization was a key theme throughout the gathering, with Baltimore Archbishop William E. Lori noting in a Feb. 13 homily that if its goal is to gather people from every language and nation to be a “house of prayer for all peoples,” then preaching, formation and religious instruction must attract.

Archbishop Lori noted that preaching should draw people not to a set of rules, “but to a wholly new way of life that can only be lived in communion with Christ, a communion that is achieved in and through the sacraments, most especially the Eucharist.”

Church leaders offer formation and religious instruction not as requirements, he said, but “as those who seek to know, love and follow the Lord.”

Congress participants heard from more than 80 speakers on a wide range of topics covering everything from church management to Bible study, liturgy and the sacraments.

Weddell cited a Canadian study examining why young adults raised in Christian traditions, including Catholicism, remained in or left their faith.

Those who stayed, the study found, “had an experience of God or answered prayer; they were able to ask questions openly and discuss spiritual questions; they understood the Gospel; and they had older adults living as ‘disciples’ around them, modeling faith.”

“We can’t depend on inherited religious identity,” Weddell said. The audience laughed as she noted that church leaders tend to separate everyone into two tracks: “the saint track and the rest of us, who were normal.” That didn’t allow for someone who has begun the journey to discipleship.

Part of the problem, she noted, is that “we never created a safe space for (young people) to wrestle with saying a deliberate ‘yes.'” “We presume the yes,” she continued, believing it occurred in religious education classes or youth group, or in learning catechism as children.

She advised church leaders ask people to tell their stories about their relationship with God.

In a Feb. 13 talk about trends affecting the Catholic Church, Matthew Pinto, founder of Ascension Press, said he sees a noticeable movement toward “intentional discipleship.”

He speculated that the leadership of Pope Francis will cause “progressive” Catholics to have a greater deference to the papacy in the years to come, while it simultaneously challenges “orthodox” Catholics to “come out of their comfort zones” in serving those in need.

“I think in decades to come, we are going to see doctrinal orthodoxy with a social justice emphasis,” Pinto said.

Other trends Pinto said the church must be aware of include the rising acceptance of homosexuality, shifting demographics, the emergence of new groups of laypeople ready to serve the church, increasing challenges to religious freedom and the growth of the new evangelization as promoted by the last three popes.

Damon Owens, executive director of the Theology of the Body Institute, emphasized in a Feb. 13 presentation that in helping people live by God’s law, church ministers must encourage a personal encounter with Christ.

“The cold objective law is received by the heart as a rebuke until it becomes personal,” he said.

Likening God’s laws to guardrails that keep people safe, Owens said it isn’t enough to “stay on the right side of the road.”

“Merely following the law is not a joy-filled life,” he said. “It’s about an encounter of the heart. Then we can see the law not as the restrictive restraint, but as protective guidance.”

During the Feb. 13 liturgy, Massgoers were greeted by smiling members of Camp GLOW, an archdiocesan summer program for people with developmental disabilities. Shrines to Our Lady of Guadalupe, Our Lady Seat of Wisdom and others were set up in a converted ballroom, each bathed in blue spotlights and flickering candlelight.

Congress participants, who hailed from across the East Coast and beyond, perused books and other resource material set up in a large exhibition hall. There were also opportunities for eucharistic adoration and the sacrament of reconciliation.

Helen Harris, a cantor, catechist, lector and extraordinary minister of holy Communion at St. Joseph in Martinsburg, West Virginia, said she attended the congress for the first time to learn more about her faith and ministry.

“I want to know what canon law expects of us when we are passing that faith to catechumens coming through (the) RCIA process,” she told The Catholic Review, Baltimore’s archdiocesan newspaper. “It’s important to learn how to do that in the way the church wants us to do it. It is important to pass on the faith not only to people around us, but we have to continue to grow in our own faith.”

Other general session keynote addresses were presented by Bishop Richard J. Malone of Buffalo, New York; Paulist Father Ricky Manalo, an expert on liturgical music; and Brian K. Johnson, director of the Office of Adolescent Catechesis and Evangelization in the Archdiocese of Galveston-Houston.

Matysek is assistant managing editor of The Catholic Review, newspaper of the Baltimore Archdiocese. Menefee Jackson is a contributor to the paper.

NEXT: Payday lending a top obstacle to financial independence for the poor