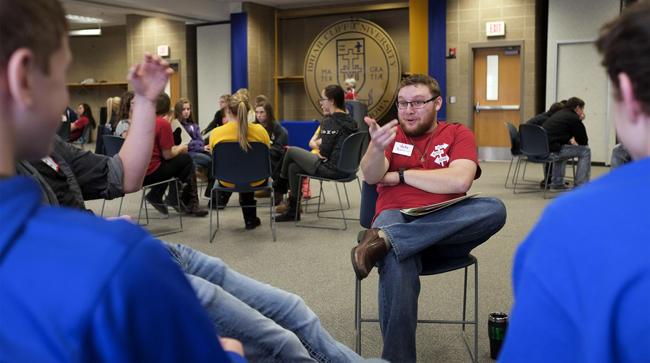 Briar Cliff University senior Jacob Rosenmeyer reacts to a comment from one of the members of his small group during a Feb. 8 confirmation retreat for area students at the Sioux City, Iowa, campus of the Catholic college. (CNS photo/Jerry L. Mennenga, Catholic Globe)

“I do not believe that offering free college to everyone, regardless of financial position, is in the best interest of higher education or our country,” she said.

Obama’s plan, revealed in a series of speeches in January — including the State of the Union address — would offer two years of free community, or technical college, to students who go at least half-time, maintain a 2.6 grade point average and make progress toward a degree. The idea is to make higher education accessible to all — at an estimated cost of $60 billion over a decade.

Wharton said she supports making higher education affordable and accessible for those who want to pursue degrees. In addition to Catholic-run Briar Cliff, Sioux City also is the site for Western Iowa Tech Community College and Morningside College, a private, four-year college affiliated with the United Methodist Church. However, Wharton questioned the proposal’s outcomes.

“In reality, it offers little additional support to Pell Grant families,” she said. “Many of these families already have tuition fully covered at community colleges; therefore, the bigger question should be if this is the best official utilization of resources for our country.”

In fact, Wharton speculated the plan might cause an “adverse effect” on enrollment for traditional institutions, such as Briar Cliff — a four-year university operated under the auspices of the Sisters of St. Francis of Dubuque.

“Federal and state officials need to understand the ripple effect that legislation could cause,” she told The Catholic Globe, newspaper of the Sioux City Diocese.

According to the Iowa Association of Independent Colleges and Universities, Iowa’s independent, nonprofit colleges account for more than 10,000 jobs and $1.8 billion in annual economic impact.

“Those figures are not even taking into account the employment and economic impact of state schools, which are also traditionally known as four-year institutions,” Wharton said.

Obama has stated “free” community college would made higher education as accessible as a high school diploma. However, Wharton countered that most institutions already provide substantial assistance to students.

For example, Briar Cliff supports the federal Pell Grant along with the Iowa Tuition Grant, and “100 percent of our full-time, undergraduate students receive some form of financial aid,” she said. With a mix of scholarships, grants and loans, Briar Cliff creates financial aid packages that cover more than 85 percent of tuition and fees for the average student.

However, institutions of higher learning still have costs, and Wharton said the two-year community college free ride might force four-year colleges and universities into lowering tuition, reducing faculty and/or staff and re-evaluating majors.

“It’s really too soon to speculate on exact implications,” she said, but added that impacts on enrollment has to be considered. “Briar Cliff will employ strategies to remain agile; however, it (the proposal) could potentially change the landscape of how education is delivered.

Wharton cited Pope Francis who has said the work of the church is to serve the poor and Briar Cliff does that in two ways.

“First, we reach out to assist students who may be first in family to go to college or Mom and Dad lost their jobs or they just have significant financial need,” she said. “Second, all students are involved in service. Much of that service involves the poor, underserved or those who are on the margins.”

Even if Obama’s free community college is implemented, according to Wharton, Briar Cliff would continue helping students see value in an education at a Catholic institution of higher learning.

“We would be using the same strategies to encourage students to choose Briar Cliff,” she said. “These are the strategies that are keeping us relevant in the face of higher education’s unsettling circumstances.”

To graduate, Briar Cliff students must fulfill a religious general education requirement. Associate theology professor Linda Harrington has taught the full range of religion classes since joining the faculty in 2000. She has seen the full spectrum of students — from those engaged in their faith to those who are hostile to religion.

“Whatever their background, many of our students are at a point in their lives when they are questioning and challenging what they have been told by parents and church leaders,” she said. “So, it is a challenge to present Christianity, in general, and Catholicism, in particular, in the basic courses that satisfy the religion general education requirement.”

However, Harrington said the theology courses are not catechesis or evangelization, because they are “giving students, whether Catholic or not, a solid knowledge base from which they can reflect on their own experience of God in the events of their lives.”

“At the same time I make it clear that I am ‘doing theology,’ speaking from the perspective of faith in Christ, and particularly from the perspective of Roman Catholicism,” said Harrington. “I am open about my own faith journey and religious practices, and I never turn away questions students might pose as irrelevant or impertinent.”

The idea of earning a degree with no debt associated with it sounds attractive, but getting an affordable, faith-based education at Briarcliff is far more important to student Jacob Rosenmeyer, 22, who is majoring theology, history and secondary education. He will receive his diploma in May.

“It’s been great being part of a community of faith with people my own age,” he said. “Every grade level, the faculty and the staff have been ‘there’ for each other. I don’t know if you would find that in a public school.”

Added Rosenmeyer, “I received a good scholarship package to attend, but if you think you cannot afford to attend, I believe the university will find a way for you to achieve that goal, as it did for me.”

Wharton said Briar Cliff University — as a Catholic, Franciscan university — provides an experience that forms students in an environment that cannot be replicated at a community college.

“Briar Cliff emphasizes quality education for its students, combining a broad, liberal arts, intellectual background with career development,” she said. “The university challenges its members to grow in self-awareness and in their relationships to others and to God.”

NEXT: Texas bishop frames theological call to be ‘with the immigrant’