College of Cardinals to be briefed on progress of Curia Reform 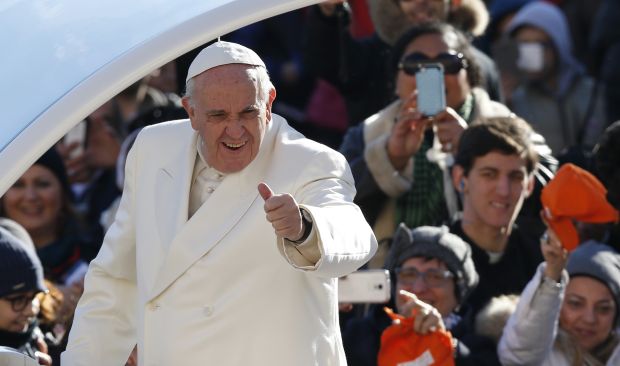 Pope Francis gives a thumbs up as he arrives to lead his general audience in St. Peter's Square at the Vatican Feb. 11. (CNS photo/Paul Haring)

VATICAN CITY (CNS) — High-level discussions continue on how exactly to reform the Roman Curia, but the idea of consolidating several offices into two large groups — one with family, laity and life, and the other with justice and peace, migrants and charity — seems to be taking form, the Vatican spokesman said.

Briefing reporters Feb. 11, the third day of meetings of Pope Francis’ international Council of Cardinals, Jesuit Father Federico Lombardi, Vatican spokesman, insisted “there is not and has never been” a draft document of a constitution providing a new list of all Curia offices and their responsibilities.

“It does not seem to me that there are many other concrete ideas” that are ready for discussion by the entire College of Cardinals, Father Lombardi said.

Part of the Council of Cardinals’ meeting Feb. 9-11 was dedicated to preparing summaries of the nine-member council’s work to present to the entire College of Cardinals, whom Pope Francis called to the Vatican Feb. 12-13 to discuss the reform, he said.

Australian Cardinal George Pell, secretary for the economy, was scheduled to brief all the cardinals on the work of his office and on the ongoing process of preparing the formal statutes of the related Council for the Economy. In addition, Boston Cardinal Sean P. O’Malley, president of the Pontifical Commission for the Protection of Minors, was to explain the commission’s work to the College of Cardinals.

Father Lombardi said he had no indication that the Council of Cardinals formally discussed an article by Cardinal Gerhard Muller, prefect of the Congregation for the Doctrine of the Faith, on “theological criteria for a reform of the church and the Roman Curia.” The article was published in the Feb. 8 edition of L’Osservatore Romano, the Vatican newspaper.

“The Curia is not merely an administrative structure,” Cardinal Muller wrote, but is “essentially a spiritual institution rooted in the specific mission of the church of Rome, sanctified by the martyrdom of the apostles Peter and Paul.”

The Roman Curia advises the pope and helps him carry out his mission as head of the universal church, Cardinal Muller wrote. “The Synod of Bishops, bishops’ conferences and the varied groupings of particular churches belong to a different theological category than the Roman Curia does.”

Bishop Marcello Semeraro of Albano, Italy, secretary of the Council of Cardinals, said the reform of the Roman Curia aims to ensure that church structures are not focused on self-perpetuation, but on assisting the pope and the entire church to proclaim the Gospel and God’s love.

“The process of reforming the Roman Curia is in line with that ‘poor church’ that the pope has spoken about since the beginning of his ministry,” Bishop Semeraro told SIR, the news agency of the Italian bishops’ conference.

Bishop Semeraro said he did not know how much longer it would take to enact the reforms. However, Father Lombardi announced that the Council of Cardinals would meet again April 13-15.

NEXT: Pope calls for solidarity with migrants after deadly sea crossing