During shroud display, Turin reaches out to women who have aborted 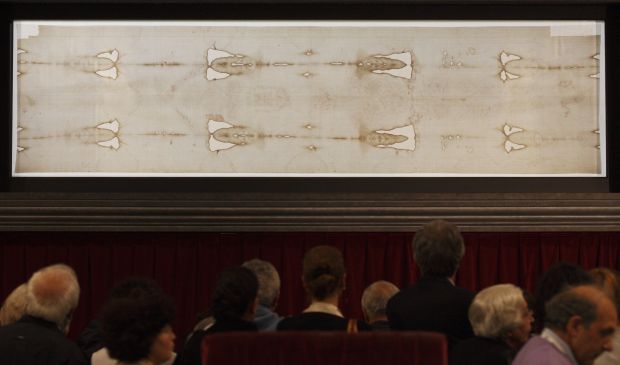 People view the Shroud of Turin on display at the Cathedral of St. John the Baptist in Turin, Italy, in this April 26, 2010, file photo. The shroud will be on public display in the cathedral April 19-June 24, 2015. (CNS photo/Paul Haring)

ROME (CNS) — With the aim of ensuring that the public display of the Shroud of Turin promotes conversion and healing, the archbishop of Turin has given priests throughout the archdiocese special faculties to offer absolution to women who confess to having had an abortion.

The display of the shroud April 19-June 24 should be “a time of grace that translates into attitudes of conversion, the fruit of repentance and newness of life,” Archbishop Cesare Nosiglia wrote in a decree signed Feb. 18, Ash Wednesday.

According to the Code of Canon Law, “A person who procures a completed abortion” automatically incurs excommunication. Only the bishop or a priest he designates can lift the excommunication. In some dioceses the local bishop formally has granted the faculty to all priests, while in Turin and other places, the bishop grants the faculty on special occasions.

Archbishop Nosiglia wrote that the church’s ministers, meeting the hundreds of thousands of pilgrims expected to visit the Turin cathedral to see the shroud, want to “concretely demonstrate the Father’s mercy toward those who repent of an evil committed.”

However, he said, the permission granted to priests is limited to the time of the shroud’s public display so as not to “diminish the rigor of the law,” which aims to teach people how seriously wrong it is to kill an innocent life.

The archbishop asked Turin priests to re-read St. John Paul II’s encyclical letter, “The Gospel of Life,” especially the sections numbered 58-63, which discuss the seriousness of taking the life of the most innocent human being imaginable, the way deciding to have an abortion is usually “tragic and painful” for the woman and explaining that the automatic excommunication applies also to anyone who helped a woman procure an abortion.

The penalty, St. John Paul wrote, “makes clear that abortion is a most serious and dangerous crime, thereby encouraging those who commit it to seek without delay the path of conversion. In the church the purpose of the penalty of excommunication is to make an individual fully aware of the gravity of a certain sin and then to foster genuine conversion and repentance.”

Turin priests hearing the confessions of someone who has had or helped someone to have an abortion must remember that in the confessional they are “simultaneously ministers of divine justice and divine mercy,” the archbishop wrote. “Above all, they must know how to console the anguished remembering that ‘whatever our hearts condemn, God is greater than our hearts and knows everything,'” as 1 John 3:20 says.

Archbishop Nosiglia also asked priests to impose a penance that would help lead to a lasting conversion, first of all by making a commitment to “implore God’s indispensable help” by regular prayer, particularly attendance at daily Mass for a specific period of time, if at all possible. Penitents also can be asked to support, financially or through the gift of their time, programs that assist women with crisis pregnancies and other pro-life causes.