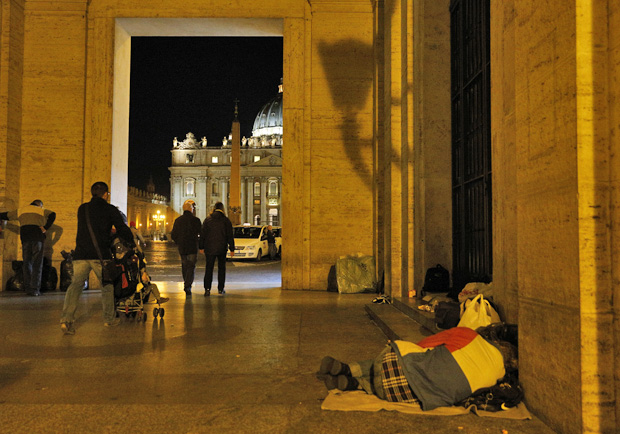 A homeless person sleeps outside the Vatican press office near St. Peter's Square in this file photo from Nov. 13, 2014. Dozens of homeless people live within sight of the Vatican. (CNS photo/Paul Haring)

VATICAN CITY (CNS) — A homeless man who faithfully attended Mass at a church inside Vatican City for decades was buried in a Vatican cemetery after it was discovered he had died and was left unidentified in a hospital morgue.

Willy Herteleer was well-known by the Swiss Guards keeping watch at St. Anne’s Gate, by local business owners and a number of clergy who brought him food, took him to lunch or treated him to his morning cappuccino, according to news reports.

“He attended 7 o’clock Mass every day for more than 25 years,” Father Bruno Silvestrini, the pastor of the Vatican’s Church of St. Anne, told Vatican Radio.

Though Herteleer lived on the streets with all of his belongings packed in a folding grocery cart, “he was a rich person of great faith,” the priest said.

“He was very, very open and had made many friends,” Father Silvestrini said. “He spoke a lot with young people, he spoke to them of the Lord, he spoke about the pope, he would invite them to the celebration of the Eucharist,” which Herteleer always said was “his medicine.”

Msgr. Americo Ciani, a canon at St. Peter’s Basilica was another friend of Herteleer, and he told Vatican Radio that the elderly man — thought to be about 80 — would lean against a lamppost along the road that led tourists and city residents to and from St. Peter’s Square and talk to them about their faith.

“Very often he would engage with someone, asking, ‘Do you go to confession every now and then? Look, going to confession is necessary because if you don’t, you won’t go to heaven!'” the monsignor recalled.

He was such a regular at St. Anne’s that Father Silvestrini paid homage to Herteleer by including a figurine of a homeless man among the shepherds in the church’s annual Nativity scene.

Those who looked after Herteleer became worried when he seemed to have vanished in mid-December, reported the Italian daily, Il Messaggero, Feb. 25.

It turned out Herteleer had collapsed one cold December night and was brought to a nearby hospital after passersby saw he needed help and called an ambulance. He died at the hospital Dec. 12, but his body had remained unidentified and unclaimed at the hospital morgue until friends tracked him down, the newspaper reported.

Msgr. Ciani led the funeral Mass together with the canons of St. Peter’s Basilica in the chapel of the Vatican’s Teutonic cemetery Jan. 9.

Permission was granted to have Herteleer, who was Flemish and Catholic, buried in the small Germanic cemetery where Swiss, German and Flemish nobility and church benefactors had been laid to rest. The cemetery was founded 1,200 years ago for German pilgrims who died in Rome.

In his homily, Msgr. Ciani said he thanked God for letting them get to know Herteleer, “a man who appeared to be alone, but who never felt alone because God’s grace was present in him.”

The casket was adorned with floral wreaths and two portraits of Herteleer — one a watercolor, the other a pastel — that the Italian monsignor had made of him.

Msgr. Ciani said giving Herteleer his final resting place in the Vatican cemetery was “in perfect harmony with Pope Francis’ incisive messages in which he always talks about the excluded, those who do not count in our society … but instead are held dear by, not just the pope, but by the Lord Jesus, who always loved and preferred the poorest.”

Msgr. Giuseppe Antonio Scotti, adjunct secretary of the Pontifical Council for Social Communications, told reporters Feb. 26 that the huge amount of media attention surrounding the man’s burial at the Vatican was further proof of the “throwaway culture” and the inverted values Pope Francis often speaks about.

“The death of an elderly man on the streets made the news, not because he died, but only because he was buried in the Vatican,” he said. “The burial was more important than the death of the man.”

NEXT: During shroud display, Turin reaches out to women who have aborted