‘God has saved me,’ says Indian Jesuit after release from Afghanistan 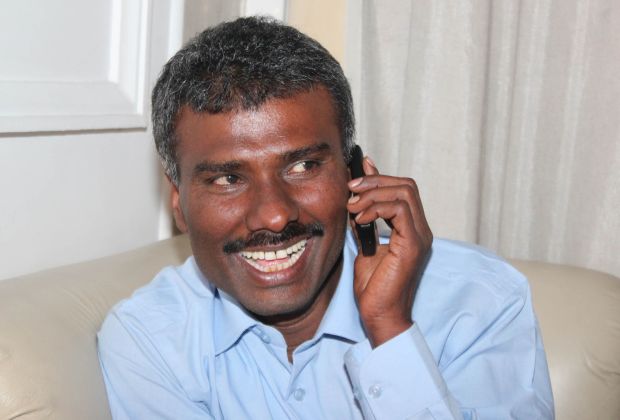 Jesuit Father Alexis Prem Kumar, who was kidnapped in Afghanistan and was held for more than eight months, speaks on a cell phone on his arrival in New Delhi Feb. 22. (CNS photo/Anto Akkara)

NEW DELHI (CNS) — A Jesuit priest kidnapped in Afghanistan and held for eight months told reporters “God has saved me,” but he said he did not want to discuss details of his captivity.

Jesuit Father Alexis Prem Kumar, 47, kidnapped June 2 in Afghanistan’s Herat province, was flown to New Delhi from Kabul Feb. 22 with the intervention of the Indian government.

“First of all, I thank God almighty. I thought I would never be safe. God has saved me,” Father Kumar told Catholic News Service in an interview at the Ashoka Hotel, where he met with family and friends.

He thanked everyone for their prayers: “the Vatican, the Jesuits, the (Jesuit Refugee Service) and all. God has heard our prayers.”

Father Kumar said when Prime Minister Narendra Modi spoke to him: “I felt that the whole of India was welcoming me. I am grateful and thankful to the Jesuits and all others who have worked for my release.”

When media asked the priest to speak about his captivity, he replied, “I want to forget everything for some time.”

“Anything about Afghanistan or what happened, I am not ready to share now. Please pardon me,” Father Kumar told reporters when the question was repeated.

“I have plenty of stories, but I feel it is not the right time to share all those about the time (in captivity),” he reiterated.

The Catholic Bishops’ Conference of India welcomed Father Kumar’s release and thanked Modi “for the efforts taken by him personally and for the many steps adopted by the various agencies of the government of India to secure the safe release of Father Alexis Prem.”

Modi tweeted as Father Kumar was being flown to New Delhi: “Delighted at securing the release of Indian Jesuit priest Father Alexis Prem Kumar from captivity in Afghanistan.”

Earlier, Modi called the priest’s family members in Chennai and broke the news of his release.

“I could not believe when the prime minister told me that Father Alexis has been released and that he is coming,” said Sister Elizabeth Rani of the Congregation of Foyer de Charite, elder sister of Father Kumar.

Father George Pattery, Jesuit South Asia provincial, was chairing a meeting of Indian Jesuit provincials in Mumbai. He told CNS: “We could not believe the news as there were no hints about it. We are relieved as we were getting more and more worried.”

Father Kumar had been based in Afghanistan since 2011 and headed the Jesuit Refugee Service there since 2012.

“I am fine. I ready to go back or go anywhere,” Father Kumar was heard telling Father Pattery by phone on his arrival at the hotel room before meeting the media.

“It was hard,” replied Father Kumar when a fellow Jesuit asked him if he ate properly during captivity.

“Let’s forget all that. Let’s rejoice now,” he said.