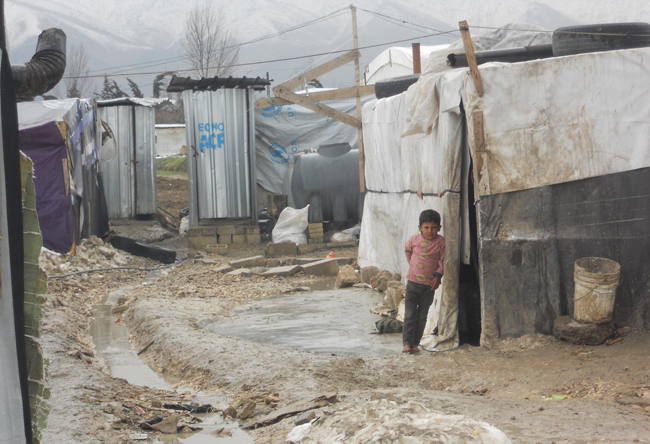 A Syrian child stands barefoot outside a tent Feb. 17 at a camp in Lebanon's Bekaa Valley. This winter's heavy rains have caused the paths between the tents at the settlements to fill with water. (CNS photo/Brooke Anderson)

BEKAA VALLEY, Lebanon (CNS) — Many Lebanese have spent as much time as possible indoors this winter, protecting themselves from this year’s unusually brutal cold season.

But for the approximately half a million Syrian refugees in Lebanon’s Bekaa Valley, their makeshift housing — often flimsy tents or abandoned unfinished buildings — has hardly given them sufficient shelter from the continuous storms that have been pounding the mountains since last fall.

“The hardest part is being cold and not being able to leave the tent. Where would I go?” asked Safia Hassan Hussein, a Syrian refugee from Aleppo who shares a tent with seven family members in the town of Bar Elias. Their informal tented settlement, called Moussa Jassem, is one of about 600 in the Bekaa Valley. These settlements often have 200 tents, each housing anywhere from five to 15 people.

The Hussein family insisted on serving hot tea, which they drink all day long to keep warm, showing the occasional visitor that they have not lost their sense of hospitality.

Lebanon’s heavy wind and rain began in October with only a few days of respite between almost back-to-back storms. Since then, Lebanon has seen around four times as much precipitation as the same period last year. This comes amid aid funding shortfalls for the refugees of the four-year-old conflict. The weather, along with the substandard living conditions, has exposed the refugees to illness, such as pneumonia.

Surviving the elements has become a full-time job for the refugees, whether they’re keeping warm by huddling in front of a small gas heater, fetching drinking water, cleaning clothes or gathering food. They are forced to choose between staying inside the tent and enduring the stench of gas and burning garbage or stepping outside into the cold air and onto a muddy path of open sewage.

This past winter, the temperatures in the Bekaa have ranged from just below to just above freezing. At times the wind has been at 60 miles per hour, in many cases damaging property, with tents and dilapidated houses particularly vulnerable.

On the outskirts of Zahle, Shiraz Mutanos Makhoul was fairing a bit better than her fellow refugees in tents. Ten months ago, she, her husband and newborn fled from Homs, Syria, with little more than the clothes on their backs. Now the family lives in an old abandoned house, but the home’s humidity and smoky heating system prevent her daughter from recovering from her runny nose.

“This is my first winter in Lebanon. It’s much colder than in Syria,” she said. She held her baby close to the heater to keep warm, then pulled her away when she started coughing from the smell. “She’s had a runny rose for a week, and I can’t take her to the doctor.”

Makhoul was an engineer in Syria; now she spends her days at home taking care of her baby while her husband, who owned a shop in Homs, goes out and looks for any work he can find, a task made all the more difficult with the severe winter hindering the agricultural sector, the area’s main employer.

“This has been the toughest winter for Syrian refugees,” said Wissam Tannous, Caritas Lebanon’s coordinator for the Bekaa Valley, as he drove up the main road from Beirut to the country’s eastern mountains between storms.

Tannous makes the trip every day, even in thick fog. One day in mid-February, as he crossed Dahr al-Baydar, the gateway to the Bekaa Valley that sometimes faces road closures during severe weather, he and a passenger saw a vast view of the snowy mountains with ominous dark cloud lurking above. The area has had many snowfalls, with still more to come.

Caritas Lebanon is currently providing aid to more than 56,000 Syrian refugee families across Lebanon. This year it has shifted from material to cash donations for the refugees, allowing for easier logistics for the agency and greater choice for the refugees.

Caritas continues to provide the elderly and the disabled, who have less access to the markets, with supplies such as food and blankets. Its partner agencies in places like the U.S., Canada, Britain, Ireland and Australia support the efforts.

This assistance has become all the more crucial as donations for the Syrian refugee crisis have significantly decreased over the last year, even if the needs have increased. The U.N. World Food Program aid has dropped from $30 per family member per month to $19. Aid agencies cite donor fatigue as a reason for a drop in funding, as Syria is no longer a new story.

For the refugees, more help is essential for survival until they can safely return home, but for many donors, the situation has dragged on far too long to be considered urgent.

“After four years, there’s donor fatigue. After four years, it’s no longer an emergency,” said Isabelle Saade Feghali, deputy manager and coordinator at Caritas. “People need to be sensitized, because the needs are still there.”

PREVIOUS: ‘God has saved me,’ says Indian Jesuit after release from Afghanistan

NEXT: Up to 100 Christians abducted in Islamic State offensive in Syria