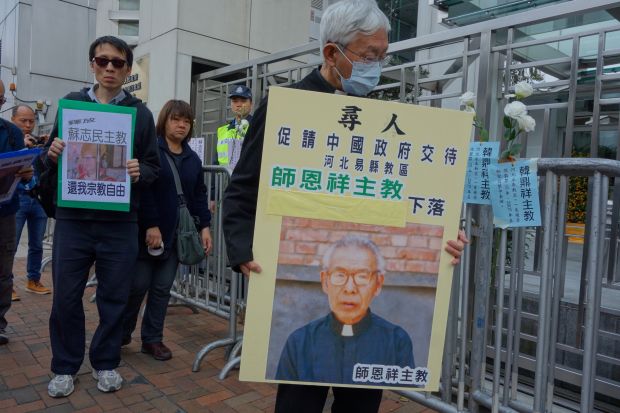 HONG KONG (CNS) — Cardinal Joseph Zen Ze-kiun, retired bishop of Hong Kong, protested at the Chinese Liaison Office in the city and asked the whereabouts of Bishop Cosmas Shi Enxiang of Yixian, who was said to have died in detention.

The 83-year-old cardinal and members of the diocesan justice and peace commission submitted a petition asking the Chinese government to disclose the situation of Bishop Shi. The bishop’s great-niece was told Jan. 30 that the bishop had died, but the government released no more details.

They also sought information on Bishop James Su Zhimin of Baoding, who was arrested in 1997.

The group prayed for disappeared church figures and sang songs for them in front of the liaison office.

Cardinal Zen and the commission members also urged the Chinese government to stop suppressing the church and to respect religious freedom. China requires Catholic leaders to register with the government-controlled Catholic Patriotic Association, which has ordained bishops without the approval of the pope, and Chinese authorities have frequently arrested Catholics who reject government control.

Meanwhile, in a Feb. 16 blog post, Cardinal Zen wrote, “It looks like someone is trying to shut us down.”

He added, “We do not see any sign that would encourage the hope that Chinese communists are about to change their religious policy,” although both the Vatican secretary of state and a pro-Beijing newspaper in Hong Kong recently expressed optimism over Sino-Vatican relations.

In the blog, he also doubted the accuracy of a recent interview with Chinese Bishop Joseph Wei Jingyi of Qiqihar, who was quoted as saying that the Holy See needs to take the first step on Sino-Vatican talks. Cardinal Zen, a member of the Vatican Commission for the Church in China, said he has not been told if there were Sino-Vatican talks, or the progress of such talks if there were any.

He listed a number of thorny issues in the normalization of the church life in China and said that having no agreement between the Vatican and China could be better than having a bad agreement.

The cardinal said, “It is difficult for us to imagine that the representatives of the Holy See can sit down and talk to their communist counterparts without chagrin” when two old Chinese bishops lost their freedom for upholding their faith.