In letter to Arizona teens, pope encourages them in work with migrants 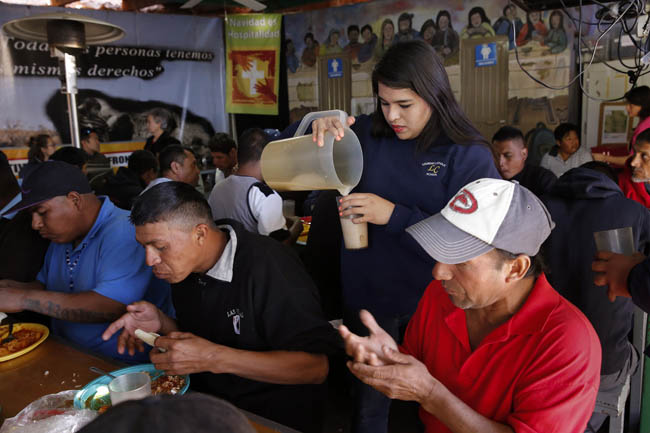 Marian Enriquez, a member of the Kino Teens, serves deported migrants in 2014 at the "comedor," the kitchen and dining hall of the Aid Center for Deported Migrants in Nogales, Mexico. Pope Francis wrote a personal letter to the Kino Border Initiative's executive director praising and encouraging the teens in their work for migrants. (CNS photo/Nancy Wiechec)

“These young people, who have come to learn how to strive against the propagation of stereotypes, from people who only see in immigration a source of illegality, social conflict and violence,” he wrote, “can contribute much to show the world a church, without borders, as mother of all; a church that extends to the world the culture of solidarity and care for the people and families that are affected many times by heart-rending circumstances.”

The pope’s letter, written in Spanish and dated Dec. 19, was responding to letters he received from Jesuit Father Sean Carroll, executive director of the Kino Border Initiative, and Kino Teens at Lourdes Catholic School in Nogales, Arizona.

The Kino Teens support the work of the initiative advocating for more humane and viable migration solutions.

“Your letter and the ones from the Lourdes Catholic School students have touched my heart, not only because of the drama they describe, but also for the hope they manifest,” the pope wrote in his letter addressed to Father Carroll.

(Watch a video the Kino Teens produced for Pope Francis.)

Father Carroll had written the pope about the Kino Teens and invited him to visit the border region in both Nogales, Arizona, and Nogales, in the Mexican state of Sonora. The Arizona border with Mexico is one of the busiest for illegal crossings. It accounts for nearly 30 percent of all U.S. Border Patrol apprehensions.

Twenty Kino Teens wrote letters to the pope describing their experiences living on the border and serving migrants.

“He didn’t say whether he was coming (to the border) or not, but he sent a beautiful letter expressing his gratitude for the letters and his support for what the young people are doing,” said Father Carroll. “It was a wonderful response affirming the work of KBI and the Kino Teens.”

Pope Francis is set to travel to the U.S. in late September and there had been rumors that he might make a stop along the U.S.-Mexico border. His only confirmed visits are to Washington, New York and Philadelphia for the World Meeting of Families. His full itinerary has not been announced, but the pope is expected to be in Philadelphia for the last two full days of the Sept. 22-27 families’ meeting.

In addition to their letters, the Kino Teens produced a video for Pope Francis. It explains their advocacy work and their experiences at the “comedor,” the Kino Border Initiative the soup kitchen the serves deported migrants in Nogales, Mexico.

The pope encouraged the young people “not to tire in their labor of edifying love of others and (their) embrace against discrimination and exclusion.”

PREVIOUS: Pope praises fathers who stay with their kids through everything