Pope praises fathers who stay with their kids through everything 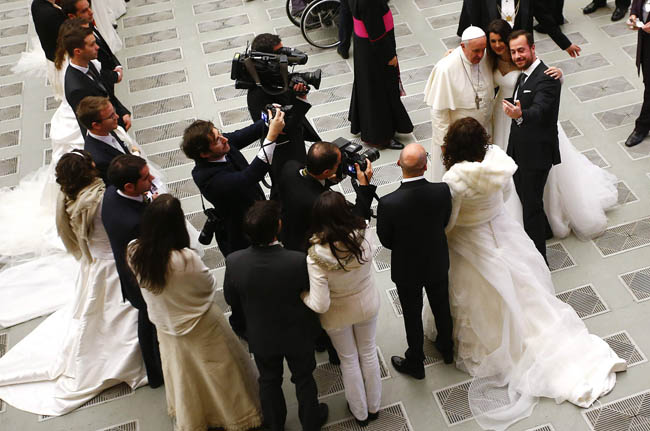 Pope Francis poses for a selfie with a newlywed couple during his weekly audience in Paul VI hall at the Vatican Feb. 4. (CNS photo/Tony Gentile, Reuters)

VATICAN CITY (CNS) — Every family needs a father — a father who shares in his family’s joy and pain, hands down wisdom to his children and offers them firm guidance and love, Pope Francis said.

Being a father is not easy since it takes lots of patience and grace, he said.

“But what consolation, what a reward one receives when the children honor this legacy. It is a joy that more than makes up for the hard work, that overcomes every misunderstanding and heals every wound,” the pope said at his general audience Feb. 4.

In a series of talks on the family, the pope continued the second part of his reflection on the role of fathers. While his last audience talk looked at the risks and problems caused by fathers who are absent or fail their family, the day’s talk focused on the importance and dignity of fatherhood.

Speaking to some 7,000 people gathered in the Paul VI audience hall, the pope spelled out the essential, but demanding, things it takes to be a good father.

The most important is being present, first by being by his wife’s side “to share everything, joy and pain, hard work and hope” and by being there for his children as they grow, he said.

However, being present “is not the same as being controlling, you know, because fathers who are too controlling suffocate their children and don’t let them grow,” the pope said.

A father knows how to firmly correct children’s mistakes without demeaning or demoralizing them, as well as protect them at all costs, the pope said. Guidance does not come from a father who is “weak, yielding and a softie,” he said.

When it comes to corporal punishment, the pope talked about how one father he knew explained his approach when the father admitted “‘sometimes I have to hit my kids a bit, but never on their face so as not to humiliate them.'” The pope praised the man’s respect for the kids’ dignity as he understood the need to punish in a way that was “just” with the ability to “move forward.”

But a good father also knows how to forgive sincerely from the heart and be patient and merciful, like the father in the Gospel account of the prodigal son, he said.

“How much dignity and how much tenderness in that father who is waiting by the door,” waiting for the child who has strayed, he said.

“Yes, fathers must be patient. So many times there’s nothing left to do but wait, pray and wait with patience, tenderness, magnanimity and mercy.”

A parent finds pride not in having the child “be the same as me, who repeats what I say and what I do,” but when the child has received the wisdom and values that really matter in life.

The father will have formed his children’s heart to know on their own what is right and wrong and to feel, speak and act with wisdom and integrity, the pope said.

He said a wise and mature father will be able to say to his children after they’ve grown: “I taught you things that you didn’t know, I corrected errors that you did not see. I let you feel an affection that was both deep and discreet that perhaps you did not fully recognize when you were young and unsure. I gave you witness of rigor and willpower that perhaps you did not understand when you just wanted complicity and protection.”

The good father tempers his emotions and digs deep to find the right words to make himself understood as well as accept the burden of those inevitable misunderstandings, he said.

The father will say to his grown children as they have children of their own, “‘When I see that you try to be this way with your kids and with everyone, I am deeply moved. I am happy to be your father.'”

The pope said that without God and his grace, “fathers lose their courage and walk off the field. But children need to find a father who is waiting for them when they return from their failures. They will do everything not to admit it, not to show it, but they need this, and not finding him opens up in them wounds that are difficult to heal.”

NEXT: In letter to Arizona teens, pope encourages them in work with migrants