Photographs and memories all that remain after kidnap of Iraqi toddler 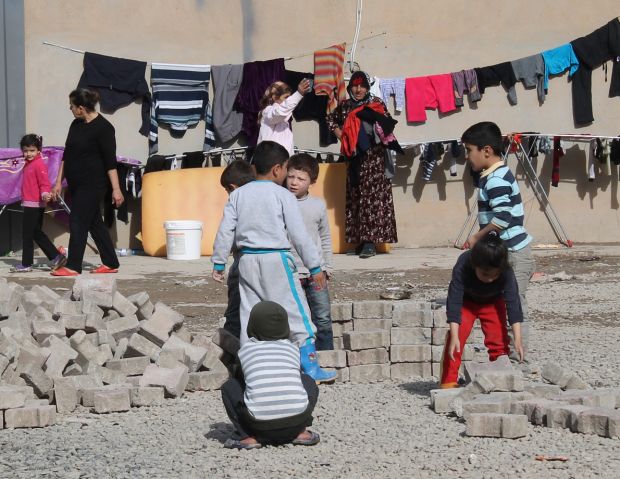 Iraqi Christian children play with concrete blocks Jan. 21 in a new camp set up for the displaced on the outskirts of Ainkawa, Iraq. (CNS photo/Dale Gavlak)

AINKAWA, Iraq (CNS) — A colored photocopy of a smiling, blond toddler is the only thing adorning the bare walls of the tiny room where Ayda Abada, her blind husband, and four children shelter after they were chased out of their Christian village in Iraq by Islamic State extremists.

The picture is one of the few items left of 3-year-old Christina. She is the youngest member of the family and was snatched by the militants from a bus last August as Abada pleaded to have her child back.

Months after the incident, Abada and other displaced Iraqi religious minorities find their lives forever changed and in alarming disarray after attacks by the so-called Islamic State last summer. They wonder if they will ever be able to pick up the pieces of their lives.

The Syriac Catholic woman is clinging strongly to her faith in Jesus, but there has been little solid news about the fate of her daughter to date.

“We lost everything we had in this world, but the most important is for Christina to be returned to us,” she told Catholic New Service late last month.

The slender woman’s frail appearance seems far older than her 40-something years due to the enormous toll the abduction has had on her.

Abada, her husband and Christina remained in their Christian village of Qaraqosh after the Islamic State takeover in August because of her husband’s infirmity. They sent their four other children away with relatives, fearing for their safety, but kept Christina with them because of her young age.

But Abada was forced by the militants to board a bus with her toddler, and one fighter snatched the girl.

“He refused to return her to me despite my frantic pleas,” she told CNS, recounting the traumatic incident.

After Christina’s abduction, the militants expelled Abada and her husband from the town, forcing them to walk for many hours before they reached the safety of Ainkawa.

Abada said her other children, who should attend elementary school, no longer have any interest in going. In October, one son named Christmas proudly showed his schoolbooks to a reporter, along with his English-language lessons. But at the time, there was no possibility for these displaced children to attend school in the Kurdish region.

Now, the children alternate between listlessness and hyperactivity, longing to be reunited with their missing sister.

The family has sheltered in a cavernous concrete skeleton of a shopping mall along with 2,500 displaced people in the Christian enclave of Ainkawa, outside Irbil, the capital of the Kurdistan area of northern Iraq.

In December, Amnesty International released a report that said Islamic State fighters continued to hold hundreds of captives, including children. It spoke of torture, rape, slavery and crimes against humanity and said the militants were especially targeting members of the minority Yezidi community.

NEXT: Patriarchs’ Lenten messages focus on struggles of Mideast Christians