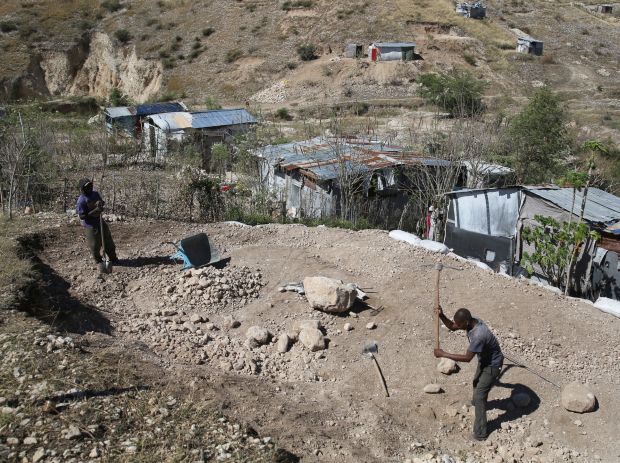 Men work on leveling ground to build a new home in Canaan, a community on the outskirts of Port-au-Prince, Haiti, Feb. 17. Canaan, now with an estimated 250,000 inhabitants, emerged soon after the 2010 earthquake when the government said people could relocate there. (CNS photo/Bob Roller)

PORT-AU-PRINCE, Haiti (CNS) — For the past five years, Elouisna Francois has lived where God sent her.

Never mind that it’s far from her old neighborhood in the capital — where she had made a good life until the country’s January 2010 earthquake — and that there are no basic services, like running water, sanitation or electricity.

For now, home is the sprawling community known as Canaan, in the rolling hills northeast of the city.

Francois said she came to Canaan with a letter stating that the government “officially handed the land to the people.” She relocated with what little she could salvage from her apartment that collapsed during the earthquake.

While Francois acknowledged the drawbacks in Canaan, she said the peacefulness she experiences is more important. She travels to the city occasionally to pick up food and other items she needs to get by.

“I sleep here alone. I’m not afraid,” she said.

Francois is one of as many as 250,000 people who now reside in Canaan. Makeshift homes are scattered as far as the eye can see. The small structures are made of corrugated steel, plywood and pieces of heavy canvas, cut to shape from the remnants of tents distributed by aid agencies in the aftermath of the earthquake. Some residents have panoramic views of the nearby Gulf of Gonave. 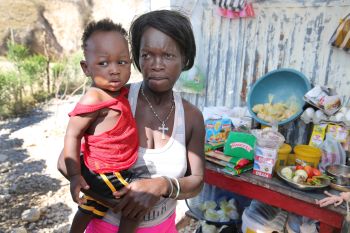 Suzette Jean-Pierre stands with her 9-month-old son, Gevers, at her food stand outside their home in Canaan, a community on the outskirts of Port-au-Prince, Haiti, Feb. 17. (CNS photo/Bob Roller)

The community emerged soon after the earthquake when the government declared the rocky, dusty land about 12 miles from the Haitian capital the place where people could relocate.

However, Canaan exists in a legal limbo. While residents like Francois told Catholic News Service they believe the government approved their relocation, others said they are waiting to be told they can build a permanent structure.

Others have been forcibly evicted, said Dayrri Fils-Aime, a leader of one of the camp committees representing residents.

He told of an incident in December 2013: More than 30 families scurried to protect their meager possessions when a group of men, backed by a bulldozer, descended on the residents and began “breaking down” the homes. The families moved a few hundred feet up the foothills, with village leaders thinking the move was temporary. Fils-Aime said the community has not heard from anyone since. The land where they once lived remained vacant in mid-February.

“It’s the government not doing its job to get these people somewhere,” he said, shaking his head.

“It’s pretty hectic around here,” Fils-Aime added. “You have to have the courage to survive around here.”

The government has said the sprawling settlement is not mean to be a permanent home for the displaced. It has banned construction of permanent homes and has no plans to introduce electrical, water or sanitation services.

A single police kiosk was the only government presence seen in Canaan Feb. 17 along a half-mile section of Route 1, the main road to Haiti’s coastal cities. Advocates for the residents are concerned that because of the absence of any government entities, Canaan will become a slum like the notorious Cite Soleil, where basic services and schooling are nonexistent and rival groups vie for control.

“They have a right to permanent housing,” said Edouardo Ilema, a community organizer with the Force for Reflection and Action on the Cause of Housing, a network of 27 nongovernmental organizations that helps Canaan residents understand their rights to safe and decent housing under the Haitian Constitution. 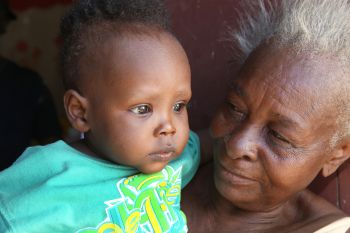 Charity Dorelien, 58, looks at her grandchild in the doorway of a makeshift home in Canaan, a community on the outskirts of Port-au-Prince, Haiti, Feb. 17. (CNS photo/Bob Roller)

Much of Ilema’s work involves documenting living conditions, abuses and evictions. He said he has been attacked once and threatened several times by unidentified men while visiting residents.

Ted Oswald, who with his wife shares the position of policy analyst and policy coordinator for the Mennonite Central Committee in Haiti, said a recent conference that brought together leading nongovernmental organizations focused on the housing crisis the country is facing. While no solutions were finalized, some of the organizations involved are pressing the government to make housing a higher priority, especially for displaced people.

Meanwhile, former Port-au-Prince residents such as Charity Dorelian continue to get by as well as possible. Dorelian, 58, lives in a cobbled-together structure that includes two other adults and four grandchildren.

She said she and her family moved to Canaan after living in a tent camp in Port-au-Prince for three years.

“The state gave some money so we got away from the camp,” she said. “But since they gave us the money they don’t care about you.”

Dorelian said it would be nice if the government would provide water and electrical service. But she’s not holding out much hope at present.

Still, Dorelian appreciates that the family now owns a home rather than paying high rent in the capital. She described her two years in Canaan as safer than the time she spent in a camp in Port-au-Prince, where “bandits cut our tent with a knife.”

Down a hill, a bit closer to the shore, 9-month-old Gevens Jean-Pierre was snuggled in his mother’s arms as he watched his sister, Mitchellda, 12, grate a fresh carrot into a bowl on her lap. She was making juice, a mid-morning treat.

His mother, Suzette, stocks a small supply of staples — vegetable oil, beans, tomatoes, onions, soap — that she sells to her neighbors from a rickety table under a black-and-white patterned bed sheet that provides shade from the hot sun.

The money is paltry, but enough to help the family survive, she said.

Jean-Pierre said she and her husband decided to relocate to Canaan because they had no other option. She described conditions for her family of four children as “not easy at all.”

“Only God” provides hope, she said.

PREVIOUS: Racism and nationalism on the rise in Europe, Catholic leaders say

NEXT: Photographs and memories all that remain after kidnap of Iraqi toddler