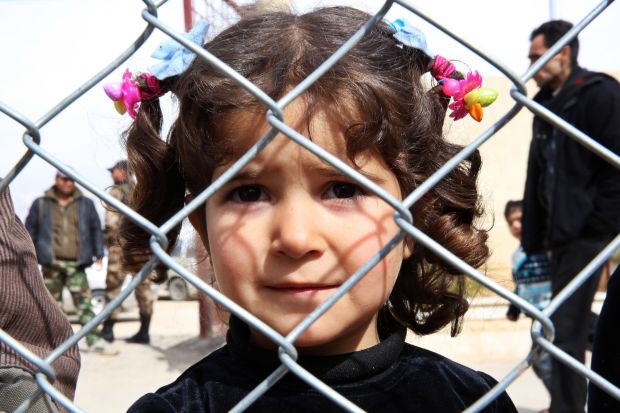 “There is a need for immediate action similar to what took place in Kobani,” Bassam Ishak, president of the Syriac National Council of Syria, told Catholic News Service, referring to a key Kurdish city in Syria.

There, near the border with Turkey and with help from international airstrikes, the Kurds drove out the extremist militants in January after a four-month siege resulted in a victory against the extremists.

Ishak’s appeal to stop the Islamic State advancement has been echoed by Syriac Catholic Archbishop Jacques Hindo of Hassakeh.

“I wish to say quite clearly that we have the feeling of being abandoned into the hands of those Daesh (the Arabic acronym for Islamic State),” Archbishop Hindo told the Vatican’s Fides news service.

“American bombers flew over the area several times, but without taking action,” he said.

Analysts in Washington confirmed his information. They said U.S. planes flew overhead, but there were no airstrikes made against Islamic State militants in the Hassakeh area.

Ishak said the area is being defended mainly by the Syriac Military Council, Christian police called “Sutoro” and Kurdish People’s Protection Units, but all lack sufficient weapons and ammunition. The groups are reportedly seeking immediate air support against the extremists.

On Feb. 27, he told CNS that Islamic State was reinforcing it positions and seemed “to be preparing for a big assault. The lives of hundreds of thousands of Christians and Kurds are at stake. We need action soon before it’s too late.”

“Christians in the city of Hassakeh called me. They are very scared,” he added.

“We have a hundred Assyrian families who have taken refuge in Hassakeh, but they have received no assistance either from the Red Crescent or from Syrian government aid workers, perhaps because they are Christians. The U.N. High Commissioner for Refugees is nowhere to be seen,” Archbishop Hindo told Fides.

The call by Archbishop Hindo, Ishak and other Christian leaders follows a church-burning and kidnapping spree that began Feb. 23.

The extremists attacked a series of Assyrian Christian villages along the Khabur River in the vicinity of the region’s hub of Hassakeh. They reportedly took 150 hostages — with some observers estimating 220 hostages — including women, children and the elderly, and forced more than 3,000 people to flee their homes.

At least one rights activist expressed concern that 30 young Christian women among those abducted would be used as concubines for Islamic State fighters.

“The terrorists first attacked the village of Tal Tamar … and all the many smaller villages as far as Tal Hermiz, where they set fire to everything,” Archbishop Hindo said.

The archbishop spoke of the militants taking “dozens of hostages, with the intention perhaps of using them to obtain a ransom or for an exchange of prisoners,” he added.

Dozens of other families had been captured and taken to the Sunni Arab village of Um Al-Masamier.

“They are alive so far, but the men have been separated from the women and children,” Father Youkhana said.

The priest said the situation represented another example in Syria of what was witnessed in Iraq this past summer: Arab Sunni Muslims joined and supported Islamic State in attacking their lifelong Christian and Yezidi neighbors.

He said the Assyrian Church of the East outside of Syria was communicating the direness of the situation to international agencies and decision makers.

Despite the turmoil and suddenness of the attacks, he said Bishop Aprim Nathniel of the Assyrian Church of the East remains in Hassekeh and is hosting and supporting the hundreds of displaced.

However, Father Youkhana said that because of ongoing conflict, the church lacks the required resources to aid all those in need.

Ishak also warned that if the villages of Tal Tamar and Ras al-Ain were to fall, then Islamic State militants could possibly encircle the area. This, he said, would pose a serious threat to larger towns such as Hassakeh and Amouda. Hassakeh borders Iraq and Turkey, and the extremists see it as a necessary bridge to unite areas under their control in Syria and Iraq.

The Assyrians are an ethnic group whose origins are in ancient Mesopotamia. They are a Christian people; the Chaldean Catholic Church was formed by a group of Assyrians who broke away and joined the Catholic Church in the 16th century. The Assyrians have traditionally lived in what is now Iraq, northeastern Syria, northwestern Iran and southeastern Turkey.

PREVIOUS: Pope names St. Gregory of Narek a doctor of the church

NEXT: Homeless man of deep faith given funeral, burial in Vatican City