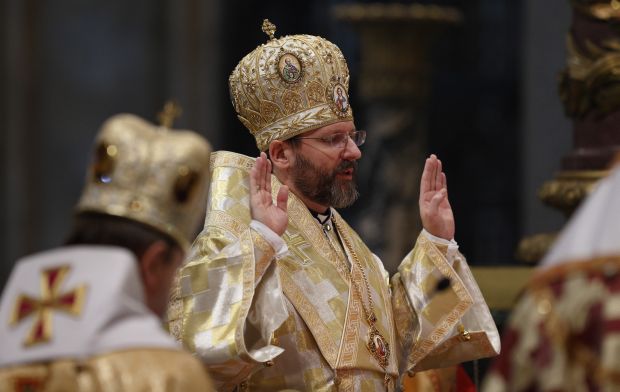 Archbishop Sviatoslav Shevchuk of Kiev-Halych, leader of the Ukrainian Catholic Church, prays during a Divine Liturgy for Ukrainian expatriates at the Basilica of St. Mary Major in Rome Feb. 19. (CNS photo/Paul Haring)

VATICAN CITY (CNS) — Pope Francis urged Ukraine’s Catholic bishops to focus on the social and human tragedies unfolding in their country and avoid politicizing their role as church leaders.

He asked bishops from the nation’s Eastern- and Latin-rite traditions to work together and be a clear moral voice calling for peace and harmony as well as strong defenders of families, the poor and weak.

“The sense of justice and truth is moral before being political, and such a task is entrusted to your duties as pastors, too,” he said in a written address.

The pope met Feb. 20 with bishops from Ukraine’s Byzantine- and Latin-rite communities, who were in Rome Feb. 16-21 for their “ad limina” visits to report on the state of their dioceses. The Vatican said the pope had his two-page written speech handed out to the bishops rather than read aloud.

The pope assured the bishops of his prayers and concerns about the “serious conflict” in their nation and the numerous innocent victims and suffering it has caused.

“In this period, as I have assured you on many occasions directly and through cardinal envoys, I am particularly close to you with my prayer for the deceased and for all those affected by the violence, with prayer to the Lord that he may soon grant peace,” he said.

He said he continues to appeal to “all sides concerned” to respect international law and carry out their agreements, especially a recent cease-fire deal.

However, he said Ukraine’s bishops must avoid becoming politicized, saying “you are not called to give a direct response” to those historical issues and current concerns that have, “in part, a political basis.”

“But there are social-cultural situations and human tragedies, too, that are waiting for your direct and positive contribution,” he wrote.

“In these circumstances, what is important is to listen carefully to the voices that come from the places where the people who are entrusted to your pastoral care live” because it is by listening to one’s own flock that they will be able to help uphold the community’s values of “encounter, collaboration, the ability to settle controversies,” he wrote. “In a nutshell: the quest of possible peace.”

As citizens of Ukraine, the bishops have the right, as individuals and a group, to express their thoughts about their future, he said.

But “not in the sense of promoting a concrete political action, rather in the indication and reaffirmation of the values that make up the thing that holds Ukrainian society together, persevering in the tireless search for harmony and the common good, even in the face of serious and complex difficulties.”

“The Holy See is at your side, also at that of international entities, to make your rights, your concerns and the just evangelical values that motivate you, understood,” he said, adding that the Vatican was looking for ways to best help their pastoral needs.

The pope highlighted the nation’s serious economic problems and the huge income disparities that have also “unfortunately contaminated, to various degrees, public institutions, too.”

Working for truth and justice are moral imperatives, he said, and are a part of their duties as pastors.

“The more you are free ministers of the church of Christ, all the more so, even in your poverty, will you be defenders of the family, the poor, the unemployed, the weak, the ill, the retired elderly, the handicapped and the displaced.”

He also urged the different Catholic communities to be united and work together.

“Personally it hurts me to hear that there are misunderstandings and wounds” between the different Christian rites and traditions in Ukraine, he wrote.

“There needs to be a doctor, and it is Jesus Christ, whom you both serve with generosity and all your heart.”

“We are here to convey the truth to the Holy Father about the situation of Ukraine. This is our whole proposal of the visit ‘ad limina,'” Archbishop Sviatoslav Shevchuk, major archbishop of Kiev-Halych, said Feb. 19.

“And the truth is that we, the Ukrainian people, are the victims,” he said.

The archbishop was responding to questions put to him by Catholic News Service regarding media reports, following the pope’s comments on Ukraine at his Feb. 4 general audience.

Critics said the pope’s choice of words suggested the Holy See views the crisis in eastern Ukraine as a civil war. They also accused the Holy See of using rhetoric in line with the Russian position on the conflict for the sake of keeping positive ecumenical relations with the Orthodox Church.

Noting “the differing interpretations of the pope’s words,” the Vatican press office issued a statement Feb. 10, stating that the pope is “following attentively” the situation in Ukraine and has always addressed “all interested parties” when speaking about the conflict.

However, after a liturgy Feb. 19 to pray for peace in Ukraine, Archbishop Shevchuk spoke plainly with journalists at the Basilica of St. Mary Major, saying the situation in his country can be described “in one word: a war.”

“But we have to say that we do not have a civil war in Ukraine,” he continued. “We have an aggression of a foreign country against the Ukrainian citizens and the Ukrainian state.”

In addition to the fighting, he said the country’s pastors are concerned about the more than 2 million refugees, among them 140,000 children. He said more than 6,000 people, mostly civilians, have been killed to date.

“We are witnessing the biggest humanitarian catastrophe in Eastern Europe, after the end of the Second World War,” he said.

Ukrainians have responded generously to the crisis; about 80 percent of the population is involved in a parish-based volunteer movement, he reported.

Still, there is the need for assistance, he said, launching an appeal to the international community for “help to stop the aggression” and to organize humanitarian aid.

Hundreds of Ukrainian nationals, living in Rome, packed St. Mary Major for the Feb. 19 liturgy to pray for peace in Ukraine, with dozens lining the aisles or sitting on the steps of the side chapels. Cardinal Leonardo Sandri, prefect of the Congregation for Eastern Churches, was also in attendance.

Contributing to this story was Laura Ieraci.

PREVIOUS: To protests deaths, Mexicans mark ’43’ instead of cross in ashes

NEXT: Ukrainian bishops seek to be heard over the din of rhetoric