Ukrainian bishops seek to be heard over the din of rhetoric 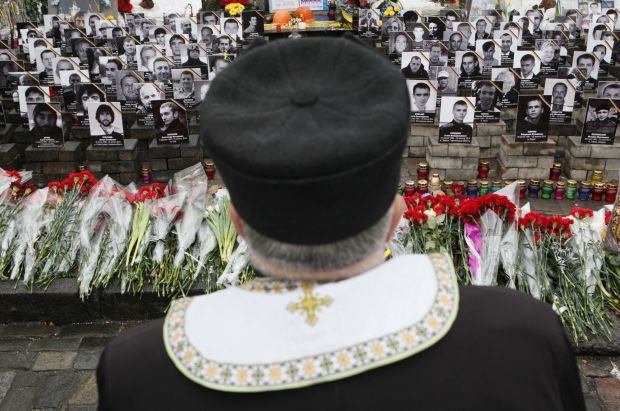 A clergyman stands near photos of people killed in Ukrainian protests in 2014, during a Feb. 20 commemorating ceremony in Kiev's Independence Square. (CNS photo/Valentyn Ogirenko, Reuters)

VATICAN CITY (CNS) — As the Ukrainian Catholic bishops met in a private audience with Pope Francis Feb. 20, Ukraine was marking its first Day of the Heavenly Hundred Heroes, commemorating those who died in the Euromaidan movement one year earlier.

Renamed the Revolution of Dignity, the four months of demonstrations in the Ukrainian capital, from November 2013 to February 2014, saw 120 people killed; Feb. 20 was the bloodiest day.

But as Ukrainians poured into Kiev’s main square to rally for a future aligned with Europe and its values, they probably never imagined they would be drawn into an even bloodier conflict on their eastern border.

Since war broke out in Ukraine’s east, the Ukrainian Catholic bishops have issued multiple calls for peace and humanitarian aid and have sought to sound the alarm on the dynamics of the conflict. But their cries, many say, often have fallen on deaf ears.

The bishops decided to try once again during their “ad limina” visit to Rome, Feb. 16-21.

“We’ve come on this ‘ad limina’ visit … to meet the Holy Father and … to tell the whole world in a loud voice: Do not be indifferent, because indifference kills,” said Archbishop Sviatoslav Shevchuk, major archbishop of Kiev-Halych, in his homily at the Basilica of St. Mary Major Feb. 19.

The Ukrainian bishops had invited the Ukrainian diaspora in Rome to join them at the basilica to pray for peace in Ukraine, one day ahead of the bishops’ audience with Pope Francis. The church held more than 500 people, with every seat filled and people lining the aisles. Ukrainians are among Italy’s largest immigrant communities.

Speaking in both Ukrainian and Italian, the archbishop emphasized the commemoration of the Euromaidan and told the assembly that the 120 people who died were “not indifferent.”

He added that Ukrainians demonstrated they were not indifferent in the face of violence, injustice and disregard for human life and dignity. He warned that the conflict in the country’s east is not just “a Ukrainian crisis” but one with global implications.

“What is taking place now, if it is not stopped, will spread everywhere and can touch every capital in Europe and the world,” he cautioned.

The archbishop’s words struck a chord with the members of the assembly, who interrupted his homily several times with applause; and he roused them to a standing ovation after the emphatic statement, “Ukraine is and Ukraine will be.”

Following the liturgy, Archbishop Shevchuk spoke briefly with reporters about the Ukrainian bishops’ objective to speak frankly during their “ad limina” visit about the situation in their country, which he said can be described with one word: war.

“But we have to say that we do not have a civil war in Ukraine,” he qualified. “We have an aggression of a foreign country against the Ukrainian citizens and the Ukrainian state.”

“We are here to convey the truth to the Holy Father about the situation of Ukraine,” he said. “And the truth is that we, the Ukrainian people, are the victims.”

Taras Rak, who was born in Lviv, said he agreed with the archbishop’s comments about the need to shake off indifference.

“The church says we always need to find peaceful means. Prayer is always efficacious,” said the 34-year-old doctoral student of law. Though he said a U.N.-led military intervention would be needed in Ukraine as well, since “the Minsk peace agreement is not being respected.”

Olga Filipchenko, an Orthodox Ukrainian who has lived in Italy for 12 years, said she wanted to join her Catholic friends in praying for peace.

“I never thought there would be war in our country. We are a peaceful people and we did not expect war,” she said. She spoke of being far from her family, who live about 150 miles from the fighting front.

“I wake up every morning with fear, wondering if my family is OK, checking the television and the newspapers, to see if the war has come to our city,” she said.

Katerina Klapko, who has been supporting her family in Lviv for the past five years as a caregiver in Rome, could say very little across her tears.

“The crisis in Ukraine is too emotional and painful for me,” she said. “I cannot be with my family.”

A Ukrainian Basilian who identified himself only as Father Panteleimon also joined in the prayers for peace. He said he is a native of Donetsk, where much of the fighting has taken place. His parents have sought refuge in Lviv but most of his family members remain in the city. He said he keeps in touch with them regularly.

Archbishop Shevchuk spoke with reporters about the Ukrainian pastors’ concerns for the refugees and victims of the war.

“We are witnessing the biggest humanitarian catastrophe in eastern Europe, after the end of the Second World War,” he said, citing more than 2 million refugees and 6,000 deaths. He appealed to the international community for “help to stop the aggression” and to organize humanitarian aid.