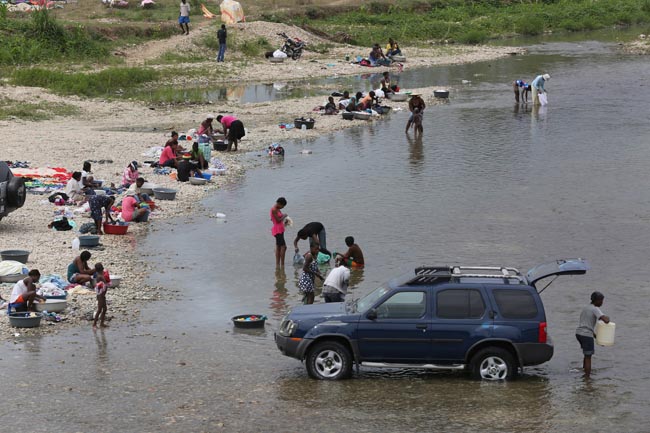 He’s just waiting for the materials to arrive.

With an April 1 opening date looming, Cadet, the hospital’s chief operating officer, knows the checklist of what needs to get done is long. He and his staff are working long hours to make sure there are enough checkmarks on the list so that one of Haiti’s most modern hospitals can begin to accept patients.

“It has to be successful,” he said.

The $22.7 million hospital replaces the hospital of the same name demolished in Haiti’s January 2010 earthquake. Approximately 140 patients and hospital staff members died when nearly every building in the hospital compound collapsed. For weeks, the injured were treated by surviving staff and volunteer health care workers from around the world under tents in the courtyard. The less seriously injured laid outside under the sun and stars.

Cadet, a native of St. Marc, about 50 miles north of the capital, agreed to become COO after working with CRS and the Haitian bishops to plan the new facility. He said his experience from 2006 to 2009 as CEO of St. Boniface Hospital in Fond des Blanc guides his work orchestrating the opening.

Cadet also has deep personal connections to the hospital. His first daughter was born there in 2003 and several family members, including his mother, have been patients there over the years.

The rollout of services will be gradual. At first, pediatrics and internal medicine services will be offered. Then obstetrical and gynecological, general surgery, emergency and outpatient surgery units will open. The hospital eventually will have 190 beds.

Cadet and his staff are working under a five-year plan to expand health care services. It calls for rolling out urology, cardiovascular and cancer treatment units by 2020. Cadet said the cancer treatment facility would be the first in Haiti. People with cancer currently travel to the Dominican Republic, Cuba or the U.S. for treatment.

“It’s like moving into a new house. You really want to get familiar with something so you can be in control. Then you can get in some things that are more sophisticated,” Cadet said.

The 125,000-square-foot, nine-building hospital complex was built by Catholic Relief Services in collaboration with the Haitian bishops’ conference, the Catholic Health Association of the United States and the Sur Futuro Foundation of the Dominican Republic.

Archbishop Guire Poulard of Port-au-Prince told Catholic News Service Feb. 15 he was pleased with the collaborative effort that led to the hospital’s completion.

Bruce Compton, senior director international outreach at CHA, said the hospital continues to be owned by the Port-au-Prince Archdiocese.

“The archdiocese really sees this as a hospital that continues the tradition of the ladies of St. Francis de Sales as a hospital for the people of Haiti,” he explained, referring to the Catholic women who established the hospital in 1881.

From a public health perspective, Cadet sees the development of the hospital as major step forward in health care services in the Haitian capital.

“After the earthquake there was a shortage of beds for the population,” he explained. “When it came to emergency beds, there were none. If you have a problem in the middle of the night or on the weekend in Port-au-Prince, you’re in big trouble.

“So my personal mission at St. Francis de Sales is to make sure we have good emergency service that works and functions 24/7. So when one of my family members is sick, I know there is a good place they can come to and they will have appropriate emergency care. It’s the same for the population, whether you have money or you don’t have money. Whenever you’re sick you can come here and find the service that you need and the attention that you need.”

Cadet and Dr. Kens St. Louis, health system coordinator for CRS in Haiti, are working to establish a network among nine faith-based hospitals around the country for joint purchasing of equipment and supplies, training and equipment maintenance. The network would include eight Catholic hospitals and a ninth operated by the Salvation Army.

“We will grow up. I know that,” said St. Louis, who practiced medicine for two years before focusing on health care administration. “But it is step by step.”

St. Louis, Cadet and Bishop Toussaint also are working to establish the hospital’s board of trustees. Contacts have been made to leaders in Haiti’s financial, business and church communities to invite to guide the hospital’s future.

Cadet dreams that if the St. Francis de Sales effort works, it can be a model for future collaborative efforts to open similar facilities around Haiti.