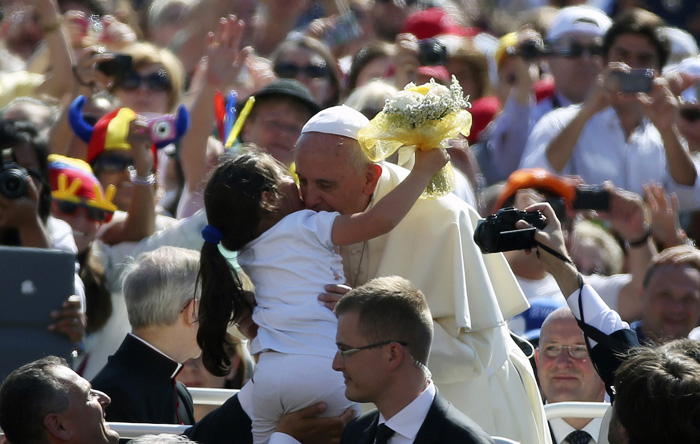 Pope Francis embraces a girl as he arrives to lead his weekly general audience in St. Peter's Square at the Vatican June 4. (CNS photo/Alessandro Bianchi, Reuters)

VATICAN CITY (CNS) — Liberty and equality are not enough for the well-being of a nation, there must also be a strong sense of brotherhood that is first developed and nurtured in the family, Pope Francis said.

Without seeing each other as brothers and sisters, a nation’s citizens may distort these values, letting freedom and equality “be filled with individualism and conformity,” he said at his general audience Feb. 18.

The pope continued a series of talks on the family by focusing on the importance of brothers and sisters, and how Christianity places special emphasis on the fraternal ties that unite the whole human family.

Speaking to more than 9,000 people gathered in St. Peter’s Square, the pope said, “The bond of fraternity that forms in a family among brothers and sisters, if it happens in an atmosphere of learning to be open to others, is the great school of freedom and peace.”

“It is precisely the family that introduces fraternity to the world” because it is in the family that siblings learn “the human coexistence that one must live out in society,” he said.

Thanks to the affection and values experienced in the family, he said, this “fraternal style radiates out like a promise onto all of society.”

God, through his son Jesus, brings further graces upon this natural bond, making it something that can “surpass all national, linguistic, cultural and even religious differences,” he said.

In fact, it is the Christian sense of brotherhood that lets people who are otherwise vastly different see and love each other as brother and sister, he said.

“For that matter, history has shown well enough that even liberty and equality, without fraternity, can be filled with individualism and conformity, even greed.”

“Today, more than ever, it is necessary to bring fraternity back to the heart of our technocratic and bureaucratic society so that freedom and equality also will find perfect harmony.”

“Therefore, let us not light-heartedly deprive our families — out of apprehension or fear — of the beauty of having a broad experience” of being a brother or sister, and do not lose faith in what God’s blessings can bring, he said.

Just as family members love and help each other, showing special care for those who are little, weak or sick, Christians, too, feel a special tenderness for those most in need, he said.

“The least, the weakest and the poorest must move us,” the pope said. “They have a ‘right’ to capture our hearts and souls.”

Unfortunately, brotherly bonds are often broken, and families may have siblings who have quarreled over big or “little things, over an inheritance, and then they don’t speak to one another, they don’t greet one another and this is terrible,” the pope said.

Jealousy and conflict tore apart the first fraternal bonds, those of Cain and Abel, and from that time on, God keeps asking every generation: “‘Where is your brother?’ And unfortunately, in every generation, Cain’s dramatic reply doesn’t stop repeating itself, ‘I do not know. Am I my brother’s keeper?'”

Having a sibling “is a great thing. Think how every brother and sister lived in the womb of the same mother for nine months, they come from the mother’s flesh,” said the pope, who was one of five children. “You cannot sever fraternity.”

The pope asked those at the audience to always pray for families who are divided and ask God to help rebuild those bonds that should never be broken.

At the end of the audience, the pope greeted Catholic bishops from Ukraine who were in Rome for their “ad limina” visit to report on the state of their dioceses. Speaking in Italian, with his words translated into Ukrainian by an aide, the pope said he, too, was praying that lasting peace would come “as soon as possible” to their nation.

NEXT: Racism and nationalism on the rise in Europe, Catholic leaders say