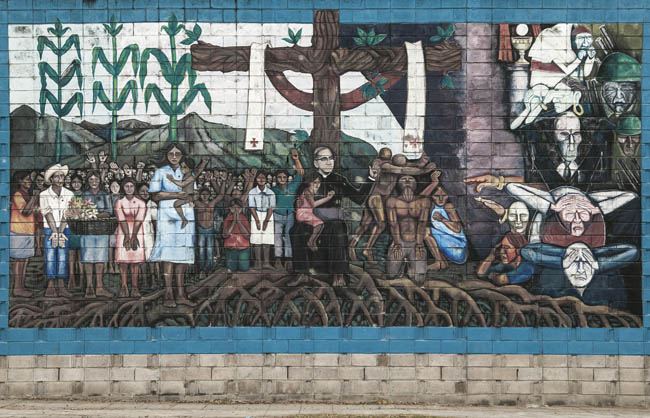 A mural depicting Salvadoran Archbishop Oscar Romero is seen in 2005 outside the San Salvador hospital where he was killed while celebrating Mass, March 24, 1980. (CNS photo/Octavio Duran)

When the pagan emperors of Rome carried out bloody campaigns against Christians during the first three centuries of the church’s history, the Christian community had no difficulty in recognizing they were killed “out of hatred for the faith.”

At first glance, the 1980 assassination of Salvadoran Archbishop Oscar Romero did not fit the classic formula for martyrdom, which relied on both the faith of the victim and the anti-Christian motivation of the killers. Archbishop Romero’s assassins were not carrying out a campaign of terror against the church as a whole; they targeted Catholic catechists, religious and clergy they saw as political opponents.

However, like the classic martyrs, Archbishop Romero knew his life was in danger. The Vatican even offered him shelter, but he refused to leave his people, said Archbishop Vincenzo Paglia, the chief promoter of the archbishop’s cause. In early February, Pope Francis signed a decree recognizing Archbishop Romero’s martyrdom.

When it comes to formal causes for sainthood, “martyr” is a technical term. Defining it and elaborating the conditions necessary for recognizing martyrdom has been at the heart of a high-level Vatican debate for more than 40 years.

The cause that sparked the discussion was that of Conventual Franciscan Father Maximilian Kolbe, who was imprisoned in the Auschwitz concentration camp during World War II.

When a prisoner escaped from the camp, Nazi officials announced 10 would die in his place. One of the 10 chosen begged to be spared because he had a wife and children. Father Kolbe stepped forward and asked to take the man’s place. The commandant agreed, and Father Kolbe and the other nine were locked up in a bunker to starve to death. When guards entered the bunker to remove the bodies, Father Kolbe was still alive. They killed him with an injection of carbolic acid.

The Nazis did not throw Father Kolbe into the bunker or give him the lethal injection because of his Catholic faith, so when Pope Paul VI beatified Father Kolbe in 1971, it was not as a martyr, even though in his homily Pope Paul referred to the Franciscan as a “martyr of charity.”

But at Father Kolbe’s canonization ceremony in 1982, Pope John Paul said many bishops, especially in Poland and Germany, said “martyr of charity” was not enough. They wanted him proclaimed a saint and martyr with full honors.

“Is not his death faced spontaneously out of love for his fellow man a particular fulfillment of the words of Christ, who said, ‘No one has greater love than this: to lay down one’s life for one’s friends,'” Pope John Paul said in his homily at the ceremony.

The pope explained, “In virtue of my apostolic authority I decreed that Maximilian Maria Kolbe, who following beatification was venerated as a confessor, from this moment on also would be venerated as a martyr.”

Most recently, the Congregation for Saints’ Causes studied the definition and conditions for the recognition of martyrs during its 2006 plenary meeting and Pope Benedict XVI weighed in. While the strength of the faith of martyrs has remained unchanged, he said, “the cultural contexts of martyrdom and the strategies on the part of the persecutors” have changed.

In most cases, he said, modern persecutors attempt to hide their hatred of the Christian faith and Christian virtues, claiming to act, for example, in defense of “political or social” ideologies. Still, he said, a person cannot not be declared a martyr without “irrefutable proof” of his or her willingness to die for the faith and without “moral certainty” that the persecutor’s action stems “directly or indirectly” from a hatred of the faith.

Beatification and canonization are solemn steps the church takes very seriously and usually moves toward with great caution. But even for martyrs, the Vatican sees the devotion of Catholic faithful as an obligatory sign of the holiness of a candidate and of the appropriateness of proposing the candidate for public veneration.

In the case of Archbishop Romero, Archbishop Paglia said, the decades of recognition on the part of Catholic faithful that he was a martyr tipped the scales.

“In this case, it was the faith of the people of God that made the church change its thinking or, better, led the church to be more precise about what martyrdom means,” he told Catholic News Service.

“Beginning with St. Kolbe,” the archbishop said, the church has recognized that many of the martyrs of the 20th century “were killed in ‘hatred of the faith’ — not an abstract faith, but in hatred of a faith that has pushed Christians since the time of Jesus to stand alongside the poor and weak and to give their very lives for others.”