Vatican gives tips on preparing homilies, tying them to catechism 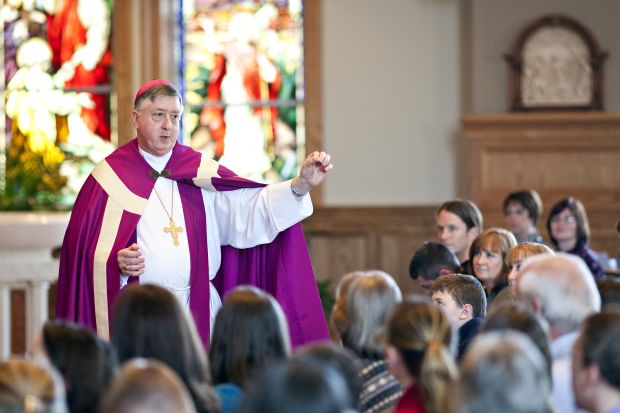 Bishop Mitchell T. Rozanski is pictured in 2012 giving the homily during the Rite of Election and Call to Continuing Conversion at St. Peter the Apostle in Libertytown, Maryland. (CNS photo/Tom McCarthy Jr., Catholic Review)

VATICAN CITY (CNS) — A homily at Mass is not a mini catechism class, the Vatican says in a new document on homilies, but it is an opportunity to explain church teaching using the Scripture readings and the Catechism of the Catholic Church.

“In the broadest sense, the homily is a discourse about the mysteries of faith and the standards of Christian life,” says the Homiletic Directory published by the Congregation for Divine Worship and the Sacraments.

Dated June 29, 2014, and approved by Pope Francis, the directory was released at the Vatican Feb. 10, along with an appendix of passages from the catechism matched to each of the three readings for the three-year cycle of Sunday Masses and major holy days. It also includes notes on preaching at weddings and funerals, two occasions when, it says, many of the people present may not be regular churchgoers.

Guinean Cardinal Robert Sarah, whom Pope Francis named prefect of the worship congregation in November, told reporters that for many Catholics the homily, experienced as “beautiful or awful, interesting or boring,” is their basis for judging an entire Mass.

British Archbishop Arthur Roche, congregation secretary, said it is important that “a homily isn’t boring.” If one looks at the homilies of Pope Francis, he said, “there is nothing boring. There is always something that challenges people. This is the point.”

Montfort Missionary Father Corrado Maggioni, congregation undersecretary, said laypeople can help their priests. “We priests may need someone to tell us: ‘It’s too long,’ ‘It’s too repetitive’ or maybe ‘Little notes might help you not go off on a thousand tangents.'”

Pope Benedict XVI had asked the congregation to draw up the directory after many participants at the 2005 Synod of Bishops on the Eucharist and the 2008 synod on the Word of God requested a handbook to help priests with their homilies.

Because of “the integral bond” between the homily and the Eucharist and because the homily itself is “an act of worship,” the directory reaffirms church discipline that only ordained ministers — bishops, priests or deacons — are to deliver the homily at Mass.

“Well-trained lay leaders can also give solid instruction and moving exhortation, and opportunities for such presentations should be provided in other contexts,” but not at the moment after the readings and before the liturgy of the Eucharist at Mass, it says.

Preaching at Mass, the homilist should show people how God’s word is being fulfilled in their midst, how it calls them to growth and conversion and how it prepares them to celebrate the Eucharist, the directory says.

“The homily in some sense parallels the distribution of the Lord’s body and blood to the faithful during the Communion rite,” it says. “In the homily God’s holy word is ‘distributed’ for the nourishment of his people.”

The document includes quotations from the long section about preparing and delivering homilies in Pope Francis’ 2013 apostolic exhortation, “Evangelii Gaudium” (“The Joy of the Gospel”), including his belief and practice that the homily “should be brief.”

In making suggestions, the directory notes that its application can and should vary depending on the congregation and the individual preacher with his “gifts and limitations.”

In general, however, it says an effective homily always requires prayer, preparation, knowledge of the people who will be in the congregation, a reflection on what is happening in the community and the world, and an invitation to the Holy Spirit “as the principal agency that makes the hearts of the faithful amenable to the divine mysteries.”

While the directory offers suggestions for how to tie specific Sunday readings to church teaching on a variety of theological and moral topics, it insists a homily cannot “address some issue completely unrelated to the liturgical celebration and its readings” or “do violence to the texts provided by the church by twisting them to fit some preconceived idea.”

“The homily is not catechetical instruction, even if catechesis is an important dimension of the homily,” it says. And, while the preacher’s personal experience can help illustrate a point, “the homily should express the faith of the church and not simply the priest’s own story.”

The second part of the directory, focused on the “art of preaching,” gives practical suggestions for putting together prayer, biblical study and the catechism in preparing homilies for the Masses of the Triduum and Easter season, the Christmas season and the Sundays of Lent and Advent.

On the feast of the Holy Family, immediately after Christmas, for example, it encourages preachers not to ignore the “great challenges” facing families, but “rather than simply giving a moral exhortation on family values,” they should reflect on how the readings present the family as a school of virtue and discipleship.

It even includes suggestions for handling that Sunday’s optional reading which includes verses 3:18-19 of St. Paul’s Letter to the Colossians: “Wives, be subordinate to your husbands, as is proper in the Lord. Husbands, love your wives, and avoid any bitterness toward them.”

However, the directory says, it is possible to explain the passage. “The originality of the Apostle’s teaching is not that wives should be submissive to their husbands; that was simply presumed in the culture of his day,” it says. “What is new, and distinctively Christian, is, first, that such submission should be mutual” and, second, that “mutual submission in the family is an expression of Christian discipleship,” of laying down one’s life for others.