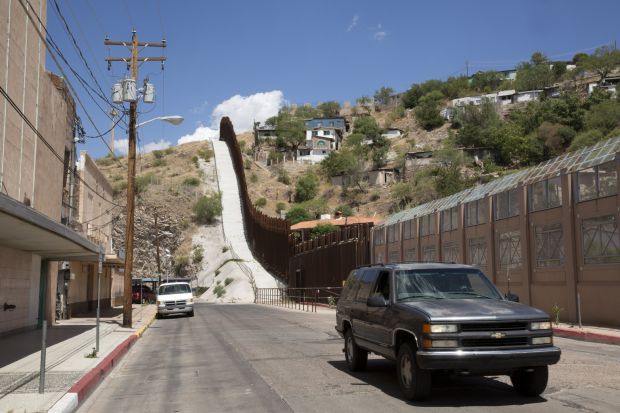 A border fence separates the sister cities of Nogales. On the left sits Nogales, Ariz., on the right is Nogales, in the Mexican state of Sonora. Pope Francis has erected the new Diocese of Nogales in northern Mexico, the Vatican announced March 19. (CNS/Nancy Wiechec)

PHOENIX (CNS) — Those working on behalf of migrants said they hope to have more advocates and support with the creation of the Diocese of Nogales in Mexico.

“It’s a great blessing that has the potential to facilitate more binational cooperation as church, especially in regard to migrant ministry efforts,” said Jesuit Father Sean Carroll, who directs the Kino Border Initiative.

“We hope to be able to invite the new bishop (of Nogales) to see our work and to draw more attention to migrants, their lived reality, the abuses they endure and the challenges that they face.”

The Vatican announced the formation of the new diocese March 19. Its 17,000 square miles was carved from northern portions of the ecclesiastical territory of Hermosillo and includes 17 municipalities, including Nogales. Pope Francis named Bishop Jose Leopoldo Gonzalez Gonzalez, 60, to head the new diocese. He has been an auxiliary bishop of the Archdiocese of Guadalajara, Mexico.

Since its establishment in 1882, Nogales has served as a gateway for goods and people moving in and out of Mexico. Known collectively as “Ambos Nogales,” (Both Nogales), the cities in Arizona and the Mexican state of Sonora are split at the international border by a towering border fence. Nearly 10 million people and an estimated $20 billion in trade cross the Nogales ports of entry each year. Nogales, Arizona, is within the Diocese of Tucson.

Numerous church and other action groups exist in Nogales to serve scores of migrants. Those making their way unlawfully into the U.S. face dangerous desert crossings in their attempts. They risk heat stroke, dehydration and other perils and often are victims of abuse and violence by human smugglers, gangs and thieves. 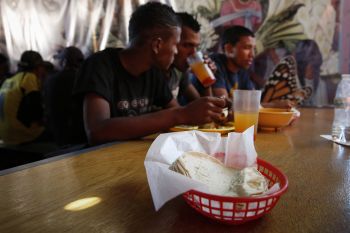 Deported migrants dine at the Kino Border Initiative soup kitchen in Nogales, in the Mexican state of Sonora, in this 2014 photo. (CNS/Nancy Wiechec)

The Kino Border Initiative operates on both sides of the border. In Nogales, Sonora, it runs a support center, soup kitchen and first-aid station for deported migrants and a shelter for migrant women and children.

Having Nogales as the central point for the church in the border area will strengthen migrant ministry, as well as evangelization and catechesis there, said Ignacio Rodriguez, the Phoenix representative for Dioceses Without Borders. He said plans for the Diocese of Nogales have been in the works for at least a decade.

“It’s really good news that this has come to fruition,” he said. “It will bring even stronger solidarity to the good work that is already happening on the border.”

Dioceses Without Borders is an alliance of the Archdiocese of Hermosillo, Mexico, and the dioceses of Tucson and Phoenix. It was formed to help bring cohesion to church outreach in border communities, Rodriguez said.

“I am very thrilled that the Holy See has finally established the Diocese of Nogales, Sonora,” said Bishop Gerald F. Kicanas of Tucson. He said he first heard of plans for the new diocese when he arrived in Arizona in 2002.

“Having a bishop so close will be a blessing,” he said. “We are neighbors, and I look forward to having Bishop Gonzalez Gonzalez there. We have many common pastoral concerns and will have plenty of opportunities to work together.”

“The presence of a diocese in Nogales will be very helpful in attending to some of the migrant issues in the area,” he agreed.

A number of Mexican youths cross the border each weekday to attend Catholic schools in Nogales and in Douglas, Arizona. And many Catholic volunteers from the Tucson Diocese cross into Mexico to help with migrant aid. Bishop Kicanas said these “positive relationships” can only be strengthened by the presence of a diocese in Nogales.

The creation of new dioceses is not all that common, yet in the past 10 months, Pope Francis has named two in Mexico — Izcalli in central Mexico and Nogales.

The Catholic population of the Diocese of Nogales totals 381,398 people and includes 25 parishes, 44 priests, 62 sisters and 13 seminarians. It features part of the “Ruta de las Missiones,” the string of missions established between 1687 and 1711 by Jesuit Father Eusebio Francisco Kino.