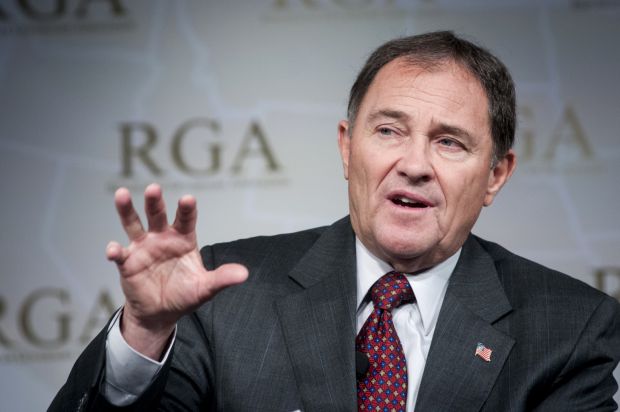 Utah Gov. Gary Herbert, seen in a 2013 photo, has signed into law a bill reinstating use of a firing squad as a method to carry out the death penalty. Bishop John C. Wester of Salt Lake City called Herbert's action disappointing and said lawmakers "have substituted state legislation for the law of God." (CNS photo/Rick D'elia, EPA)

SALT LAKE CITY (CNS) — By reinstating the use of a firing squad as a method of execution in Utah, “it seems as if our government leaders have substituted state legislation for the law of God,” said the state’s Catholic bishop.

“They argue that, because executions are lawful, they are then moral. This is not so. No human law can trump God’s law,” Salt Lake City Bishop John C. Wester said in a March 24 statement. “Taking a human life is wrong; a slap in the face of hope and a blasphemous attempt to assume divine attributes that we humble human beings do not have.”

“The real issue here is the death penalty itself,” he said.

A day earlier, Republican Gov. Gary Herbert signed into law a bill that reinstates execution by firing squad for those convicted of capital crimes. It was passed by the state Senate March 10 and by the state House in February.

Bishop Wester said he was “very disappointed” that Herbert signed the measure on firing squads.

The death penalty itself is the issue, because “only God can give and take life,” he said. “By taking a life, in whatever form the death penalty is carried out, the state is usurping the role of God. Execution does violence to God’s time, eliminating the opportunity for God’s redemptive and forgiving grace to work in the life of a prisoner.”

Utah is now the only state that has the firing squad as a method of execution.

“The death penalty in any form is abhorrent,” Bishop Wester said in an earlier statement, but with regard to the firing squad method, he noted that “strapping a person to a chair with a hood over his head and a bull’s eye on his heart creates a disturbing image of the individual as little more than a target at a shooting range.”

The Associated Press quoted Herbert’s spokesman as saying that enforcement of capital punishment is “the obligation of the executive branch. “We regret anyone ever commits the heinous crime of aggravated murder to merit the death penalty, and we prefer to use our primary method of lethal injection when such a sentence is issued,” spokesman Marty Carpenter said.

Bishop Wester March 24 noted that the next scheduled execution in Utah will not take place for several years, so “our legislators and governor might still repair the damage caused by the death penalty.”

He urged Herbert and the Utah Legislature “to place a moratorium on further death sentences and pass legislation to abolish state-sanctioned destruction of human life.”