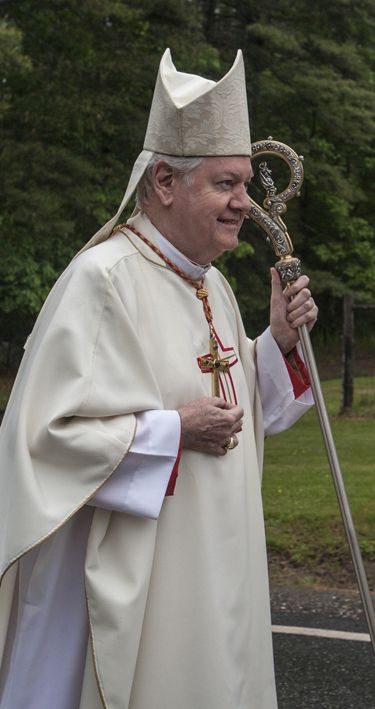 Cardinal Edward M. Egan, retired archbishop of New York, died at age 82 March 5 of cardiac arrest at a New York hospital. He is seen in a 2007 photo. (CNS photo/Octavio Duran)

NEW YORK (CNS) — Cardinal Edward M. Egan, who retired as archbishop of New York in 2009, died March 5. The cause of death was cardiac arrest. He was 82.

After collapsing at his residence that afternoon, he was taken to NYU Langone Medical Center, where doctors pronounced him dead at 2:20 p.m.

Cardinal Timothy M. Dolan of New York told Catholics of the archdiocese he was saddened to tell them “our beloved” Cardinal Egan “has gone home to the Lord.”

“Join me, please, in thanking God for his life, especially his generous and faithful priesthood. Pray as well that the powerful mercy of Jesus, in which our cardinal had such trust, has ushered him into heaven,” said Cardinal Dolan, who succeeded Cardinal Egan.

“My sympathy to his natural family, who will grieve for their uncle, and to you, his spiritual family here in the Archdiocese of New York,” he added.

In Philadelphia, Archbishop Charles Chaput said in a statement that he was “deeply saddened” to learn of the cardinal’s death.

“On behalf of the Church in Philadelphia, I extend prayerful condolences to Cardinal Egan’s family and many friends as well as Cardinal Timothy Dolan and the priests, religious and lay faithful of the Archdiocese of New York.

“I ask the people of the Archdiocese of Philadelphia to offer prayers for Cardinal Egan, and I invite our priests to offer Masses for the repose of his soul. All of us are very grateful for the gifts of his life and service to the Universal Church. May God grant him the gift of eternal life, and give peace and consolation to all those who loved, admired, and respected him.”

Cardinal Dolan in his statement said that Cardinal Egan “had a peaceful death, passing away right after lunch today, with the prayers and sacraments of his loyal priest secretary, Father Douglas Crawford, in his residence at the Chapel of the Sacred Hearts of Jesus and Mary.”

He said the retired archbishop was rushed from the residence to the medical center, where he was pronounced dead.

In a telegram to Cardinal Dolan, Pope Francis offered his heartfelt condolences.

“I join you in commending the late cardinal’s noble soul to God, the father of mercies,” the pope said, “with gratitude for his years of episcopal ministry among Christ’s flock in Bridgeport (Connecticut) and New York, his distinguished service to the Apostolic See, and his expert contribution to the revision of the church’s law in the years following the Second Vatican Council.”

In retirement, Cardinal Egan assisted in the works of the New York Archdiocese. For the Vatican, he served on the Council of Cardinals for the Study of the Organizational and Economic Problems of the Holy See for five years and participated in the 2005 conclave that elected Pope Benedict XVI.

With his death, the College of Cardinals now has 226 members, 125 of whom are under 80 and therefore eligible to vote in a conclave to elect a new pope.

He was ordained a priest of the Chicago Archdiocese Dec. 15, 1957, at the North American College, in a ceremony that also included J. Francis Stafford, another future cardinal. After further studies in Rome, he returned to Chicago in 1958 to serve as parochial vicar of Holy Name Cathedral Parish, assistant chancellor and secretary to Cardinal Albert G. Meyer.

Back in Rome for doctoral studies from 1960 to 1964, he also served as assistant vice rector of the North American College. Again in Chicago from 1965 to 1972, he was secretary to Cardinal John P. Cody, archdiocesan vice chancellor and co-chancellor for ecumenism and social relations.

Named an auditor of the Roman Rota, the Vatican tribunal primarily responsible for hearing requests for marriage annulments, in November 1972, then-Father Egan also was a professor of civil and criminal procedure at the Studio Rotale and of canon law at the Gregorian; commissioner of the Vatican Congregation for Divine Worship and the Sacraments; a consultor to the Vatican Congregation for Clergy; and, in 1982, one of six canonists who reviewed the new Code of Canon Law with St. John Paul II before it was promulgated in 1983.

Cardinal Egan was the first head of the New York Archdiocese to retire from the post. The three bishops and eight archbishops who preceded him all died in office.