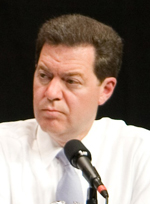 Brownback sat down with CNS while at a political conference near Fort Washington to discuss his state’s current efforts at pro-life legislation and his natural law approach to the pro-life movement.

“The pain-capable bill is the biggest one that’s moving right now,” Brownback said Feb. 28 when asked about his efforts on pro-life legislation. “We’ve done it in Kansas, where at 21 weeks … that the child feels pain and we limit abortions then.”

“We’ve also got a really good bill coming up on the dismemberment procedure,” he continued, “saying that you can no longer perform an abortion using this procedure of dismembering a child before you remove it.”

Brownback is optimistic about the bill, S.B. 95, which was drafted with help from the National Right to Life Committee, based on the precedent set by the partial-birth abortion debate.

The federal Partial-Birth Abortion Ban Act, upheld by the Supreme Court in 2007, outlaws a procedure is used in late-term abortions.

Brownback called the reality of the dismemberment procedure, often used in second-trimester abortions, “a graphic reminder about how horrific abortion is. There are actually abortions performed in the U.S. today where you actually dismember an unborn child to pull it out. … You wouldn’t do that to a dog, yet it’s legal in the United States.”

In response to the Pain-Capable Unborn Child Protection Act’s failure to come to a vote in the U.S. House of Representatives Jan. 22, the governor said that he “didn’t like it, but it also reminds me that the way you move this forward typically is that you pass it in a bunch of states … you change America by changing states.”

As an example, he cited the several states that currently have pain-capable legislation, which limits abortions to around 20 weeks after conception, where studies have shown than unborn children can respond to painful stimuli.

When asked whether his Catholic beliefs influenced his efforts in regard to pro-life legislation, Brownback said that “they do, but I also think it’s a natural law thing. Should you really be killing people, whether you have a Catholic faith or not? It just doesn’t seem right.”

“You have to approach this (the life debate) from a natural law argument that people agree with,” he explained.

Natural law reasoning and approaches have proven helpful in passing legislation and showing a lack of political consequences in doing so, according to Brownback.. “People don’t like killing children; they just agree with it!”

South Dakota was the first state to use dismemberment bill language in 2014, and the Oklahoma state House in a 84-2 vote recently passed a similar measure to the Kansas bill in February. Eleven states currently have fetal pain laws in place, while the South Carolina General Assembly also is currently considering one which is expected to pass both houses.