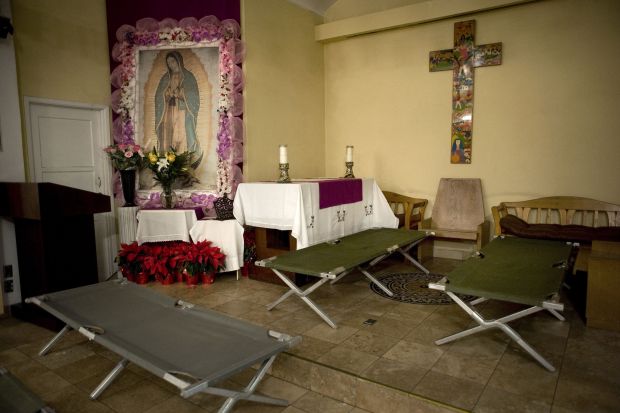 Cots for homeless and undocumented migrants are seen at Mission Dolores Catholic Church in Los Angeles in this Dec. 17, 2014, photo. Mission Dolores' Gaudalupanos Homeless Project is an example of the church's outreach to immigrants.(CNS photo/David Maung, EPA)

WASHINGTON (CNS) — The Catholic Church in the United States has had a long history of being a voice for immigrants and it continues to do so but in new ways, said speakers at a March 12 conference at The Catholic University of America.

There has been so much church involvement on this issue that a few of the panelists at the conference: “American Catholics and Immigration: Past and Present” said their allotted time to speak wasn’t nearly enough to delve into the topic.

“It’s an incredibly complex issue. I can’t do it justice in 15 minutes,” said William Dinges, a theology professor at Catholic University. He said at best, he could present the church’s evolving role in a presentation “akin to speed dating” during the panel discussion on culture and religious life.

Dinges was one of several panelists in the daylong discussion sponsored by American Catholic History Research Center and University Archives, the Institute for Policy Research & Catholic Studies, and the Office of Migration and Refugee Services of the U.S. Conference of Catholic Bishops.

At the turn of the last century, Dinges said the church “enabled immigrants to assimilate” and provided for their needs through church-sponsored charities, hospitals and schools. Catholic parishes for different ethnic groups also reinforced a strong religious culture.

“The parish loomed large in the vibrancy of Catholic Church,” Dinges said, noting that if someone asked where you were from they quickly followed it by asking what parish you belonged to.

Different immigrant groups brought their particular ways of praying and their devotions — especially to Mary and the saints — to their new churches. These practices continue today but now these traditions are often competing.

“There can be clash of devotions at parishes,” because people want to keep their own ways of praying, said Father Aniedi Okure, executive director of Africa Faith and Justice Network in Washington.

He said the challenge today is to try not to give one group too much attention at a parish that would alienate another group. He also suggested that leaders from different ethnic groups be given pastoral council positions.

Hernandez, a native of El Salvador, said churches need to do more than just clap for people attending the parish for the first time. At his parish — where there are weekly Masses and faith formation programs in English, Spanish and French — he said parishioners look for newcomers and find out what they can do for them and they also try to get newcomers involved.

Another challenge for parishes, he said, is to reach out to second and third generations of immigrant communities who might not be as interested in cultural and faith traditions or even the native language of their parents and grandparents.

The church continues to support workers, said Father Evilio Menjivar, pastor of Our Lady Queen of the Americas Parish in Washington and member of the Priests Labor Initiative which supports and advocates for workers’ rights.

He said he has recently attended rallies with hotel workers and airline kitchen workers seeking better treatment and compensation.

Workers do not want “big things” from the priests who join them at these rallies, he said. “They just want our presence … to know the church is with them and what they are doing is good.”

Joseph McCartin, associate professor of history at Georgetown University and executive director of Kalmanovitz Initiative for Labor and the Working Poor, stressed that the church is poised to be a powerful voice for workers today by bringing a global vision and moral clarity to labor issues and economic questions.

The church can also continue to provide a “powerful language of solidarity,” he said, especially if it acts on the “vision that Pope Francis is clear on.”

PREVIOUS: Potential buyer of Catholic hospitals in California backs out of deal