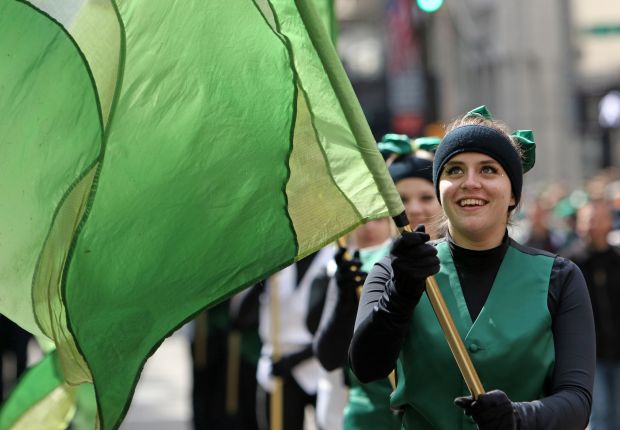 NEW YORK (CNS) — For the first time in its history, the St. Patrick’s Day Parade in New York, the nation’s oldest and biggest parade, allowed a gay contingent to march, alienating some Catholics and angering others who wanted more gay organizations to be included in the event.

New York Cardinal Timothy M. Dolan was this year’s grand marshal, leading the 254th annual procession for a ways on Fifth Avenue. He then returned to St. Patrick’s Cathedral, to review the parade from the steps of the church.

Earlier, he had been the main celebrant of a special noon Mass at the cathedral to honor St. Patrick, the fifth-century bishop, apostle of Ireland and patron saint of the New York Archdiocese.

Last September, organizers of the New York parade announced they would allow Out@NBCUniversal, an organization of gay employees of NBCUniversal, the parade broadcaster, to march.

Mayor Bill de Blasio, who attended the Mass, boycotted the parade because more groups were not allowed to participate. He boycotted the event last year when he was newly elected to head the city.

This year, an estimated 2 million spectators turn out to watch the New York parade and about 250,000 people marched in this year’s parade.

Other U.S. cities’ parades may not be as old or as big, but they are still major events in places like Atlanta and Savannah, Georgia, New Orleans, Boston, Chicago, Los Angeles and San Diego.

“I’m as radiant as the sun, so thanks be to God for the honor and the joy,” Cardinal Dolan told CBS New York about his duties as grand marshal.

Last September, the parade’s organizers announced the cardinal would be grand marshal and also said a gay organization would be allowed to participate in 2015.

Cardinal Dolan in a statement at the time said he was honored to lead the parade and also said it was not up to him to decide who would march.

“The St. Patrick’s Day Parade Committee continues to have my confidence and support,” he said. “Neither my predecessors as archbishop of New York nor I have ever determined who would or would not march in this parade — or any of the other parades that march along Fifth Avenue, for that matter — but have always appreciated the cooperation of parade organizers in keeping the parade close to its Catholic heritage.” 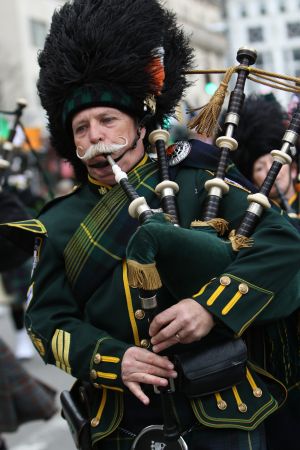 He said he hoped “the parade would continue to be a source of unity for all of us.”

Among critics of this year’s parade was Bill Donohue, president of the Catholic League for Religious and Civil Rights, who pulled his group from the event because a pro-life group was not allowed to march under its own banner, like the gay group was permitted to do.

In an email to Catholic News Service March 19, he said that during his 20-year association with the parade committee, “I defended the decision to exclude a gay group, saying that parade organizers refuse to allow any advocacy group to march under its own banner, including pro-life groups.”

In Boston, the decision by parade organizers to allow two gay groups to march in that city’s March 15 parade riled the head of the Catholic Action League of Massachusetts said that including gay rights groups in the parade there dishonored St. Patrick in “historically Catholic South Boston.”

“A parade in honor of a Catholic saint was used to promote public acceptance of behaviors unequivocally condemned by the Catholic religion,” said the league’s executive director, C.J. Doyle.

The two groups which marched this year were Boston Pride, a gay equality group, and OutVets, which honors lesbian, gay, bisexual and transgender military veterans.

According to Doyle, the groups have “zero interest in the ancient Catholic culture of Ireland and her patron saint” and “express pride in rejecting Catholic morality.” He said the two groups also consider the church’s moral code “bigotry and prejudice.”

The Boston Archdiocese had a special noon St. Patrick’s Day Mass at the Cathedral of the Holy Cross March 17, celebrated by Auxiliary Bishop Robert F. Hennessey. The homilist was Msgr. Liam Bergin, a professor of theology at Boston College and a native of County Laois, Ireland. 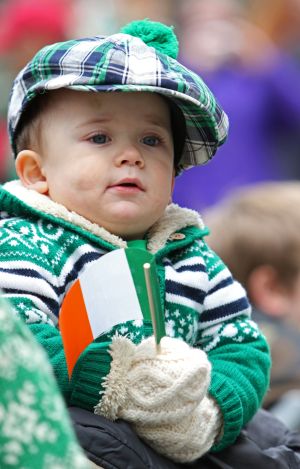 “The archdiocese looks forward to celebrating the patron saint of this local church every year. St. Patrick is a great intercessor, a model of evangelization, and held dear especially by the Irish Catholic community in Boston and beyond,” said Father Jonathan Gaspar, co-director for the Office of Worship and Spiritual Life.

In his St. Patrick’s Day message and blessing, Boston Cardinal Sean P. O’Malley said the day was “a time to celebrate our pride in our heritage, grateful to our ancestors who with great courage came to these shores and made a new life in America. We are grateful for our Catholic faith that came to our ancestors through the ministry” of St. Patrick.

The saint “had a great love for the poor and saw evangelization as his No. 1 priority. … He was a man who remained strong in his faith, even in the midst of hard times and adversity,” the cardinal said. “As a slave, he never lost hope — and as a bishop, when he was rejected because of his preaching of the Gospel, he never gave up. He kept his eyes fixed on Jesus, and he teaches us to do the same!”

In Virginia, a regional Knights of Columbus council in Norfolk was criticized for asking Gov. Terry McAuliffe to be the grand marshal of the March 14 parade. McAuliffe, a Catholic who supports keeping abortion legal and backs same-sex marriage, accepted, which prompted a rebuke from the state’s Catholic bishops.

“It is an erroneous and serious mistake in judgment for any Catholic organization to grant awards, honors and platforms to any public person who clearly acts in defiance to Catholic teaching,” said Bishop Francis X. DiLorenzo of Richmond and Bishop Paul S. Loverde of Arlington, who is state chaplain of the Virginia State Council of the Knights of Columbus.

“While one must always respect the Office of the Governor and the person holding that office, and dialogue should be fostered, one cannot deny that the governor has made public statements in opposition to the moral teaching of the Catholic Church on issues pertaining to the dignity of human life and marriage,” they said.

Catholic teaching upholds the traditional definition of marriage between one man and one woman and says that any sexual activity outside of marriage is sinful. The church also teaches that homosexual attraction itself is not sinful and that homosexual people “must be accepted with respect, compassion and sensitivity.”

“The Knights of Columbus are called to live out and uphold the truths of our Catholic faith. As we go forward, we are confident that every council of Knights of Columbus within the commonwealth of Virginia will carefully weigh future invitations and selections in light of the fullness of church teaching.”