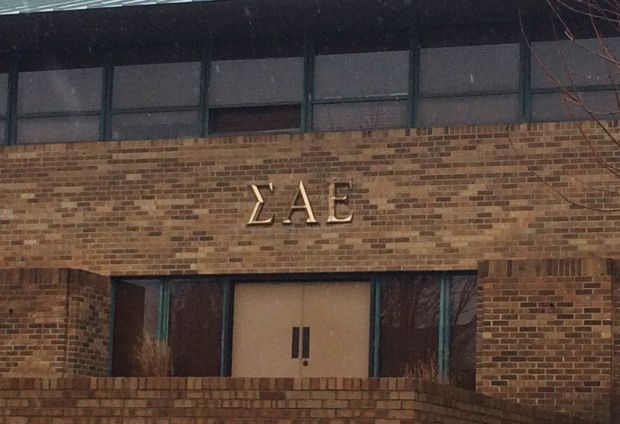 The Sigma Alpha Epsilon fraternity house is seen at the University of Oklahoma in Norman, Oklahoma, March 9. A graduate of Jesuit College Preparatory School in Dallas has been identified as one of the students leading a racist chant on a party bus. (CNS photo/ Heide Brandes, Reuters)

DALLAS (CNS) — Dallas Catholic officials quickly denounced the now infamous viral video that captured University of Oklahoma fraternity members in a racist chant, saying that the action of a recent Jesuit College Preparatory School of Dallas graduate seen in the video was “vile and repulsive.”

The actions and reactions since the making of the video and its release have been swift, with the University of Oklahoma in Norman severing its ties with the local Sigma Alpha Epsilon fraternity and ordering its house shuttered. The national SAE fraternity also severed its ties with the local group and the university expelled two students who led the chants on the video, with officials saying others could face appropriate disciplinary actions.

Rallies and prayer vigils were held on campus, and there wide condemnation across the country over the students’ behavior. There’s been an apology from one student and from the family of another, both from Dallas, for their participation and actions in the video.

Parker Rice — a 2014 graduate of the all-boys Jesuit high school in Dallas and identified as one of two students seen in a nine-second video in which members of the local chapter of SAE chanted a racist tune on a bus March 7 — issued a statement March 10 through his father, apologizing for his participation in the video.

“It was wrong and reckless. I made a horrible mistake by joining into the singing and encouraging others to do the same,” the 19-year-old former student said.

“I know everyone wants to know why or how this happened. I admit it likely was fueled by alcohol consumed at the house before the bus trip, but that’s not an excuse,” he said. “Yes, the song was taught to us, but that too doesn’t work as an explanation. It’s more important to acknowledge what I did and what I didn’t do.

“I didn’t say no, and I clearly dismissed an important value I learned at my beloved high school, Dallas Jesuit,” he said. “We were taught to be ‘Men for Others.’ I failed in that regard, and in those moments, I also completely ignored the core values and ethics I learned from my parents and others.”

Dallas Bishop Kevin J. Farrell said that he was saddened by the students’ actions on the video.

“Certainly, I am extremely saddened that any young person could express such vile, repulsive sentiments,” he said. “To learn that a graduate of a fine school such as Jesuit is involved causes even more anguish and great confusion for all who know the great tradition of service to others that is the school’s cornerstone.”

In 1954, Jesuit College Preparatory School in Dallas, a private Catholic high school operating in the Diocese of Dallas, was the first school in Dallas to integrate.

After the video posting was made public March 8, the university’s president, David Boren, severed all ties between the university and the local fraternity and ordered the SAE house shut down by midnight March 10. On that day, he also announced that he had expelled two students for their leadership roles that “had created a hostile learning environment for others.” University officials declined to identify the students.

“I have emphasized that there is zero tolerance for this kind of threatening racist behavior at the University of Oklahoma,” Boren said in a statement. “I hope that the entire nation will join us in having zero tolerance of such racism when it raises its ugly head in other situations across our country.”

The racist chant and posting of the video came on the same weekend that thousands gathered in Madison, Wisconsin, to protest the shooting of an unarmed African-American teenager by a white policeman. On the same weekend, thousands more gathered in Selma, Alabama, to commemorate the 50th anniversary of the crossing of a bridge during which civil rights advocates were beaten by law enforcement officials in an event that has become known as “Bloody Sunday.”

The SAE racist chant sung to the tune of “If You’re Happy and You Know It” was recorded on a smartphone while the fraternity members and their dates were on a bus March 7. The video clip was sent to “Unheard,” a group of African-American students at the university seeking change on campus. The group then posted the video online.

In the video, those on the bus were dressed in formal attire and were chanting.

Hundreds of university students, faculty and staff have gathered on campus in prayer and rallies since the release of the racist chant video while administrators have been dealing with disciplining the fraternity and its members. The national SAE organization also severed its ties with the local organization.

Dallas Jesuit President Mike Earsing issued a statement via social media March 10 denouncing the chant and the former student, a football player during his time at Jesuit.

“I am appalled by the actions in the video and extremely hurt by the pain this has caused our community,” he said. “It is unconscionable and very sad that in 2015 we still live in a society where this type of bigotry and racism takes place.”

No references to the student could be found on the Jesuit school’s website or social media pages and several social media accounts linked to him or his family had been deleted March 10.

In his statement, Rice said he was concerned about his fraternity friends on campus and that he and his family were unable to be at their home because of threatening calls and talk on social media.

“For me, this is a devastating lesson and I am seeking guidance on how I can learn from this and make sure it never happens again,” he said.

Bishop Farrell asked for prayers and to use the incident to educate others about Christianity.

“I pray that all of us as individuals, parents, educators and students will use this distressing and disgusting incident as an opportunity to remember the basic principle of Christianity — that all people are created in the image and likeness of God and all people deserve our utmost respect and dignity,” he said.

Sedeno is executive editor of The Texas Catholic and Revista Catolica, the English- and Spanish-language newspapers of the Diocese of Dallas.

NEXT: Cardinal Egan’s ‘pearl of great price’ described as his faith in Jesus