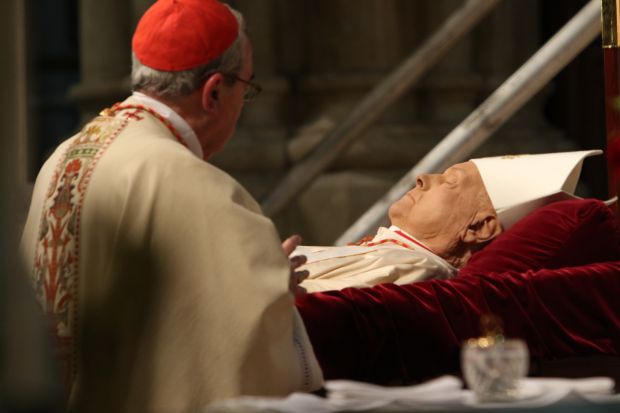 Cardinal Justin Rigali, retired archbishop of Philadelphia, pauses while processing past the body of Cardinal Edward M. Egan at the beginning of a vigil Mass for Cardinal Egan at St. Patrick's Cathedral in New York City March 9. (CNS photo/Gregory A. Shemitz)

Cardinal Egan died March 5 at age 82. He was the archbishop of New York from 2000 to 2009 and was the first to retire from the position.

“His ‘pearl of great price’ was not his erudition, his love of music and art, his renown in canon law, his administrative acumen or distinctive preaching, his bishop’s ring or cardinal’s hat, but his faith in Jesus Christ,” New York Cardinal Timothy M. Dolan told the 2,500 people gathered to mourn his predecessor.

Cardinal Egan loved the church, the place where he met, learned, served and was united to Jesus, Cardinal Dolan said. “I call him a churchman, a term that cannot be reduced to describing a man who prefers brick-and-mortar, ledgers, and an aloof institution, but a man who sees in the church Jesus Christ, his lord and savior, alive in teaching, serving and sanctifying,” the cardinal said.

The immense bronze doors of St. Patrick’s swung open to begin a processional that included Cardinal Dolan, seven other cardinals and more than 30 bishops, 250 priests, 24 deacons and 100 seminarians. They were met by an honor guard of New York City police and firefighters and members of the Knights of Malta, Knights of the Holy Sepulchre and Knights of Columbus.

As the concelebrants filed up the aisle and past Cardinal Egan’s casket, the skirl of a bagpiper on Fifth Avenue mixed with the traditional organ and vocal music from the soaring choir loft and briefly threatened to drown it out.

The careful hierarchy of seating in the cathedral included reserved spots for Cardinal’s Egan’s family, trustees of archdiocesan groups, women and men religious, employees of the archdiocese, the general public and the media.

Members of Cardinal Egan’s family delivered the first and second readings and the general intercessions, and brought the offertory gifts to the altar. His great-nephew, Brian Hayes, eulogized the late cardinal as “a steadfast bastion of all that is good.” Addressing himself to “the New York side of our family,” Hayes said, “You meant the world to him.”

Cardinal Dolan said he “snuck” into the church the night before the funeral to again offer prayers for Cardinal Egan. The church was empty except for the police honor guard standing watch over the cardinal’s casket, he said.

“As I gazed upon his body … I saw on him in the casket what he treasured most,” Cardinal Dolan said. “On his chest was the cross, in whose victory we trust he now shares; in his hands was his rosary, reminding me of his prayers and his trust in the mother of Jesus; on his finger the bishop’s ring, telling us that he was married to the bride of Christ, the church; beneath his head was his pallium, yoking him to the successor of St. Peter in Rome; and all around him were the vestments each priest wears for Mass, his most sacred duty. Those were the essentials.”

At the end of Mass, pallbearers carrying the mahogany coffin on their shoulders led a procession of cardinals, bishops and Cardinal Egan’s family around the cathedral to bursts of spontaneous applause. They squeezed through passages narrowed by scaffolding from the almost-complete, multiyear restoration of the church and arrived at the crypt under the main altar.

There, Cardinal Egan was entombed alongside his predecessors.

The locked crypt now holds the remains of 14 people, including Archbishop Fulton Sheen, Pierre Toussaint and Msgr. Michael Lavelle, who for 60 years was rector of the cathedral. In its present configuration of three upright ranks of seven tombs each, it has a capacity of 21.

George Borrero, managing director of the trustees of St. Patrick’s Cathedral, told Catholic News Service the blank marble cover was removed from Cardinal Egan’s designated crypt after his death. A monument company engraved the stone with the cardinal’s name, dates of his life and tenure as archbishop, and his coat of arms, featuring the motto, “In the Holiness of Truth.”

While the stonecutters worked, pallbearers practiced maneuvering a coffin down the low-ceilinged steps and made sure the 21st-century casket would fit into the 19th-century crypt.

When a CNS reporter visited the crypt with Borrero after the funeral, the freshly engraved 250-pound slab had been sealed into place.

Bishop Sullivan said Cardinal Egan’s daily hourlong, motionless, morning recollection before the tabernacle “was the juice of his priestly ministry. It is what fired the rest of his day.”

He said the cardinal prepared his homilies meticulously and used his pulpit to lift up, encourage and “lead all to the mercy and infinite understanding of God.” Bishop Sullivan said Cardinal Egan was “always the priest, the gentleman, even when he was angry, impeccable in dress, speech and attention to detail.”

He said detail was akin to respect and the cardinal held himself and others to a standard of perfection because “that is what God’s people deserve from us.” 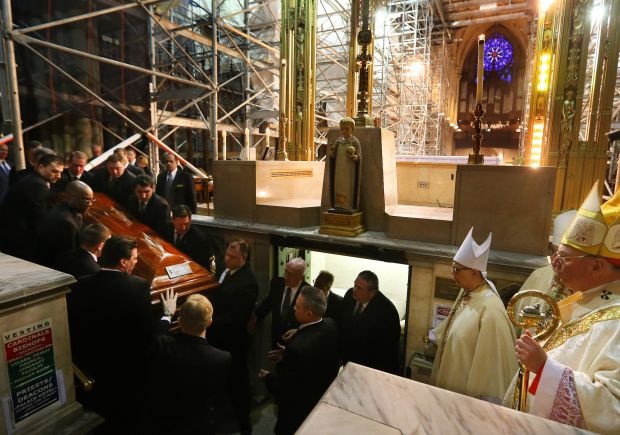