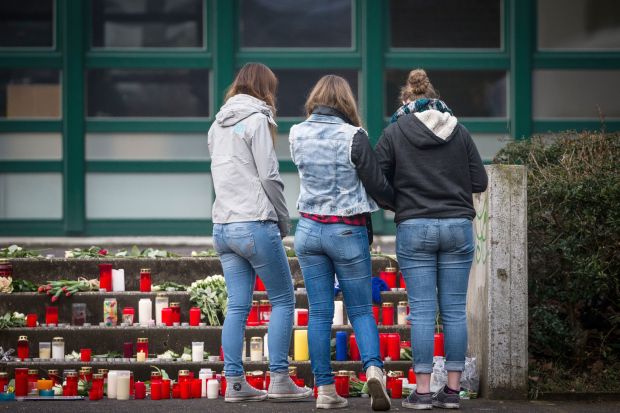 Students pause in front of a makeshift memorial on the steps of Joseph Koenig High School in Haltern am See, Germany, March 24. Sixteen students and two teachers from the school were among the 150 people killed in the crash of a Germanwings Airbus A320 that day in the French Alps. (CNS photo/Rolf Vennenbernd, EPA)

ARLINGTON, Va. (CNS) — A mother and daughter from Virginia who perished in the French Alps plane crash were remembered by fellow Catholic parishioners as “wonderful people” who were active members of Sacred Heart Church in Manassas.

Yvonne Selke and her daughter, Emily, were two of the three Americans killed in the March 24 crash of an Airbus jet March 24. The identity of the third American has not yet been released.

Raymond Selke of Nokesville confirmed his wife and daughter were among the 150 people who died on the Germanwings flight from Spain to Germany.

“They will obviously be very missed,” Raymond said in a brief phone interview March 25 with the Arlington Catholic Herald, diocesan newspaper. “There is a huge gap, a huge hole that will be difficult to fill.”

Too devastated to provide additional information, the family released a statement: “Our entire family is deeply saddened by the losses of Yvonne and Emily Selke, two wonderful, caring, amazing people who meant so much to so many,” it said. “At this difficult time we respectfully ask for privacy and your prayers.”

According to Father Michael J. Bazan, pastor of Sacred Heart, the mother and daughter were committed to their parish and faith. He said parishioners are lifting up countless prayers on behalf of the Selke family.

“They both were wonderful people,” said Kathleen Burr, director of faith formation at Sacred Heart. “They were always here, always wanted to help.”

A parishioner of Sacred Heart since 1993, Yvonne was a volunteer in the faith formation program.

She had helped in the parish library and was a “prayer listener.” Children from the parish memorized prayers, and Yvonne would listen as they recited them, said Burr, adding that she was “a gentle and kind woman.”

Emily attended Woodbridge Senior High School and was a 2013 honors graduate of Drexel University in Philadelphia, where she majored in music industry.

She sang in the Sacred Heart children’s choir when she was young and was a “lovely, bright girl,” said E.J. Cochran, music director.

Emily was confirmed at the parish in 2006 and was a member of the middle school social service club. She also participated in a parish work camp.

While at Drexel, Emily served as vice president of the school’s Zeta chapter of the Gamma Sigma Sigma sorority.

“Zeta is deeply mourning the loss of (a) friend and alumna,” said Alyse Weaver, president of the Zeta chapter. A message on the sorority’s Facebook page said Emily “embodied the spirit of Gamma Sigma Sigma. As a person and friend, Emily always put others before herself and cared deeply for all those in her life.”

Emily’s LinkedIn profile said she was a community manager at Alexandria’s Carr Workplaces and had previously worked as a manager with the Pittsburgh Fringe Festival and as a performing arts programming assistant for the Lorton Art Foundation. She also was a lifetime member of the Girl Scouts.

Yvonne was a contract employee with Booz Allen Hamilton in Washington who worked on-site in support of the National Geospatial-Intelligence Agency.

“Every death is a tragedy, but seldom does a death affect us all so directly and unexpectedly,” said Robert Cardillo, the intelligence agency’s director, in a statement. “All of us offer our deepest condolences and will keep her family and her colleagues in our thoughts.”