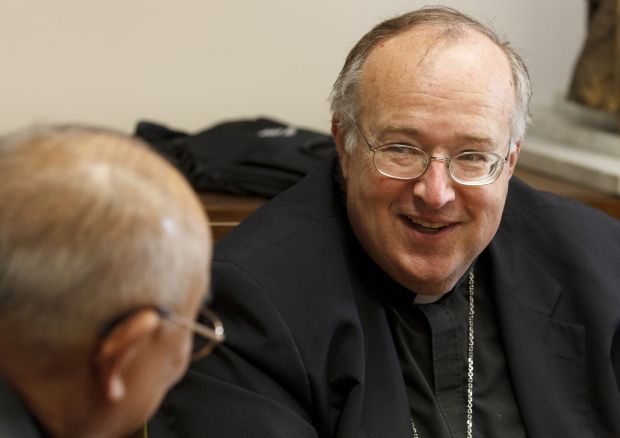 Pope Francis has appointed Bishop Robert W. McElroy, 61, bishop of the Diocese of San Diego. Bishop McElroy has served as an auxiliary bishop of San Francisco since 2010. He succeeds the late Bishop Cirilo Flores, who died September 6, 2014. Bishop McElroy is pictured in a 2012 photo. (CNS/Paul Haring)

WASHINGTON (CNS) — Auxiliary Bishop Robert W. McElroy of San Francisco has been named to head the Diocese of San Diego by Pope Francis.

The appointment was announced in Washington March 3 by Archbishop Carlo Maria Vigano, apostolic nuncio to the United States.

Bishop McElroy, 61, is a native of San Francisco who has spent most of his life in the Bay Area. He has been an auxiliary bishop since 2010.

He will be installed as the sixth bishop of San Diego during an April 15 Mass at St. Therese of Carmel Church. He succeeds Bishop Cirilo B. Flores, who died Sept. 6, 2014.

“Bishop McElroy is exemplary in his outreach to many groups and communities in the archdiocese and we are all grateful for his wise advice and guidance to people and parishes in the archdiocese,” said a statement from San Francisco Archbishop Salvatore J. Cordileone.

He said San Diego’s location as a major metropolis on the U.S.-Mexico border across from another major metropolis. Tijuana, “presents distinctive challenges and opportunities.”

Bishop McElroy’s “proven track record of outreach to the poor and marginalized, along with his ability to understand and articulate the complexities involved,” Archbishop Cordileone said, “will serve him well in responding to Catholics of the Diocese of San Diego, as he builds upon the many graces they have received from God and helps Catholics confront their needs with hope and confidence in the Lord.”

When he was named an auxiliary for San Francisco, Bishop McElroy had been pastor of St. Gregory Parish in San Mateo, California, for 14 years. Before that he was vicar general for the San Francisco Archdiocese, from 1995 to 1997. He was named a monsignor in 1996.

He is author of “The Search for an American Public Theology: The Contribution of John Courtney Murray,” Paulist Press, 1989; and “Morality and American Foreign Policy: The Role of Ethics in International Affairs,” Princeton University Press, 1992. He also has been published in journals and America magazine, a weekly Jesuit publication.

Robert Walter McElroy was born Feb. 5, 1954, in San Francisco. He grew up in San Mateo County. His family resided in Our Lady of Mercy Parish in Daly City and Our Lady of Angels Parish in Burlingame.

He was ordained a priest for San Francisco April 12, 1980, at St. Mary’s Cathedral by Archbishop John R. Quinn.

As a young priest, he was parochial vicar at St. Cecilia Parish in San Francisco and at St. Pius in Redwood City. He was secretary to Archbishop Quinn from 1982 to 1985.

The San Diego Diocese covers more than 8,800 square miles in Southern California. Out of a total population of about 3.2 million people, just under 1 million, or 31 percent, are Catholic.

NEXT: People of faith urged to make home ‘the way you want the world to look’