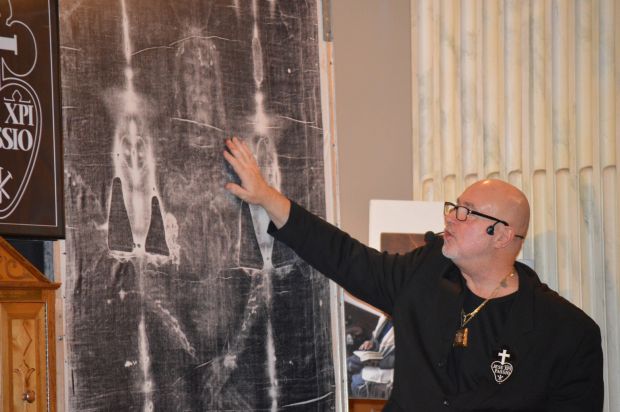 Donald Nohs points to distinguishing marks on a negative image of the Shroud of Turin during a Feb. 4 presentation at St. Paul of the Cross Monastery in Pittsburgh. (CNS photo/John Franko, Pittsburgh Catholic)

PITTSBURGH (CNS) — Donald Nohs, who is an expert on the Shroud of Turin, widely believed to be the burial cloth of Jesus, talked to a Pittsburgh audience about the evidence of authenticity for the shroud.

Jesus’ passion, Nohs noted, was much more than a physical suffering. It was the humiliation and embarrassment of being scourged in the nude in front of his mother and friends. The suffering Mary endured, he said, is why she is our greatest intercessor in heaven. He asked the audience to bring Mary into their hearts and walk with her through the presentation.

“There was no end to the humiliation,” he said. “The embarrassment. The physical pain. No end.”

Nohs presented “Discovering Jesus in His Holy Shroud” at St. Paul of the Cross Monastery on Pittsburgh’s South Side to a capacity audience of about 550 people.

Nohs, director general of the Confraternity of the Passion International and president of the Holy Face of Jesus, is one of the world’s leading authorities on the Shroud of Turin. He has studied the shroud for more than 50 years.

The shroud’s existence has been documented for centuries, but the invention of photography in the 19th century revealed that the image of a crucified man was actually a negative image.

Nohs’ presentation included authentic replicas of the shroud that present it in both positive and negative images. It is believed to be the largest mobile shroud display in the U.S.

“What a good and loving God we have,” Nohs told the audience. “This is the message of his shroud. To prepare and usher in the kingdom of God.”

The negative image of the shroud provided a much more detailed image of the crucified Christ. Nohs said it spoke of a man between 5-foot-10 to 5-foot-11 and approximately 175 pounds. He was lean and very well built, and was in good physical condition.

A dorsal image of the shroud, he noted, revealed a long pony tail that extended to the center of the back. It was a trait of a Jewish male from Galilee to wear his hair like that, he said.

Nohs used members of the audience to demonstrate how the shroud conformed to the human body. He showed how a cloth folded around the head wounds, and how it picked up blood and matched the shroud image. And blood around the beard, he noted, showed the depth of his suffering.

He noted that the burial shroud influenced the cloths that are used on the altar.

The presentation included authentic replicas of instruments used in the crucifixion, such as a Roman flagrum, or whip, as well as nails, a detailed crown of thorns, a spear and a cross beam from the cross Christ carried.

Nohs demonstrated how the whip marks were reflected in the shroud, and he noted scourge marks on the body. He also spoke of the deep lacerations, which were believed to be the result of Jesus being forced to sit on shards of glass.

In addition, he noted the 50 to 75 puncture wounds around the scalp that were caused by the crown of thorns, as well as a swollen lower lip punctured by a thorn.

Nohs strapped a cross beam across his back to demonstrate Christ’s 650-yard journey to Golgotha. He pointed out that Christ carried a rough-cut timber cross beam that weighed between 110-120 pounds. The shroud, he said, reflected splinters in the back of the neck and gouges in the shoulders from the cross.

He used the first-century Roman roofing nails to demonstrate how they placed one through each wrist, and added two more through the feet. In order to line up pilot holes for the cross, he noted, they pulled on Christ’s arm so hard with a rope that they popped his right shoulder right out of its joint.

“What pain my brothers and sisters,” he said. “What pain Jesus endured for us.”

Nohs also demonstrated how the spear was used to penetrate through the fifth and sixth ribs of Christ, severing his heart and almost coming out of his back.

He became emotional when he described signs within the context of the Mass that signify Christ’s intention to return.

At the end of the presentation, members of the audience had an opportunity to venerate a relic of the shroud.

Nohs said his ministry is to help people touch Jesus physically, and he called his work a response to St. John Paul II’s call to “evangelize the world with this cloth.”

“Lives are changed,” he said. “This is also a healing and deliverance ministry. There have been conversions, deliverances, spiritual and physical healings.”

Nohs added, “This encounter with Jesus is not a casual encounter. It is necessary for today’s world.”