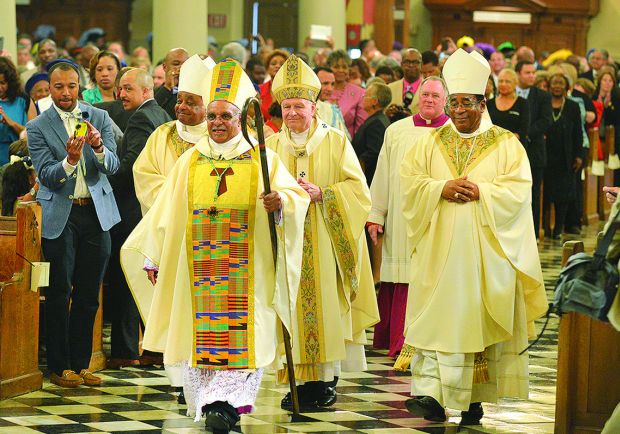 NEW ORLEANS (CNS) — Let the record show that never before in the nearly 300-year history of St. Louis Cathedral have Catholics seen a dancing bishop.

But when Bishop Fernand “Ferd” Cheri III, a Franciscan priest and native son, made his first remarks to the nearly 1,000 people gathered for his ordination as auxiliary bishop March 23, the hometown boy in him couldn’t resist breaking into several spirituals and even moving a few body parts.

Bishop Cheri, 63, spoke briefly after giving Communion to his 87-year-old mother, Gladys, seated proudly in the front pew just six weeks after she had fallen and broken her right hip.

Gladys Cheri’s medical condition hardly fazed her as she jumped to her feet and began twirling a colorful “second line” umbrella — a local custom at celebrations — as Bishop Cheri broke out into song during his remarks before the final blessing.

All of the Cheri ladies — the bishop’s four sisters and his mother — were dressed in red, the episcopal color. Bishop Cheri’s brother Richard, a longtime choir leader, watched from the balcony as he directed the Archdiocese of New Orleans Gospel Choir, established 31 years ago by then-Father Cheri.

“I feel like King David felt when the ark of God was being brought into Jerusalem,” Bishop Cheri said, smiling broadly after being ordained the 11th auxiliary bishop of New Orleans by Archbishop Gregory M. Aymond, who heads the archdiocese. He joins the ranks of about a dozen U.S. black Catholic bishops.

Two of those bishops, Archbishop Wilton D. Gregory of Atlanta and Bishop J. Terry Steib of Memphis, Tennessee, were co-consecrators.

“Like David, I’m so overjoyed by God’s blessings and God’s grace and God’s mercy. I feel like I have to give a testimony,” Bishop Cheri said. 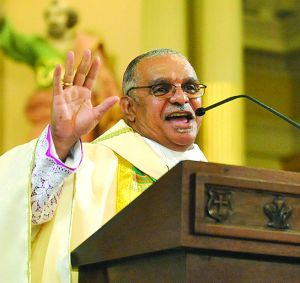 That drew murmurs from the knowing crowd, many of whom had heard Bishop Cheri speak before in their churches or at Gospel-based revivals.

An organist began playing a few notes, indicating a joyful noise was about to erupt.

In his remarks, Bishop Cheri used the lyrics of some of his favorite spirituals to express what he was feeling inside. He was ordained as a priest for the Archdiocese of New Orleans in 1978 before transferring to the Franciscans in 1992. His most recent appointment was as director of campus ministry at Quincy University in Illinois, a Franciscan university.

Citing the lyrics of another spiritual, Bishop Cheri said he wanted to give thanks to the many people who had lifted him up during the toughest moments of his seminary and priestly life. When Bishop Cheri faced several racially charged incidents, he said God allowed him to persevere in his vocation by bringing people into his life, especially members of the National Black Catholic Clergy Caucus, who told him personal stories about what they had endured.

“I want to give thanks to so many who have taught me and ‘brought me along a mighty long way,'” Bishop Cheri said.

After Bishop Cheri returned to his chair to extended applause, Archbishop Aymond turned to the congregation and said: “I think this afternoon we have been to church.”

Earlier, in his homily before the rite of ordination, Archbishop Aymond looked at his fellow Notre Dame Seminary alumnus and said: “Ferd, welcome home!”

From one hometown priest to another, it was a touching, fraternal moment.

Archbishop Aymond thanked Gladys Cheri and her late husband, Fernand Jr., for rearing seven children and helping see to it that all “were brought up in the faith.”

All seven Cheri children attended Catholic elementary and high schools, and all seven earned college degrees while Fernand Jr. made ends meet for his family on a postal carrier’s salary.

“Ferd, we also thank you for your faith and your priestly ministry over the years and for faithfully answering God’s call to serve the church as a servant leader,” Archbishop Aymond said.

Archbishop Aymond also noted that Bishop Cheri followed in the footsteps of the late Auxiliary Bishop Harold R. Perry of New Orleans, who in 1966 became the first African-American Catholic bishop in the United States in the 20th century.

“You bring the richness of the African-American tradition to our church,” Archbishop Aymond said. “Bishop Perry led a prophetic life. Ferd, you have the privilege to walk in his footsteps.”

Archbishop Aymond explained three of the outward signs of the bishop’s office: the ring as a symbol of “unconditional fidelity to Christ and his church”; the miter, a bishop’s headpiece, as a sign of the “call to holiness”; and the crozier, or pastoral staff, representing “Christ the Good Shepherd in whose name he will lead.”

“Ferd, sometimes you will find yourself leaning on the pastoral staff acknowledging your dependence on Jesus, especially when you bear the burdens of God’s people,” Archbishop Aymond said. “When you lean on the crozier, be reminded of your motto, ‘God is My Strength.'”

Since so much is expected of a bishop, he said, it may seem like an impossible burden.

“Can you do all of this?” the archbishop asked. “Yes, if you stay close to Jesus the Good Shepherd. As you follow him, you will be able to lead others.

“Ferd, we are here today to pray with you and support you. We also promise to be there tomorrow as you fulfill your important ministry as bishop of the church.”