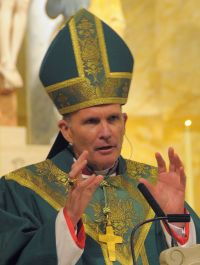 “I hope to be at the altar, standing alone, saying Mass on Palm Sunday,” he said in a video interview released on diocesan media Jan. 16.

That hope will be realized March 29 when Bishop O’Connell will celebrate the 10:30 a.m. Mass for Palm Sunday at St. Mary of the Assumption Cathedral in Trenton. It will be three months to the date from his surgery in Robert Wood Johnson Hospital in Hamilton, necessitated by life-threatening bone and blood infections.

During the months of recovery and rehabilitation that followed, Bishop O’Connell never lost sight of his desire to return to public ministry in time for the start of Holy Week.

In a recent interview with The Monitor, Trenton’s diocesan newspaper, he said: “Before and after my return home, the primary focus of attention has been on rehabilitation therapy at St. Lawrence Rehabilitation Center in Lawrenceville. … Three times a week, for anywhere from one to three hours, therapists worked with me, teaching me to walk again with an artificial left leg.”

All that work and determination has led him to a good place. “I feel better than I have in years,” he gratefully noted.

The bishop praised the St. Lawrence facility, calling it a place “where miracles happen.”

“The staff there is outstanding. I recommend the place to anyone in need of physical therapy,” he said.

While stressing that the people who helped him along the way were “too many to mention by name,” Bishop O’Connell did praise the medical and nursing staff at Robert Wood Johnson. He also recalled the countless individuals in the diocese who sent cards, emails and tokens of their love and support.

The bishop expressed appreciation for “the priests who encouraged me, and especially the vicars who filled in for me at parish sacraments and events; the parishioners, especially parents, who were very understanding that I could not be present with them for special occasions; the kids in our Catholic schools and religious education programs who sent thousands of cards and messages. Donovan Catholic High School in Toms River sent me a get-well video — ‘Scenes From Your Sheep’ — each week.”

He also credited his staff for their support and his secretary, Deacon Jason Parzynski, who was a vital support at home and at work. “Every day, I praise and thank God for all these people who showed such love and attention,” said Bishop O’Connell.

He was grateful to his own brothers for their regular calls and visits, but also for handling a difficult transition involving their mother without his assistance. One of the most difficult things he experienced in the last three months, he said, was “my mother’s moving into a nursing home without my being able to help.”

“I found my total dependence on others a lesson in humility,” he continued. “I had to learn to slow down and pull back a bit, which is not my nature. I missed administering confirmation, preaching in churches and greeting parishioners more than anything else, so that was a real sacrifice my situation imposed.”

Poised to embark on an ambitious Holy Week schedule, with not only Palm Sunday, but the chrism Mass and multiple Masses and services throughout the Easter triduum, Bishop O’Connell is ready to put this recent health challenge in the rear view mirror.

“I will return to full, active, public ministry as bishop, with God’s grace,” he said. “I do not intend to focus more attention on my own circumstances but, rather, to be there for the priests and people of this local church, ‘ministrare non ministrari,’ ‘to serve and not to be served.'”

Among those he wants to help are individuals who are struggling with health-related burdens.

“I want to reach out to all those with disabilities and to all those suffering with any illness. Place your faith and trust in God. Hand yourself over to his ever-present love and care,” he said.

“The holy Scriptures remind us ‘nothing is impossible with God.’ Don’t give up and don’t give in to discouragement of self-pity — these are really the only ‘terminal diseases’ that can hold you back.”

“Believe that with all your heart and mind and soul,” Bishop O’Connell said.

Bennett is associate publisher of The Monitor, newspaper of the Diocese of Trenton.

NEXT: Archbishop: ‘Use energy’ of Selma anniversary to heal today’s divisions