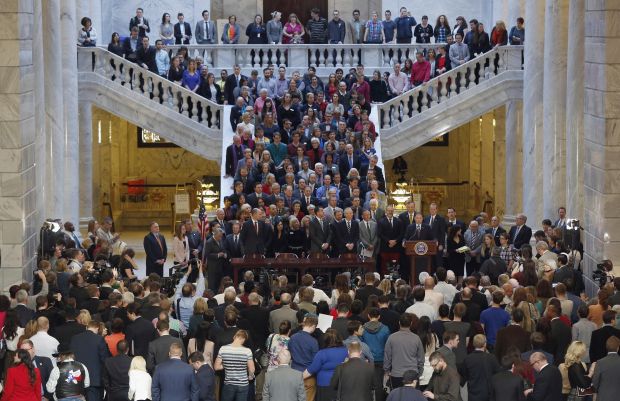 The measure, signed into law by Republican Gov. Gary Herbert March 12 in the Capitol rotunda, adds sexual orientation and gender identity to the list of protected classes against whom landlords and employers may not discriminate.

Jean Hill, government liaison for the Catholic Diocese of Salt Lake City, said the bill “represents many hours of work (among) leaders of the Church of Jesus Christ of Latter-day Saints and LGBT advocacy groups to create a state law that strikes a fair and just balance between providing for these basic needs and protecting the rights of people of faith to exercise their beliefs.”

The bill exempts faith-based organizations such as schools, hospitals and organizations and also protects an individual’s right to express his or her beliefs in the workplace as long as that individual is not harassing others.

Mormon leaders said the church still opposes same-sex marriage, but in a recent interview with Fox 13, Elder D. Todd Christofferson said the anti-discrimination measure was an opportunity to “balance competing interests and rights respectfully and find a solution.”

Some church leaders said Mormons have been branded as bigots and “publicly intimidated and retaliated against” for giving their religious views on issues. The law also protects a Mormon physician, for example, from being forced to provide artificial insemination for a lesbian couple.

According to Hill, the diocese’s other top legislative issues for this session included health insurance for low-income individuals and reform of the criminal justice system.

“Unfortunately, the poor and marginalized did not always fare well in the process,” she said, writing in the Intermountain Catholic, the diocesan newspaper.

For the past two years, the diocese has advocated for Medicaid expansion under the federal Affordable Care Act, but the legislative session adjourned without coming up with a health care plan. However, the legislative and executive branches agreed to work out a solution to the impasse by July 31, which will be taken up by a special session of the Legislature.

Lawmakers passed a bill to address Utah’s recidivism rate, one of the highest in the nation, by allocating $15 million to pay for substance-abuse and mental-health treatment programs for prisoners.

According to Hill, the measure “enacts 18 different changes to the state’s criminal justice system to better address the needs of people who are involved in the system so they do not return time and again”

“For many, those needs include professional assistance with mental health and substance abuse issues,” she said. “Treatment outcomes for low-risk offenders are usually much better when it occurs outside of a correctional setting.”

On March 10, the state Senate passed a measure to reinstate execution by firing squad for those convicted of capital crimes; the state House had passed it in February. Herbert has not said if he will sign it into law.

Salt Lake City Bishop John C. Wester, writing in the Intermountain Catholic in late February, said the death penalty “in any form is abhorrent. … At its core, the death penalty is repugnant to us because of our firmly held belief that only God can give life and, consequently, only God can rightly take it away.”

“State legislators should have tabled” the firing squad measure, said Hill, but added that the death penalty was included on a legislative resolution of items to study during the interim. The Salt Lake City Diocese will participate in those interim discussions, “and we hope the Legislature will see the detriment the death penalty does to our state’s moral standing,” she added.

NEXT: Catholic advocates push Congress for a budget that protects poor people