With Christians under new attacks by Islamic State, call for help renews 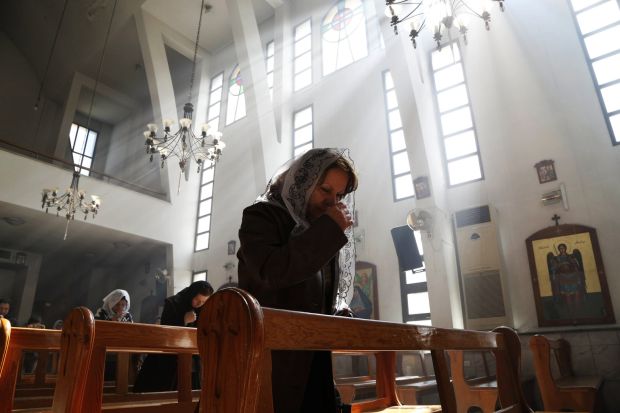 An Assyrian woman prays at a church in Damascus March 1 during a special Mass for Assyrian Christians abducted by Islamic State fighters. (CNS photo/Omar Sanadiki, Reuters)

Syria’s northeast Hassakeh province is emerging as the new battlefield in the fight against extremist group. Analysts say Hassakeh province, which extends like a thumb into neighboring Iraq and Turkey, could become the fault line of a new multifront and lengthy war between Islamic State militants and Christians allied with Kurdish fighters.

“This is a very dangerous situation,” said Bassam Ishak, president of the Syriac National Council of Syria, warning of the major new offensive on Christian villages along the Khabur River.

“The villages on the south side of the river are in the hands of Islamic State militants,” Ishak told CNS.

“They took Tal Nasri, which is very close to Tal Tamar,” Ishak explained. Tal Tamar “is at the crossroads of many highways to Aleppo, Syria’s second biggest city; to Qamishli, to Hassakeh and Ras al-Ain.”

The March attacks follow a raid by Islamic State militants on a cluster of villages along the Khabur River Feb. 23. More than 220 Assyrian Christians residents and other minorities were abducted then.

About 20 Assyrian Christians were later released. And although the apostolic nuncio to Syria, Archbishop Mario Zenari, told the Rome-based missionary news agency AsiaNews that Islamic State militants released 52 abducted Assyrian Christian families without ransom payment March 5 and 6, a priest who talked to church leaders in Hassakeh confirmed March 9 those families were not released.

A statement issued by the Syriac National Council of Syria, the European Syriac Union, and the Christian Coalition for Syria said Islamic State militants seized “all villages on the south bank of the Khabur and several villages on the north bank.”

Catholic News Service obtained a copy of the statement, which warned that the extremist group will “try to cross the Khabur with large numbers of fighters and heavy weapons — vastly stronger than the lightly armed self-defense forces of both Christians and Kurds in the area. Residents reported that the Khabur’s water flow strangely and suddenly dropped sharply on (March 8), although its source is in Turkey.”

Turkey should “restore water flows in the Khabur to make crossing the river harder for (the Islamic State extremists) and reopen its border with Syria so fleeing refugees can reach safety,” it said. There is also an “urgent need for more international humanitarian and military assistance,” it added, saying “1.5 million Christians, Kurds, and other civilians are at risk.”

Although U.S. coalition warplanes aided the Kurdish and Christian fighters by striking some Islamic State positions March 7-8, the statement said that “coalition airstrikes may put the militants off for a day or two but the situation is truly critical.”

“The Khabur River Valley is large and weakly defended in comparison with (Islamic State) armed battalions and heavy equipment. The ratio of fighters is probably 100 to 1,” the statement added.

Some Syriac Orthodox religious leaders in Europe have reportedly urged their congregants to go fight Islamic State militants to save their ancestral homeland.

He told CNS that he was on the Iraqi-Syrian borders where a truck has been sent with relief items, such as medicines, milk and blankets to the Hassakeh province’s displaced Christians.

Father Rifat Bader, speaking on behalf of Jordan’s Catholic community, said prayers were being offered up for the tragic circumstances unfolding in northeastern Syria and throughout the Middle East.

“The suffering is becoming greater not only for Christians, but the region in general. The whole region is on fire,” said Father Bader, who heads the Catholic Center for Studies and Media.

“The persecution of Christians is rising and a human disaster is unfolding. These groups pretend to be Islamic, but are void of religion. They are filled with cruelty and violence destroying our civilization, whether people or stones,” he said, referring to reports that Islamic State militants are looting and destroying renowned ancient archaeological sites.

“Catholics are praying. We can’t talk about the future without a solution,” Father Bader said, urging that “we must support a political solution to end these attacks.”

In Iraq, Chaldean Catholic Patriarch Louis Sako called on the central government and the international community “to act as soon as possible for the protection of innocent civilians and to offer them the necessary assistance in lodging, food and medication.”

The Islamic State “is burning everything: human beings, stones and civilization,” he said in a March 9 statement.

He said thousands of families have been displaced by the fighting, and he called for an emergency meeting of Iraq’s Council of Ministers and the National Assembly deputies “to discuss this situation that threatens to deteriorate from bad to worse.”

“This is obviously a human catastrophe that cannot suffer any silence,” he said.