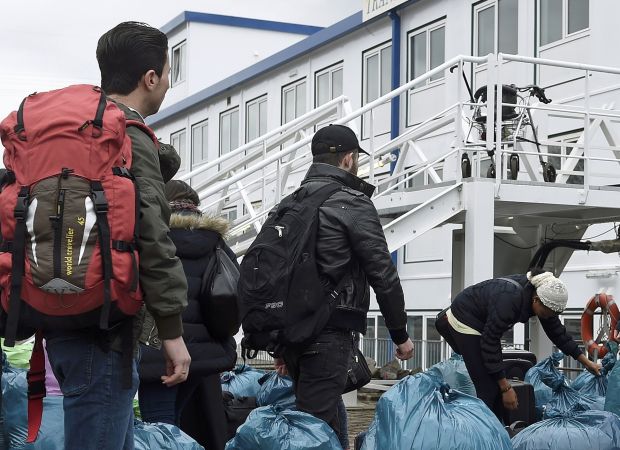 Refugees arrive at a Dutch-owned houseboat in the harbor of Hamburg, Germany, Feb. 26. Some 216 asylum seekers from Syria, Afghanistan, Iran, Iraq, Eritrea and Serbia will live on the boat, which Hamburg authorities are providing as a temporary accommodation. (CNS photo/Fabian Bimmer, Reuters)

WASHINGTON (CNS) — Saying the Syrian refugee crisis has reached a “tipping point,” officials of the U.S. Conference of Catholic Bishops who recently traveled to the Middle East are urging the international community to offer more help.

“Without more international support, we will find Syrians fleeing extremists being turned away and forced back to danger,” said Anastasia Brown, interim executive director for USCCB’s Migration and Refugee Services.

“The global community, led by Europe and the United States, needs to increase its support in order to prevent a humanitarian crisis,” she said in a statement.

There are now nearly 4 million Syrian refugees and countries in the region are no longer able to handle the flow of refugees across their borders, according to the USCCB.

A delegation of USCCB officials visited the region in late 2014 and released a report March 6 titled “Refuge and Hope in the Time of ISIS,” an acronym for the Islamic State. It looks at the plight of Syrians in Turkey, Bulgaria and Greece and the obstacles facing Syrians who are attempting to reach Europe.

It says Syrians find little protection as they travel through Greece and Bulgaria on their way to Europe and cites a U.N. report describing how many refugees “are taking dangerous sea journeys in boats to reach the continent.”

The full report is available at www.usccb.org/about/migration-policy/upload/Refuge-and-Hope-in-the-Time-of-ISIS.pdf. Among recommendations to address the crisis, it lists increased refugee assistance and resettlement.

“Beyond their role as donors, the United States, the EU member states, and other concerned countries should also share the burden by being countries of refuge,” the report says. That means, it says, working with the U.N. High Commissioner for Refugees, Turkey, Bulgaria and Greece “to also facilitate access to asylum, third-country resettlement, and complementary protection outside the region.”

“It was apparent from our trip that the protection space in the region for Syrians is shrinking,” said Matt Wilch, refugee policy adviser for Migration and Refugee Services at the USCCB. “People are becoming more desperate and are attempting dangerous journeys to Europe and beyond.”

The crisis has been especially hard on children, who make up half the total of Syrian refugees. Many of the children are unaccompanied minors.

“The number of unaccompanied children and other vulnerable children from Syria and elsewhere is rising, yet there are few protection mechanisms in place to identify and rescue them from harm,” said Nathalie Lummert, MRS director of special programs. “What we are seeing is an exodus of the next generation in Syria, with little hope for their future.”

Also of grave concern, the delegation said, is the well-being of Assyrian and Chaldean Christians and Yezidis, religious minorities who are targets of extremists in the region.

PREVIOUS: With Christians under new attacks by Islamic State, call for help renews

NEXT: In new interview, pope talks about his safety, politics, virtual relationships