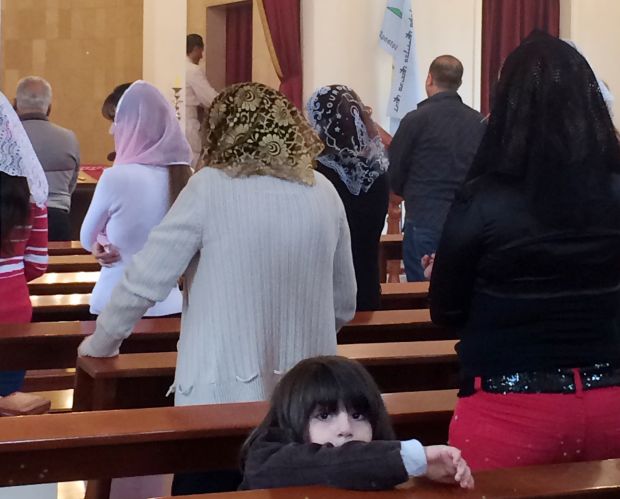 BEIRUT (CNS) — Assyrian Christians from Syria’s besieged Khabur region who fled their homes when the Islamic State seized their villages in February are increasingly seeking refuge in neighboring Lebanon.

As of March 17, the Assyrian Church of the East in Lebanon had registered 50 families from the region, and more are coming into neighboring Lebanon each day.

Michael and Hanna arrived in Lebanon March 11 with their 10-year-old daughter, Elizabeth. They requested that Catholic News Service identify them by pseudonyms to protect their identity, because relatives are among the 300 or so hostages taken by Islamic State in the Feb. 23 rampage on Khabur’s cluster of 35 villages.

So far, Islamic State released about 20 of the kidnapped, but there is no news of the remaining hostages, who include women, children and elderly.

“We have not heard anything,” Michael said. “We’re praying that God will protect them. What else can we do?”

Michael and his family were awakened around 3 a.m. by the thundering of Islamic State militants bombarding nearby villages. They waited a while to determine if the militants would approach their village, Tal Maghas. By 5 a.m., it was clear they had to escape.

“Everyone was terrified and panicking,” Michael said.

The family had time only to grab official documents, not even a change of clothes, before fleeing their home.

More than 3,000 people eventually fled the Khabur region, arriving first at Tel Tamr, about six miles away, then later traveling to Hassakeh and Qamishli. The uprooted villagers sheltered in churches and houses previously abandoned by other Christians, but the couple still did not feel safe.

“We were concerned that Hassakeh would be under siege, too. I was really afraid for my wife and daughter,” Michael said.

He reflected on life before the Syrian conflict, now entering its fifth year.

“In our village, we are simple people,” Michael said. “Just imagine, you live in your own house, you never owned a weapon, you never argue with anyone. We lived in harmony with everyone.”

“Then Daesh came,” Michael said, referring to the Islamic State by its Arabic acronym. “They rob, kill, destroy, burn. Just because we are Christians.”

“We had the best life. It was lush and green,” Michael said of the Khabur area, where most of the residents work in agriculture. “They (Islamic State) even destroyed trees, everything. Now are lands are like a desert.”

Hanna quietly fiddled with a tissue, then quickly wiped tears from her eyes as she listened to her husband.

As if to reassure his wife, Michael adds: “I believe if it wasn’t for our faith in God, we wouldn’t have gotten this far.”

In Lebanon, they are staying with Hanna’s brother and his wife — Milad and Amira — who fled to Lebanon in January, also from the village of Tal Maghas. Milad found work as a custodian for an apartment building in Fanar, a suburb of Beirut. It provides the couple with small living quarters and a monthly stipend that barely covers the cost of food.

Located on a hilly incline, the residential area is dominated by concrete buildings and a tangled web of electrical wires amid constant traffic, a sharp contrast to the green agricultural plain back home in Tal Maghas.

Michael says his family is fortunate to have a place to stay. “For a few days, it’s OK,” adding that he does not want to impose on his brother-in-law. “I have to provide for my family.”

“We are grateful to have our church leaders who are doing what they can to help us. But we feel abandoned by the rest of the world.”

The Assyrian Church of the East in Beirut says that more than 1,300 Assyrian families have fled to Lebanon since the conflict in Syria started, and about 100 Assyrian families arrived from Iraq after the Islamic State’s takeover of Mosul and the Ninevah Plain last summer.

Economically strapped Lebanon is now hosting more than 1.5 million refugees — mostly Syrians — putting a strain on the country’s infrastructure and resources for its existing population of around 4 million people.

“Unfortunately, it seems the situation is not going to end very soon,” Chorbishop Yatron Koliana of the Assyrian Church of the East told CNS, adding that “if we have safety in Syria, many families would go back.”

His Lebanese parish established the Assyrian Relief Committee in 2012 to assist Assyrian refugees. For example, funds raised by the committee cover tuition for 120 Assyrian Syrian children and 40 Assyrian Iraqi children at the 200-student St. George Assyrian School adjoining the church in Beirut. Prior to the refugee crisis, the small school’s enrollment included a mix of Lebanese-born Assyrian students, Christians from other denominations and Muslims.

Chorbishop Koliana lamented that the international community “has no clear action plan.”

“Many initiatives were taken by the international community to avoid the extinction of some types of animals. Isn’t it worth it to protect our people?” he said.

“We urge the international community to create a safe haven for Assyrians,” Chorbishop Koliana added. “We only need a safe place to live and protect our civilization and existence.”

In the meantime, as Michael tries to build a new life for his family, he maintains: “I will never lose my faith. Even with all we’ve gone through, I rely even more on my faith now.”

NEXT: Patriarch rejects calls for outside military intervention in Syria