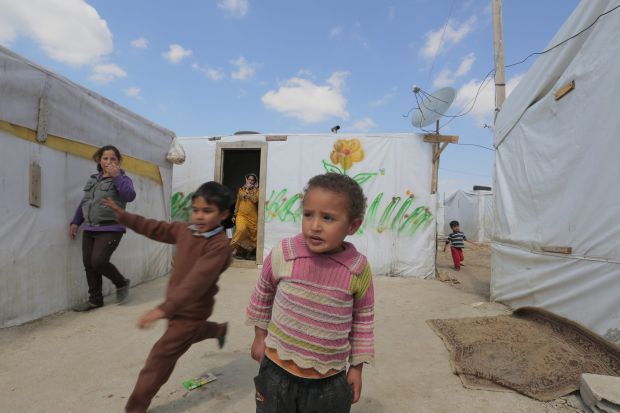 VATICAN CITY (CNS) — Without family, a legal identity and adequate education, children uprooted by the ongoing violence in Syria and the Middle East “are at risk of becoming a lost generation,” said Archbishop Silvano Tomasi, permanent observer of the Holy See to the United Nations in Geneva.

The archbishop noted that “children suffer the brutal consequences” of war and called for a “comprehensive system of protection for children” in these conflict zones.

“In camps throughout the Middle East, children constitute approximately half of the refugee population and they are the most vulnerable demographic group,” he said during a session of the U.N. Human Rights Council March 17.

Archbishop Tomasi noted the grave situation of these children: Many are separated from their families, live in poverty and have difficulty accessing basic services. In this defenseless state, some are recruited and trained as soldiers or used as human shields.

Islamic State militants have “worsened the situation by training and using children as suicide bombers, killing children who belong to different religious and ethnic communities, selling children as slaves in markets, executing large numbers of boys and committing other atrocities,” the archbishop said.

Archbishop Tomasi underlined three issues regarding the protection of children in these conflict zones.

“Stateless children cross international borders alone and find themselves completely abandoned,” he said. Children below age 11 and “without documents” do not have access to basic services, cannot go to school and “are likely to be adopted illegally, recruited in an armed group, abused, exploited or forced into prostitution,” he said.

Furthermore, there are several thousand children “scattered in camps and other asylum countries” who have not been registered as refugees.

“These are ‘phantom kids’ whose parents have escaped from Syria but whose name and date of birth were never registered at any office,” the archbishop explained.

Child statelessness can be addressed by “simplifying mechanisms and requirements for registration, waiving fees (and) advocating for refugee inclusive registration legislation,” he suggested.

The second issue is the “urgent need for an education system” in refugee camps, especially since it is now clear the refugee situation is not temporary, as initially thought, he said. Currently, the teacher-student ratio in the camps is about 40-to-1,000 and only 50 percent of Syrian child refugees living in neighboring countries receive education, he said.

He cited statistics that about 5,000 schools in Syria were destroyed while others remain under attack, leaving 1.5 million children without schooling. Islamic State militants closed schools in areas under their control, he said.

The third issue is that the “generalized violence” leads to the breakdown of families, forcing “many minors to fend for themselves,” he said.

“An additional effort should be made to facilitate the reunification of minors with their respective families,” the archbishop urged. He emphasized that peace in the region is “the priority for healthy growth of all children.”

The Independent International Commission of Inquiry on the Syrian Arab Republic reports more than 10 million Syrians — almost half of the country’s population — are displaced and more than 3 million Syrians are refugees in neighboring countries.