Attacks on Christians in Pakistan are pattern of martyrdom 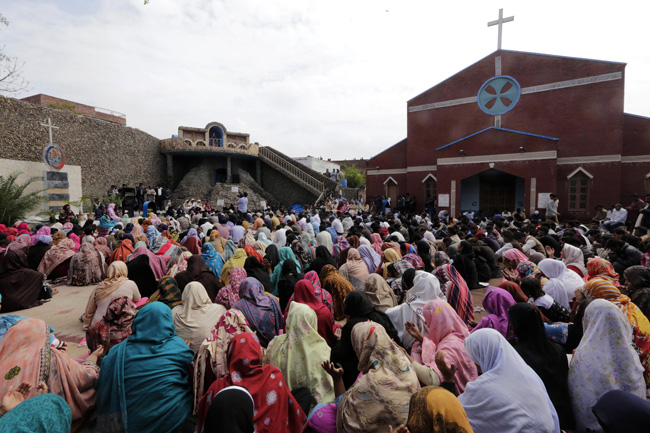 VATICAN CITY (CNS) — Condemning deadly terrorist attacks against a Catholic and an Anglican church in Pakistan, Pope Francis said “the world is trying to hide” a wave of anti-Christian persecution in various parts of the globe.

“With sadness, with much sadness, I learned of the terrorist attacks today against two churches in Lahore … provoking numerous deaths and injuries,” the pope said March 15 after reciting the Angelus with visitors gathered in St. Peter’s Square.

Suicide bombers that morning detonated themselves outside the churches, which are both in the same predominantly Christian neighborhood. Officials said 15 people were killed and more than four dozen were injured by the blasts.

Particularly with the persecution of Christians in Syria, Iraq and Nigeria, Pope Francis frequently has denounced the growing wave of anti-Christian violence, a violence that is not simply a matter of restricting religious freedom, but a martyrdom of Christians.

At a Mass in early February, when the Gospel reading recounted the killing of St. John the Baptist, Pope Francis said it made him “think of our martyrs, the martyrs of today, those men, women and children who are persecuted, hated, chased from their homes, tortured and massacred. This is not something from the past; it is happening today. Our martyrs are ending their lives under the corrupt authority of people who hate Jesus Christ.”

In Pakistan, Archbishop Joseph Coutts of Karachi, president of the Pakistan Catholic Bishops’ Conference, urged the government “to take strong measure for the protection of the churches and religious minorities in Pakistan.”

“The government, political parties, religious leaders and every citizen of Pakistan (should) stand against extremist forces and with their Christian brothers and sisters,” the archbishop said in a statement, adding that “the whole nation should join hands and stand against terrorism.”

He pleaded with federal and provincial governments “to take effective measures in providing security to the churches throughout Pakistan to ensure freedom of religion and belief.”

The Pakistani Taliban claimed responsibility for the assault in a statement emailed to reporters, and warned, “There will be more of such attacks.”

In a separate statement, Archbishop Sebastian Shaw of Lahore demanded “strong action (be) taken against the perpetrators and that the guilty should be brought to justice.”

Archbishop Shaw said all archdiocesan institutions would remain closed March 16 and urged the provincial government of Punjab, with Lahore as its capital, “to protect the religious minorities.”

The Justice and Peace Commission of the Pakistani bishops’ conference issued a statement March 16 lamenting the “minimal” protection the government offered to Christians, despite the fact that threats against Christians had been made in the days before the attack.

The police “present at the moment were busy watching a cricket match on television instead of fulfilling their task of protection the churches. Consequently, because of their negligence, many Christians lost their lives,” said the statement, which was reported by Fides, the news agency of the Congregation for the Evangelization of Peoples.

Contributing to this story was Anto Akkara in India.

NEXT: Teachers’ low pay is ‘an injustice,’ pope says