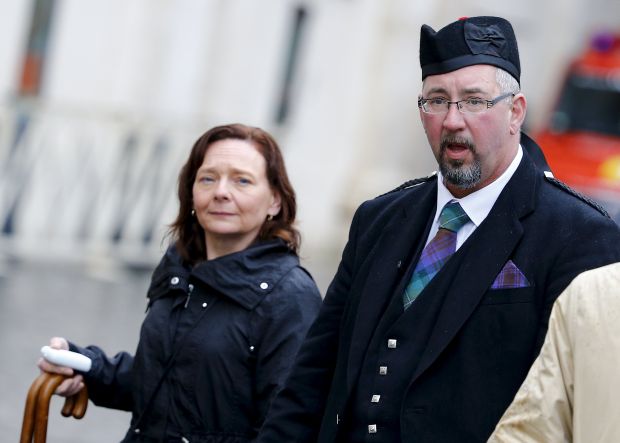 VATICAN CITY (CNS) — After Pope Francis encouraged him and pledged his prayers, Michael Haines was able to tell the pope about his work to promote interreligious dialogue and mutual respect, particularly between Christians and Muslims.

Haines’ brother David, a British aid worker, was beheaded by members of the so-called Islamic State in Syria in September.

Michael Haines met Pope Francis March 25 at the end of the pope’s weekly general audience. He was accompanied by Barbara Henning, widow of aid worker Alan Henning, another of the IS victims, and by Shahnawaz Haque, a Muslim scholar and psychotherapist.

In a tear-filled interview with Vatican Radio’s Philippa Hitchen, Michael Haines said that as soon as he went up to the pope, his mind went blank. “I get quite nervous,” Haines said, and the pope could see that. “So he made me feel at ease by speaking to me first.”

The pope, he said, told Haines that he prayed for his brother, for his whole family and for Haines’ work of fighting the Christian-Muslim tensions sown by the Islamic State rebels and other terrorists who “are trying to polarize our communities.”

“I have a little knowledge of Islam, and I know that the faith, like many other faiths, is about understanding and tolerance. It’s about welcoming. It’s about giving strength,” he told Vatican Radio.

What the IS rebels are doing and what they did in the case of his brother, he said, “is using the name and the religion of Islam for justifying their actions, and it’s wrong. They are not Muslim, they are not religious. They are not men. They are trying to force our communities apart.”

Muslims have apologized for what the IS terrorists have done, he said. But he tells them, “There is nothing to forgive. ‘They (IS) aren’t of your people, they aren’t of your religion. They are using it as an excuse.”

Haines said one Muslim told him the terrorists not only decapitated David, but “they’re decapitating our religion.”

“We all live in a multifaith, multiethnic community,” Haines told Vatican Radio. “If we let them polarize us, and push us farther apart, there’s only one step from that fear to violence. Whereas, if we can stand up and say, ‘Welcome. Let me learn about your society while you learn about my society,’ then we are closing that gap.”

NEXT: Laicized Polish priest gets seven years in jail for child sexual abuse