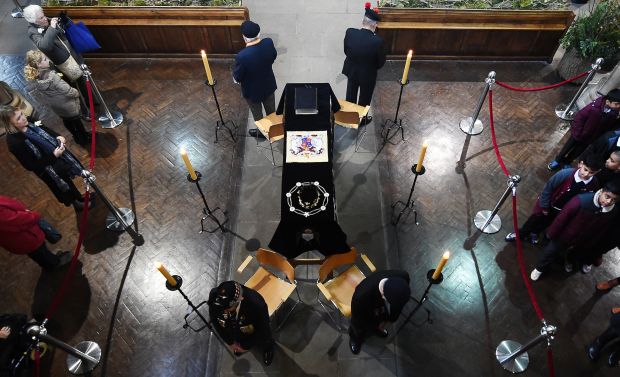 Guards surround the coffin of King Richard III as his remains lie in repose at Leicester Cathedral during the public viewing of his coffin in Leicester, England, March 23. (CNS photo/Andy Rain, EPA)

MANCHESTER, England (CNS) — One of England’s last Catholic kings was reburied three years after his skeleton was discovered in a coffin beneath a parking lot.

King Richard III — the last monarch of the Plantagenet dynasty and the last English king to die in battle — was originally buried by Franciscan friars in Leicester, a city in the Midlands, after he was slain at the Battle of Bosworth in 1485.

The priory was dissolved during the Protestant Reformation of the 16th century and it was widely believed that the king’s bones had been thrown into a river.

But excavation work on the site of the priory in 2012 unearthed the remains and on March 26 they were re-interred in Leicester Cathedral after five days of commemorations.

The events began with an interfaith service of compline in the Anglican cathedral March 22 during which Cardinal Vincent Nichols of Westminster, president of the Bishops’ Conference of England and Wales, preached a homily.

The cardinal described King Richard as a “child of war” who spent much of his early life as a refugee before he seized power “on the battlefield and only by ruthless determination, strong alliances and a willingness to employ the use of force, at times with astonishing brutality.”

But he also said the king was “a man of prayer, a man of an anxious devotion” who founded chapels, or “chantries,” where Mass was offered specifically for the souls of those who died in the battles of the civil wars that raged in England during the 15th century.

On March 23, Cardinal Nichols celebrated a Requiem Mass for the repose of the soul of the king at the Holy Cross Priory of the Dominican order. He wore the Westminster Vestment, a chasuble dating from the reign of Richard and which might have been seen by him during Masses at Westminster Abbey in London.

Afterward, Bishop Mark Davies of Shrewsbury, England, who attended the Mass, said “what was most striking was that King Richard III received the same funeral Mass as any other Catholic. We prayed for the eternal repose of his soul, commending him to God’s mercy.” 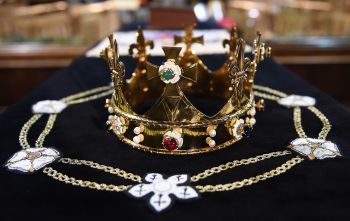 “It also seemed appropriate that a king who insisted that prayers and Masses be offered for all who had died on each side of the violent conflicts which marked his lifetime should have been likewise remembered in the prayer of the Mass in Leicester,” he said in a March 23 email to Catholic News Service.

In the days that followed, more than 20,000 people visited the king’s coffin in Leicester Cathedral.

The March 26 reburial service was presided over by Anglican Archbishop Justin Welby of Canterbury.

It was attended by Sophie, Countess of Wessex, representing Queen Elizabeth II, and by actor Benedict Cumberbatch, a distant relation of Richard, who read a poem.

During the service, Anglican Bishop Tim Stevens of Leicester, said: “People have come in the thousands from around the world to this place of honor, not to judge or condemn but to stand humble and reverent.”

He said: “Today we come to give this king, and these mortal remains, the dignity and honor denied to them in death.”

Richard III, whose skeleton revealed the spinal deformity depicted by William Shakespeare in his history play, seized power in 1483 when he declared the children of the late King Edward IV to be illegitimate. His reign lasted a little more than two years.

NEXT: Brother of slain aid worker talks with pope about dialogue, respect