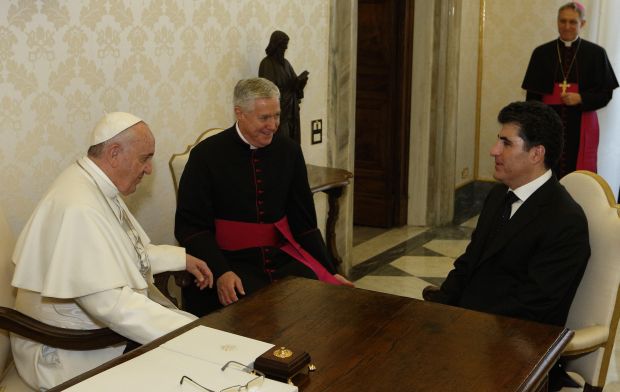 BEIRUT (CNS) — A pontifical aid organization has begun sending aid to families who fled their homes when Islamic State militants raided a cluster of Assyrian Christian villages on the Khabur River in northeast Syria.

The Catholic Near East Welfare Association, upon learning about the Islamic State attacks, contacted Bishop Aprim Nathniel of the Assyrian Church of the East in Hassakeh, with whom the agency had collaborated on previous projects, said Michel Constantin, CNEWA’s regional director for Lebanon, Syria and Egypt.

“What we learned from Bishop (Nathniel) is that so far, there are around 900 families that have been displaced from around 18 villages out of 35,” Constantin told Catholic News Service Feb. 27 from Beirut. “Another 200 families are expected to come as soon as the fighting cools down a little bit.”

He said most of the 900 displaced families have been temporarily settled in homes in Hassakeh abandoned by fellow Christians — Assyrians, Syriac Catholics and Syriac Orthodox — who had earlier fled out of fear because Islamic State groups were very close.

“There were many individual houses that were vacant, so the bishop took the initiative to open these houses, knowing that nobody would mind,” Constantin said. Although the homes are furnished, the displaced families were in urgent need of food, heating fuel, gas for cooking and medication.

“It’s very important to reach out to them with something very basic to sustain them at least for a couple of weeks,” he said. As a first step, CNEWA arranged to send 900 food packages, enough for each family for that initial period.

However, delivering aid or money to Syria is complicated.

“It’s a very long process to buy food from the outside and send it to Syria. It’s not feasible, it takes too much time,” Constantin explained. Furthermore, transporting goods is perilous because there are daily raids by Islamic State along the only road that links Hassakeh to Qamishli.

Under such circumstances, Constantin says it is more efficient to send money to purchase whatever is available locally, but due to the conflict, there is no banking system working in Hassakeh to send funds via bank transfer.

He said CNEWA was working with an Iraqi aid agency able to get the funds into Syria.

“Without this contact in Iraq we could not be so efficient,” he said.

As a first step, CNEWA sent around $36,000 to buy 900 food packages for $40 each. The agency determined from its work in Syria that $40 can sustain a family of five with food for about two weeks.

“It’s a top priority for us to help these people at this moment and then we can coordinate with other partners to see how more grants, more funding can be conveyed to them,” he added.

But as the conflict in Syria enters its fourth year this month, Constantin noted the world has “donor fatigue.”

“We have the responsibility to convey the message that the suffering is increasing, not decreasing,” he pointed out. “As time passes, people are really suffering more. They are really afraid and need more help.”

“People should donate more for the Syrian crisis and for Christians in the Middle East in general because in this part of the world as time passes, things get worse,” he added.

At the Vatican March 2, Nechirvan Barzani, prime minister of the Kurdistan regional government of Iraq, met Pope Francis to discuss concerns about Islamic State extremists and the fate of religious and ethnic minorities in the Middle East. A statement released by the Kurdistan regional government said Barzani asked Pope Francis to encourage international community to provide more humanitarian aid.

The Council of Catholic Patriarchs and Bishops in Lebanon, following a plenary session March 2, met with the Vatican nuncio to Lebanon, Archbishop Gabriele Caccia, and addressed the urgency to press the international community to end the war in Syria and find sound solutions in both Syria and Iraq. Resettling Christians in their home countries and securing assistance to help those who have been displaced within and from Syria and Iraq was also a key issue.

PREVIOUS: Assyrian Christians released, but many concerned for those still held

NEXT: Vatican security always on high alert, chief says after IS threats