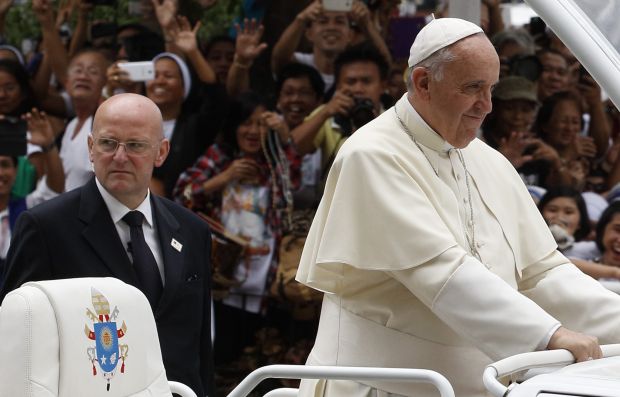 Domenico Giani, commander of the Vatican police force, keeps watch as Pope Francis arrives to celebrate Mass with bishops, priests and members of religious orders in the Cathedral of the Immaculate Conception in Manila, Philippines, in this Jan. 16, 2015, file photo. Giani said that he is not aware of any plans to attack the Vatican or the pope although Islamic State militants have made general threats. (CNS photo/Paul Haring)

VATICAN CITY (CNS) — The head of Vatican security said Islamic State militants have threatened the Vatican, but there are no indications of any planned attack.

The Vatican gendarmes, Swiss Guards and the Italian state police that patrol the perimeter of Vatican City State are always on high alert, said Domenico Giani, the commander of the gendarme and the pope’s chief bodyguard.

“There are not only the threats of the Islamic State, but also the risk of action by individuals, which is more dangerous because it is unpredictable,” he said in an interview for the March edition of Polizia Moderna, the monthly magazine of the Italian state police.

For months, there have been rumors of threats against the Vatican or Pope Francis by the Islamic State militants who are attacking Christians, other religious minorities and Muslims they do not agree with in Syria and Iraq. Concern heightened in February when militants claiming to be allied with the Islamic State group murdered 21 Christians in Libya, which is less than 300 miles from the Italian mainland.

“The threat exists,” Giani said. “That is what has emerged in meetings with my Italian and foreign colleagues. But the existence of a threat is one thing and planning an attack is another. At this time, we have not been informed of any plans to attack the Vatican or the Holy Father.”

Giani, who worked in the Italian secret service before moving to the Vatican, said he is in frequent contact with Italian and other government intelligence services, including some from predominantly Muslim countries. “I can say that today the pontiff is seen and respected by Muslims as the most influential moral authority in the world — and that is on the part of both religious and civil leaders.”

Asked how Pope Francis is living with the threat, Giani responded: “The Holy Father does not intend to abandon the style of his pontificate, which is based on proximity, that is, on a direct encounter with the greatest number of people possible. Even as pontiff, he has remained a priest who does not want to lose contact with his flock.”

“Those of us entrusted with his security must adapt to his style and not the other way around,” he said. “We must do everything possible so that he can continue to carry out his ministry as he wants and believes is best.”

Giani said Pope Francis “is well aware of the threats” against him, “but his only concern is for the faithful.”

The Apostolic Palace, where Pope Francis chose not to live, “is more difficult to access” than the Domus Sanctae Marthae, where he has taken up residence, Giani said. “But as I said, the Holy Father has chosen a way of living and does not intend to change it because of a potential risk.”

In addition to his constant collaboration with the Swiss Guard and Italian police forces and his contact with a variety of security services, Giani said the Vatican is aided by a high-tech operations center and “thousands of security cameras installed” in Vatican City and in Vatican buildings around Rome.

Asked if his office ever taps telephones, he said, “it happens sometimes,” but rarely.

NEXT: Nigerian bishops criticize Boko Haram’s use of kids as suicide bombers