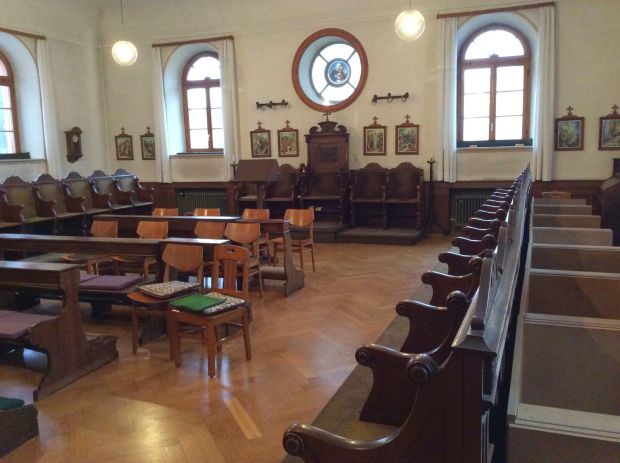 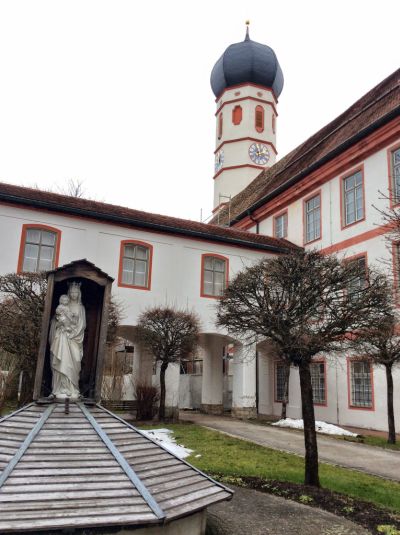 Beuerberg Abbey in Beuerberg, Germany, as seen Jan. 9. The 12th-century monastery will house up to 60 refugees from Syria, Iraq, Nigeria, Afghanistan and other conflict zones. (CNS photo/Anian Christoph Wimmer)

BEUERBERG, Germany (CNS) — Cold winter light is streaming through the ancient windows of Beuerberg Abbey. It plays on the wood of the empty choir stalls, shimmers on the bronze hand bell of the prioress. Everything is quiet and ready for the next prayer.

But this bell will likely never again break the silence of these walls. The last nuns of Beuerberg have left. The monastery, founded in 1121, today stands empty in the snowy landscape of the Alpine foothills.

“Oh, this is not the end! On the contrary,” said Sister Maria Lioba Zezulka, prioress of the Visitandine order, flashing a smile. “This is a new beginning on several wonderful levels! And not just for the refugees who may soon have a home within these walls.”

Sister Lioba and the Archdiocese of Munich and Freising have worked a deal to house refugees in the abbey. They hope that, within a few months, families from Syria, Iraq, Nigeria, Afghanistan and other conflict zones can find a home here.

“Till then, we need to get a lot of building permissions and works organized,” said Gabriele Ruttiger, head of strategy and organizational development for the archdiocese.

Msgr. Peter Beer, archdiocesan vicar general, sees Beuerberg Abbey as a test case and model for the future use of the more than 100 monasteries across Upper Bavaria, a growing number of which are threatened by the drastic decline in vocations.

Record numbers of migrants and asylum seekers are pouring into Europe, and most of them are headed to Germany. As the U.N. refugee agency reports, Germany has been — and continues to be — the recipient of the largest number of asylum applications, followed by France, Sweden, Italy and the United Kingdom.

The number of asylum seekers arriving in the state of Bavaria is especially high: The railway lines from Italy and southeastern Europe, via which many refugees enter the country, end in Munich. In 2014 alone, Bavaria spent more than 234 million euro on housing and feeding the refugees. With more arriving each day, housing in the expensive region is at an absolute premium — and the idea of providing shelter in a former monastery immediately struck a chord with church strategists, the nuns and local citizens in the village of Beuerberg. 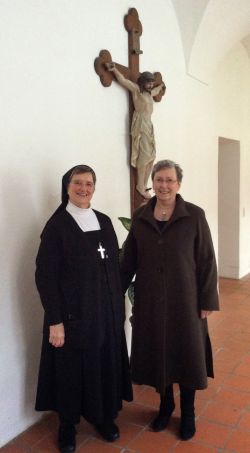 Sister Maria Lioba Zezulka, prioress of the Visitandine order,
and Gabriele Ruttiger, head of strategy and organizational development for the Archdiocese of Munich, pose for a photo inside Beuerberg Abbey in Beuerberg, Germany Jan. 9. (CNS photo/Anian Christoph Wimmer)

“So this is where we could house up to 60 refugees,” Ruttiger said, standing in the St. Joseph wing of Beuerberg Abbey. The deserted building has spacious rooms with high ceilings and panoramic views of the Alps. Until 2007, ethnic Germans migrating from the former Soviet Union were housed here.

Working with the Knights of Malta, the archdiocese plans to provide a range of services for the new inhabitants of the abbey: psychological counseling, German-language lessons and assistance with state services.

In 2013, the prioress of Beuerberg died of old age, and the remaining 13 nuns, on average over 80 years old, needed help. Sister Lioba, whose order is also known as the Salesian Sisters, moved in with the remaining sisters and prepared for the transition.

Sister Lioba found new homes for her aging sisters, who, after much prayer and soul-searching, unanimously agreed to leave Beuerberg. The elderly sisters even wrote a specific prayer for the challenge. After months of contemplation, negotiations and meetings, two other orders agreed to take the remaining sisters into their respective fold.

“It was the hardest thing I’ve had to do, but also one of the most rewarding and wonderful,” she said.

Sister Lioba tried to sell the abbey, and when she could not, she contacted Cardinal Reinhard Marx of Munich and Freising. He and Msgr. Beer immediately saw what was at stake and secured the support of the archdiocesan administration, managing to organize an offer that made “the sisters cry with joy when they received news of this positive turn of events,” as the prioress recounted.

Now the nuns are able to live out their days in a cloistered environment among sisters, paid for by diocesan funds. At the same time, the archdiocese took over the abbey.

Sister Lioba is enthusiastic about the prospect of refugees finding a home at Beuerberg Abbey.

“The nuns are still praying for their abbey, you know. And for all the people who will live there in future, no matter who they are,” she said.

PREVIOUS: Feed my sheep: Why shepherding is ideal internship for church leaders

NEXT: Show value of life by affectionately caring for elderly, pope says