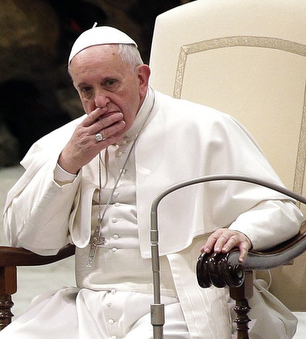 VATICAN CITY (CNS) — The most serious ailment the aged face and the greatest injustice they suffer is abandonment, Pope Francis said.

“Those who helped us grow must not be abandoned when they need our help, our love and our tenderness,” the pope told members of the Pontifical Academy for Life March 5.

The academy was beginning a three-day meeting focused on “assisting the elderly and palliative care.” A day earlier, Pope Francis had used his weekly general audience to focus on the way the aged are treated in modern societies and on the role they have in the family.

At the audience March 4, he said that seeing the elderly only as a burden “is ugly. It’s a sin.”

Meeting the next day with members of the Academy for Life and with physicians and nurses who specialize in hospice and palliative care for the dying, the pope emphasized the importance of bringing medical personnel and the elderly person’s family together in providing true care to the patient.

The affection of a family cannot be replaced “even by the most efficient structures or the most competent and charitable health care workers,” he said.

Pope Francis said he wanted to encourage professionals and students to specialize in hospice and palliative care, which “is no less valuable just because it is not about saving lives.”

Instead, he said, palliative care accomplishes something “just as important: it recognizes the value of the person.”

As people age, the pope said, the medical community in general tends to offer them less care and they can, in fact, be abandoned. “Abandonment is the most serious ailment of the aged and also the greatest injustice they can endure.”

Belief in the sacredness and dignity of every human life means that “when a life becomes very fragile and approaches the conclusion of its earthly existence, we have a responsibility to help it and accompany it in the best way possible,” the pope said.

“Palliative care has the objective of alleviating suffering in the final phase of an illness while, at the same time, providing an appropriate human accompaniment” as the person prepares for death, he said.

The noblest aim of medical science, he said, is to promote the good of the patient, “a good that can never be achieved by going against life and dignity.”

Obeying the biblical command to honor one’s father and mother — to honor one’s elders, Pope Francis said, “today can be translated as the obligation to have extreme respect for and take care of those who, because of their physical or social condition, could be left to die or ‘made to die.'”

NEXT: In Pope Francis, church is reaching the world’s ‘seekers’